They see me rovin’ 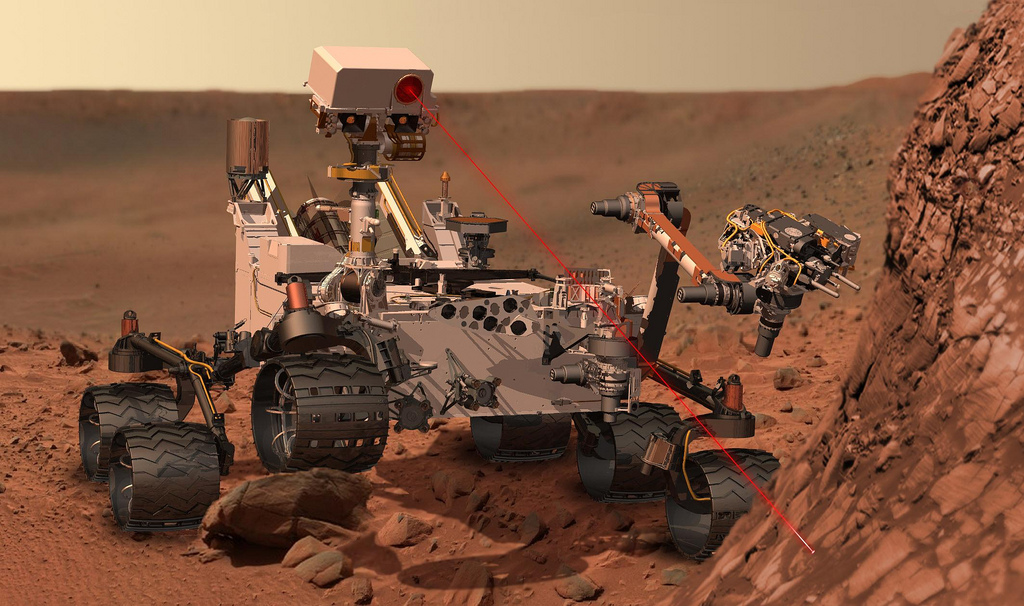 In November 2011, NASA launched their largest rover yet on a mission to explore the conditions on the planet Mars. The aptly named “Curiosity” rover landed on Mars in August 2012 and has been examining the planet ever since.

Curiosity is part of an important research programme of NASA’s, with its main aims to probe the geology and climate on Mars. One of the biggest questions, which is still to be answered, is whether or not Mars may have at one point been able to support forms of life such as bacteria.

This is only one of NASA’s ongoing missions to explore our solar system in search of places in which microbial life may have once survived; of which the Cassini-Huygens mission is another example. Cassini is a satellite which was sent to in 1997 to orbit its rings and moons; paying particular attention to the moon Titan. Huygens is a rover which landed on Titan in 2005. Like Mars, it is thought possible that Titan may have at one point been a suitable habitat for microbial life to thrive. Unlike Mars, however, on Titan the life would not be similar to life as we know. This is because on Titan, instead of a water cycle there exist rivers and clouds of hydrocarbons, such as methane. Life on Titan would have had to, instead of oxygen, use nitrogen for respiration.

Little is still known about the conditions on both Titan and Mars, and it is the role of the rovers such as Huygens and Curiosity to change this.

Curiosity is basically a portable experimental laboratory. Weighing almost 900kg, it carries equipment ready to measure biological, geological, chemical and physical features on Mars. Upon chosing an interesting feature of rock, Curiosity can examine the composition of the rock using an infrared laser. Furthermore, it holds a microscope and an x-ray spectrometer with which it can analyse the rock in more detail if it is necessary. It also has the ability to drill into the rock – which is of particular interest in examining for example water below the surface.

In addition to these instruments, the rover carries two computers. These have made science headlines recently since last week, on the 28th February, one of these computers broke. NASA have put the rover into ‘safe mode’ while this glitch is fixed and the rover is being run by a back-up computer called the B-side. It does not seem to be a devastating problem, since the rover tweeted last Friday – ‘Don’t flip out: I just flipped over to my B-side computer while the team looks into an A-side memory issue.’

Curiosity is part of an extremely important Mars Science Laboratory mission. If you were to judge the importance of the Mars Curiosity Rover purely by it’s twitter profile, however, you could easily be mislead. In an attempt to encourage interest from youngsters, NASA have invested a lot of money into the promotion of the Rover and this has led to the creation of the twitter account @MarsRover. While the news updates posted by the rover remain informative, they are often filled with puns and parodies of song lyrics.

My personal favourite habit of the rover on twitter is to post ‘selfies.’ The rover has an extendible arm on which cameras are attached, which it uses to take pictures of itself with various types of rock. These undoubtedly have scientific significance and are important to the mission, but I am a supporter of Curiosity purely because of its ability to tweet photos like a teenager. Curiosity also seems to favour rap music as it has tweeted in the past the likes of Chamillionare ‘They see me rovin’…’ and indeed Jay-Z ‘Get…That…Dirt off your boulder.’

Curiosity has been depicted even in the format of a parody music video named ‘Cool things to find’ which was tweeted along with the caption: ‘Found on Mars: Lost socks? No. Twinkies? No. Face-hugger? HOPE NOT! Adorable video? Yes.’

In my opinion, the team at NASA working on the Curiosity rover have managed to create the perfect balance between cutting-edge science and fantastic science communication. News about the rover is available through the NASA website and is made entertaining and interesting through songs and pictures, without losing the important information about the research that is ongoing.

Curiosity still has years to explore Mars and create more puns – keep in the know by following it at @MarsRover and #staycurious.