The Latest News from the Durham University Solar Car Team

I first learnt about Durham University Solar Car when they’d just beaten Cambridge’s equivalent in at the Greenfleet Arrive’N’Drive Event in 2010 (watch it here). Since then the team has had a new breath of life and continues to go from strength to strength. Read on to find out about all of the exciting new developments, as well as plans for the future, from the Solar Car team. 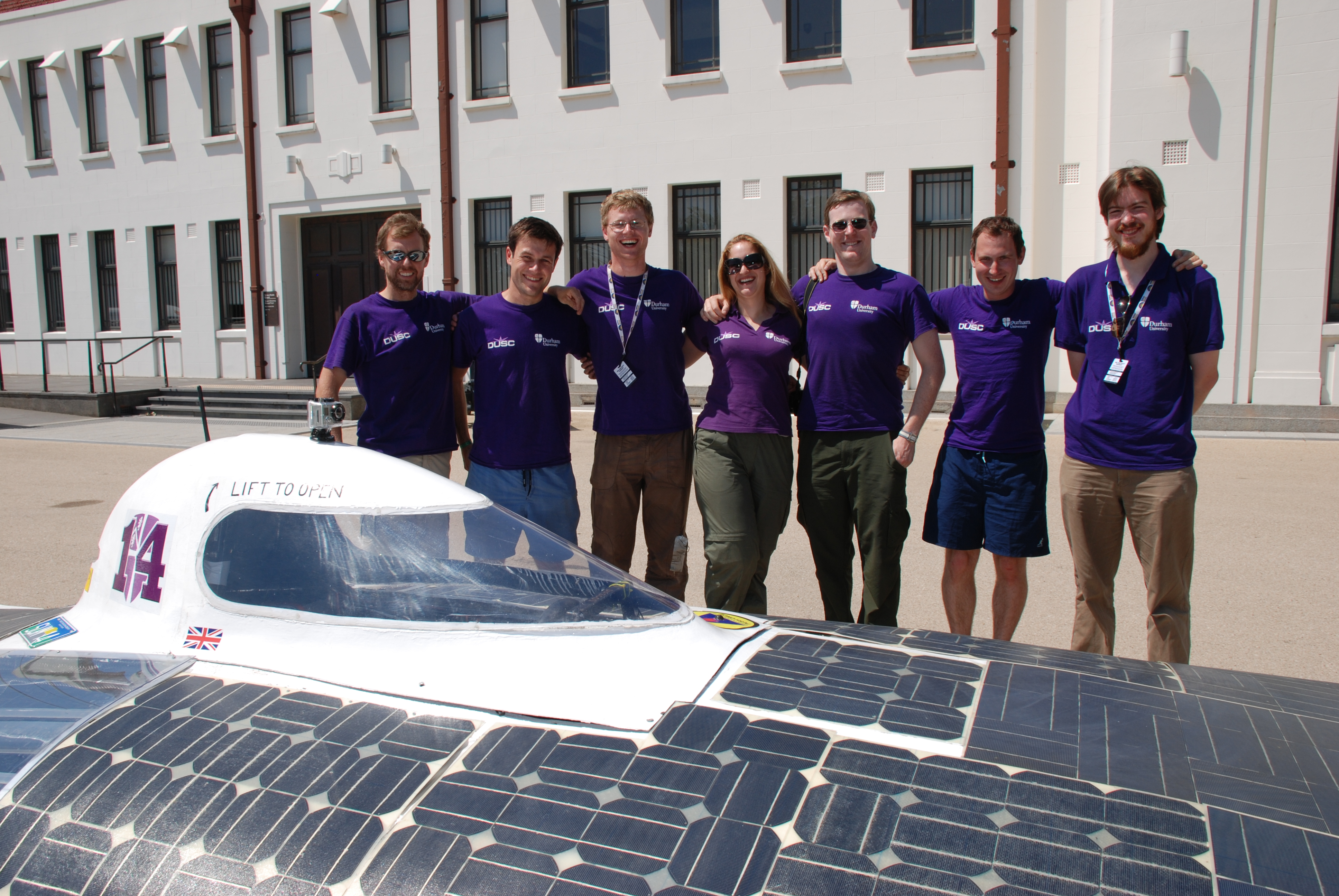 The team with the Solar Car

DUSC recently announced its bid to compete in the 2013 World Solar Challenge, in Australia. The WSC is a biennial competition usually running in October, and features the top solar car racing teams throughout the world. The race begins in Darwin to the north, covers 3000km of searing outback and concludes in Adelaide to the South. Participants must make the journey entirely under their own (solar) power.

DUSC was originally established in 2004 and is an entirely student-led project, supported by senior academic staff within the university’s School of Engineering & Computer Sciences. The team is made up of diverse and enthusiastic students from a wide range of backgrounds, including engineering, physics, computer science and geography. DUSC is funded entirely from third-party sponsorship.

The car comprises a steel space frame chassis within a carbon-fibre bodyshell, and can reach speeds of up to 60mph. The car is powered by a solar array rated at 1.4kW (less than a kettle) and as such is designed with maximum efficiency is mind. A number of the car’s components and systems were designed and implemented as part of final year student research projects.

The team’s first major competition was the 2008 North American Solar Challenge, in which they were the only British team to compete. After a route totalling 2400km from Dallas, Texas to Calgary, Alberta, Canada, DUSC finished 14th out of 26 competitors, earning the ‘Best Rookie Team’ Award. More recently, DUSC successfully completed the 2011 Veolia World Solar Challenge.

DUSC is planning to develop an all-new vehicle for 2013, with ambitious goal to finish in the top 10 at next year’s World Solar Challenge. Team leader Chris Hartnoll thinks this is very possible “The team has a very strong technical record going forward, having qualified ahead of leading teams like MIT and Cambridge at the WSC. Our Solar panels let us down in Australia, delivering about half of their rated power. For the 2013 WSC we’re upgrading to a new £20,000 solar package, building a new carbon fibre monocoque chassis (reducing the weight of the car by 80 kg) and developing a new custom motor that is predicted to achieve higher efficiencies than the CSIRO Motor [currently used by many of the leading teams] Building on our previous success I believe this team can achieve a top ten position in Australia next year.” 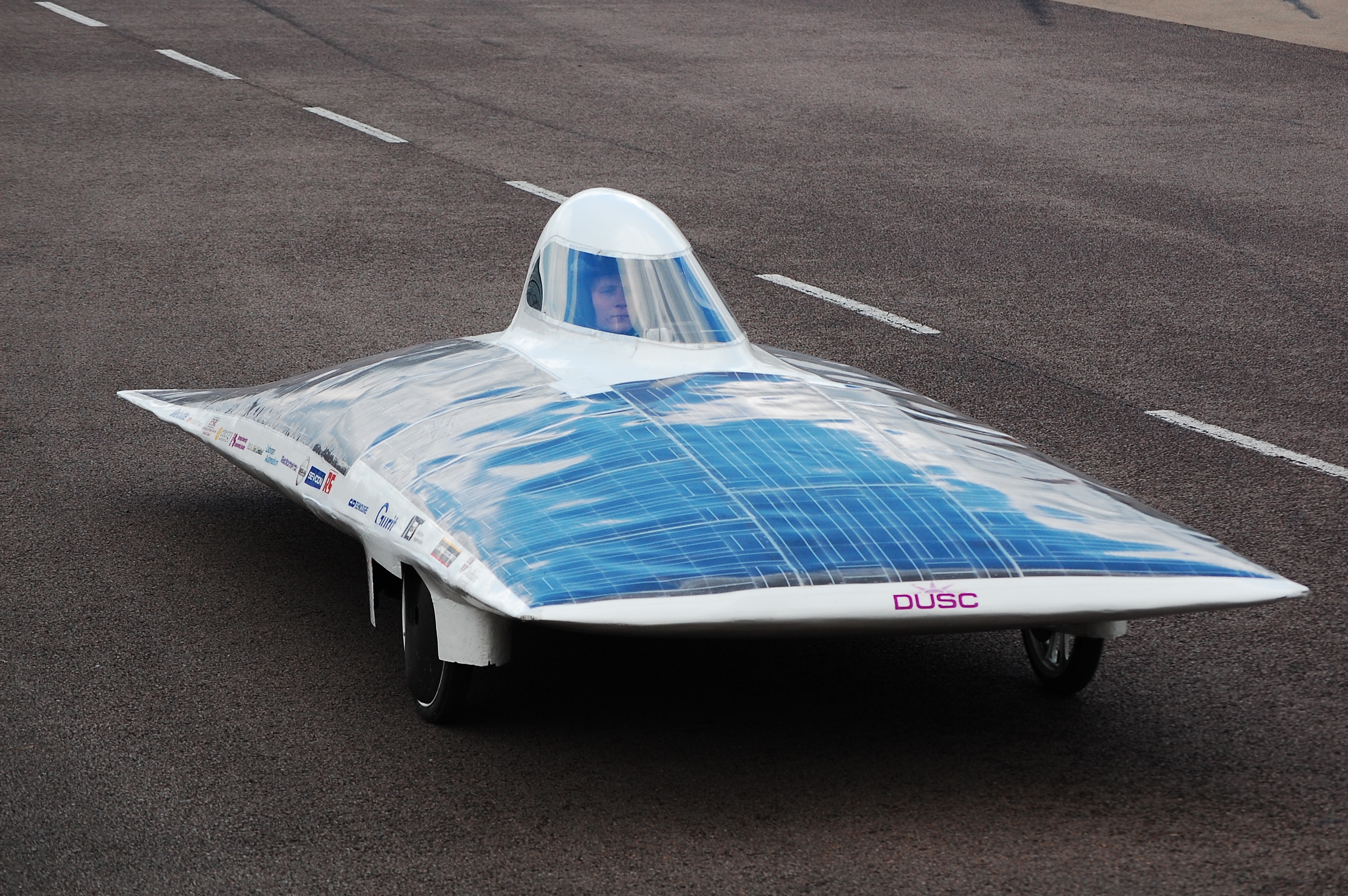 The Solar Car out on the track

DUSC is also looking to make more of an impact closer to home. “What became apparent to us this year was that there was very little awareness of the Solar Car within our own university, let alone the UK”, explains logistics manager David Roe. “We are looking to address that problem first by expanding the profile of the car and diversifying the team across all departments. We will then look to create closer ties with local schools and businesses, and strengthen collaboration between the other UK university teams in Cambridge, UCL and Wrexham. We have already brought in plenty of new people into the team this year, and there is a real buzz around the garage!”

The Solar Car will be vacationing at the Warwickshire Heritage Motor Centre over the Easter holidays, but on returning, the team have big plans. “We have just begun a large-scale sponsorship and recruitment drive with a view to the race in 2013”, says David Roe. “This includes an exciting, Top Gear style competition to select our new driver for next year. We also hope to take part in one or two other big events before the summer is out!”