The Joy of Scaling 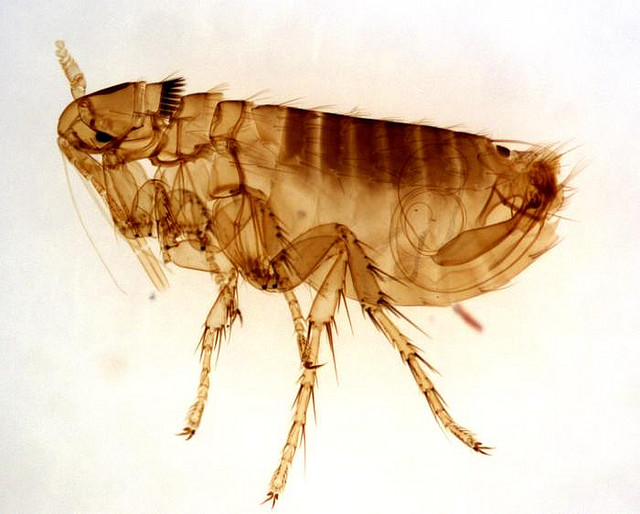 Fleas: not going to be leaping cathedrals any time soon

Suppose you took a fairly average human and scaled them up by a factor of ten, making them sixteen or seventeen metres tall but keeping their proportions fixed. Unfortunately for your subject (victim?) their mass scales in proportion to the volume of their body and so will be 103=1,000 times greater, while bone strength scales according to the cross-sectional area of the bone and will only be 102=100 times greater. The messy result will be a tenfold increase in their weight/bone-strength ratio, broken limbs and probably a stern letter from your ethics committee.

While this example is clearly silly it illustrates an important point: different structures work at different sizes. Films often treat size as an arbitrary variable tacked on to an organism, but in fact scale is crucial to functionality. A fully grown tree is not simply a scaled-up sapling and wouldn’t last long if it was; similarly, you can’t have an ostrich-sized sparrow or an elephant-sized guinea pig without major physiological changes. This kind of observation was first articulated by Galileo in his Two New Sciences and was formalised into the science of Allometry during the 20th century.

Why does this matter? Consider the oft-quoted claim that a flea the size of a human being could leap over St Paul’s Cathedral in a single bound. In fact a human sized flea which even attempted to jump would probably collapse into a heap of splintered chitin without ever leaving the ground. This would be a mercy though, since even if it did make the jump the landing would be fatal. Recalling that force is equal to mass multiplied by acceleration (or deceleration in this case) it’s clear that if we scaled up by a factor of ten again then mass will once again scale by volume, i.e. 103=1,000, while the surface area this force is applied to on landing will again only increase by 102=100, leading to a ten times greater force per unit area on impact. Insects fall huge distances unharmed because they simply don’t have enough mass to injure themselves, and similarly the comparatively small size of cats is a large part of the reason why they’re so good at surviving drops. The acrobatic skills certainly help, but even if a tiger had the same ability to land on its feet its greater size would preclude falling the same distance without serious injury.

But if scaling up doesn’t work then how about scaling down? From The Borrowers and Fantastic Voyage to ‘Honey, I Shrunk the Kids’, films have usually preferred this angle anyway. There are only so many things that can be done with a giant character before the army gets sent in, while miniaturisation has more possibilities such as battles with mice, white blood cells and other foes depending on the scale involved. If growing makes you a fragile weakling then surely shrinking will turn you into a veritable superbeing?

Sadly this isn’t the case as bone strength isn’t the only factor. All but the smallest organisms depend on networks of pipes to transport important things around its body, whether those are blood vessels or the xylems and phloems in plants. Intuitively we might assume that flow through these tubes will scale with their cross-sectional area again, so the nutrient supply per volume will actually increase at smaller sizes. Sadly this is one area where intuition fails miserably: flow through a pressured biological vessel (and indeed most pipes) does not scale according to (radius)2 , i.e. area, but by (radius)4!

The formal proof of this is difficult, but boils down to the velocity itself scaling by the square of the radius across the profile of the pipe, flowing fastest in the centre where it is least subject to the frictional drag of the tube’s surface. If we scaled something down by a factor of ten then the demand for nutrients, oxygen etc. would presumably be only 10-3=0.001 of what it was (scaling with the organism’s volume). However, the supply of these things would be 10-4=0.0001, so if supply precisely matched demand before then only 10% of demand will be met after shrinking.

The reasoning above is oversimplified – I assume blood pressure will remain constant for instance – but illustrates the importance of scale again. In reality blood pressure does remain fairly constant across most organisms but this is achieved by smaller hearts beating faster to compensate for their lack of size. Another complicating factors would be the size of red blood cells (of the order 10-6m in all vertebrates) implying a minimum possible diameter to blood vessels: capillaries which are now only large enough for cells to pass through single file would become completely impassable if scaled down further. If a film wanted to treat miniaturisation realistically then any substantial reduction in size should be accompanied by rapid onset of hypoxia, unconsciousness and death (whether this would have improved certain of the movies mentioned earlier is open for debate). Clearly neither growing nor shrinking is a good idea without modifying the organism’s structure in the process.

So far the examples have all been relatively large (at least by biological standards) but what is life like at the smallest scales for single celled organisms and the like? From the discussion of blood vessels it seems that any system of tubes will quickly become inefficient as their radii shrink: even were such a system possible inside a cell it wouldn’t be much use. On the other hand some strategies which would be useless on a distance measured in centimetres, let alone metres, become feasible at the micrometer scale.

Undirected diffusion, driven by random thermal fluctuations, accounts for a substantial chunk of transport within a cell and once again is constrained by scaling: the time it takes to diffuse a given distance is inversely proportional to the square of the distance (so it takes four times longer to diffuse twice as far, nine times longer to diffuse three times as far etc.) neatly establishing a limit to its effectiveness. There are also structures which become possible as small scales, notably the use of motor proteins to walk along the cytoskeleton carrying cargo and even rotary motors for cell movement.

The insight underlying all these slightly eclectic examples is that size matters! The scale of a biological structure cannot be divorced from its evolution and adaptation to a particular function. The style of reasoning also demonstrates the value of applying quantitative thinking to biology, even in such an imprecise and messy way.