The Gulf of Mexico Oil Spill: Another Blow to the World’s Hidden Ecosystem 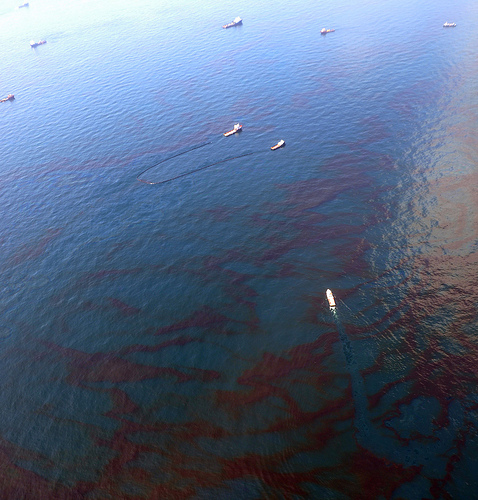 On the 23rd of September, the first independent, peer-reviewed paper on the size of the Gulf of Mexico oil leak was published in Science. It concluded that some 4.4 million (± 20%) barrels of oil escaped into the ocean, and that is after taking into account the 804,877 barrels that BP collected at the site. That equates to 127,965 cubic metres of oil that has been pumped straight into the sea. Far from being an isolated case, this is the very latest in a long line of devastation that – in the disproportionally brief period of our existence – we have subjected the oceans to.

We’ve all seen the pictures of the poor birds struggling to breathe and flap their wings upon the shore. In a more long-term stance, think of how it will affect population numbers of fish, marine mammals, plankton, algae and all those other vital organisms that never reach the headlines. However insignificant we may deem an organism to be, we know that its existence is not isolated. It depends on other species, and other species depend upon it. Damaging the numbers of any one species could create unpredicted and potentially unimaginable ripples through the entire food web.

This devastation may well, of course, go unreported, because we have a habit of ignoring the way in which we abuse the oceans for all they’re worth. It really does seem that because the carcasses are well beyond our horizon or beneath the waves, we do not see it as a problem. We have a history of this.

It is thought about 75 million sharks are killed each year, although this number could be much larger due to lucrative illegal businesses (to put that into context, the entire British human population is only 61 million). For example the (primarily Asian) delicacy of shark-fin soup – as well as the irrational belief that its meat has healing powers – has led to the plummeting of shark populations worldwide. There has been a 90% decrease in shark numbers since 1970. What happens as a consequence? The sharks’ prey numbers escalate enormously, and in turn their prey collapse. The whole ecosystem is subject to disruption. Those species which do rise in numbers will eventually endure huge problems due to excess competition and inadequate resources.

Our methods of fishing are far from ideal. We cast kilometre-wide nets – by their thousands – into the ocean, weighted by heavy balls of metal. The nets sweep up everything in their path, regardless of what it is. The carcasses of turtles, sharks, dolphins and undesired fish are thrown over the side as bycatch. Simultaneously, the weights at the bottom of the net scrape along the ocean floor, ripping up whatever happens to be down there. Why does this go on? Because this is the form of fishing which produces the greatest return, and hence the largest profit.

Remember that these organisms have lived in a delicate balance without us for millions of years. It is – to say the least – naïve to think we can get away with ruining these ancient systems without suffering the consequences. Why do we let it continue? I can think of no other reason but that the trail of destruction immediately sinks. It is out of sight, and so apparently, out of mind. Would such actions be tolerated if they were on land?

It is estimated that between 70 and 80 per cent of the atmospheric oxygen comes from marine plants. As we have established, disrupting ocean food webs could cause this number to fall dramatically. Therefore, we have a selfish reason to preserve the oceans, as well as a moral one. The statement that we’ll not have any fish to eat in future is one that is almost too blatant to point out. The rises in ocean temperature, acidity and the tremendous pollution we are pouring into it are merely afterthoughts, despite the horrendous potential each has for ruining our seas.

We depend upon the oceans for our lives. I don’t know why people overlook such a major issue. Possibly because data are difficult to obtain for an accurate picture to be formed (as Professor John Shepherd said, “Counting fish is like counting trees, except they are invisible and they keep moving”)? Perhaps people still cling onto the idea that the world is here for us to harvest and exploit? Maybe due to scientific illiteracy and governments not appreciating how vital a role they play? Or because the damage is out of sight? I suspect the reality is a combination of each of these poisonous explanations.

How can we, as humans, look at ourselves and not be ashamed of what we are doing? Everybody seems solely concerned about profits in the here and now. Every country thinks about itself. Every leader thinks about his brief period of power. But as Carl Sagan, the great astrophysicist and science populariser, said, “Who speaks for Earth?”

A version of this article was first published on Tom Walker’s blog.