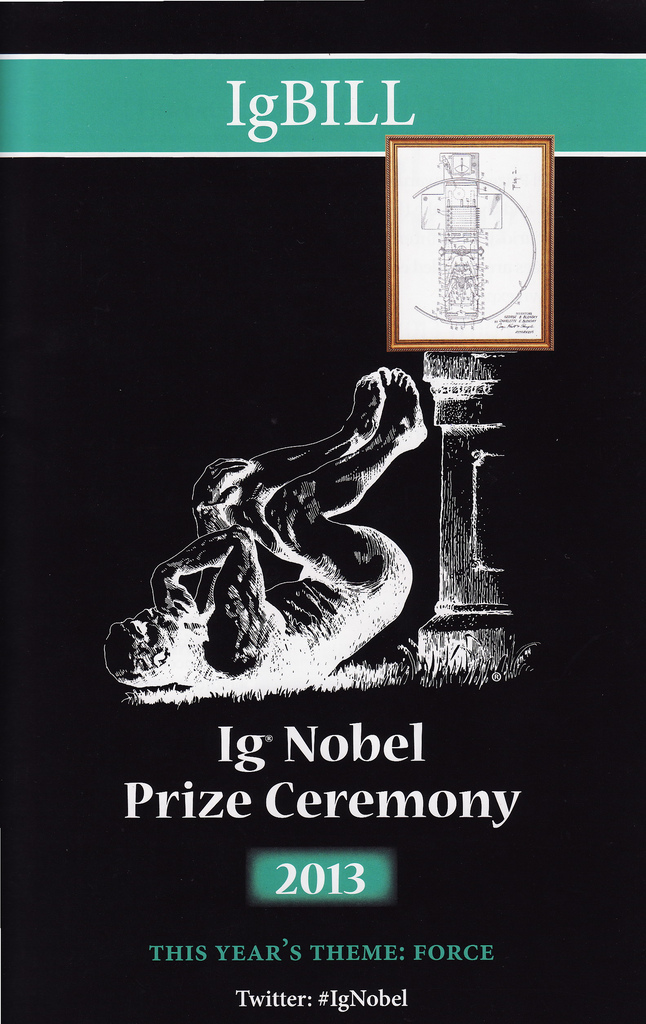 The Ig Nobel prize-winners: making us laugh and then making us think

The previous instalment of the Ig Nobel prize winners 2013 saw scientists eating shrews, running on water and putting hats on beetles. The roundup continues with unorthodox approaches to research on the effects of alcohol, cow diseases and rather delicate surgery – all with a deeper meaning, of course (except perhaps the Peace prize).

Anecdotal and experimental evidence alike observe that members of the opposite sex appear more attractive after a few drinks, but it seems that Beer Goggles can also apply to self-perceptions. Indeed, experiment one of this study showed that self-perceived attractiveness positively correlated with blood alcohol level, as measured with a breathalyser.

However, as causality cannot be inferred from correlations, the alternative possibility that people who think they are attractive are prone to drinking more alcohol could not be ruled out. Also, other research has suggested that drunkenness is not just a physiological consequence of drinking alcohol, but also involves a person’s expectancies of alcohol consumption, which are possibly affected by social learning. Thus, consuming alcohol may not be necessary to alter self-perceived attractiveness.

With these issues in mind, the researchers conducted a balanced placebo experiment, in which an alcoholic drink was given to one group of participants and a non-alcoholic drink to a second. Within these groups, half were told that their drink was alcoholic, and half were told it was non-alcoholic. Participants then delivered a speech and rated how attractive, original and funny they thought they were. Those who believed they had consumed alcohol, regardless of whether they had, were significantly more flattering in their self-perceptions, but independent ratings of the speeches showed that this enhancement was unrelated to actual performance.

The Peace prize this year goes to the President of Belarus, Alexander Lukashenko, for making it illegal to applaud in public, after which the Belarus State Police arrested a one-armed man for clapping.

There was a reason behind this unorthodox law, however. In 2011, dissatisfaction with the government was widespread, but public meetings and demonstrations were prohibited. As a solution, groups of students began to hold flashmobs, in which they would begin clapping as a sign of protest – hence the banning of clapping.

This is a pretty sobering reason for getting an Ig Nobel, but it is just as thought-provoking as it is contentious. Arguably, the most interesting aspect here is the enigma of a one-armed man clapping…

An anti-hijacking system for aircraft

The late Gustano Pizzo received this year’s safety engineering Ig Nobel for his anti-hijacking system, patented in 1972. It is basically an ejector seat for aircraft: once the crew lure the hijacker into the service area of the plane, the floor of this area gives way, dropping the hijacker into a capsule in the belly of the plane. This capsule is then released through bomb bay doors on the underside of the plane, at which point, the parachute attached to the capsule is designed to open, activated by the hijacker’s weight. It is assumed that the police will have been informed and will be tracking the movements of this plummeting criminal.

The trapdoor in the service area was later divided into two sections to improve the likelihood of the crew getting the hijacker in position. Perhaps the system could be installed in various different areas, to keep hijackers on their toes!

Whilst observing cows’ lying behaviour might be an erratic way of predicting the weather, it may be useful to farmers for early detection of diseases or improving welfare. Cows are prey animals: if they appear injured, they are an easy target, so they will walk without limping for as long as possible, giving in only when they are beyond help. Thus, if a farmer can discern when a cow’s lying behaviour is abnormal, the appropriate treatment, whether for lameness or a disease that may be passed on to other cows, can be sought more quickly and possibly be more effective.

Previous research in this field typically denied cows the option of lying down, and found that once released, cows who had been standing for longer (around 5 hours) were more likely to lie down. However, this method is quite artificial, so the present researchers took a different approach. They used movement sensors and cameras to record the positions of 73 cows in naturalistic settings, collecting data on the duration of 59,308 lying episodes. From this, it was calculated that the likelihood of a cow lying down within the next 15 minutes did not significantly increase with the time it had spent standing up. In other words, cows are pretty good at standing up for the long haul.

However, it was just as important to look at the reverse: whether the probability of a cow standing up could be estimated. Cows can’t graze from a lying position, and what with having four stomachs, they need to eat quite often. This means it is logical that the probability of a cow standing up within the next 15 minutes should increase with the time the cow has spent lying down, and that is exactly what the researchers found.

So, to be vigilant for ill cows, farmers should look not for a cow that lies down often, but for one that doesn’t stand up often. It’s a subtle but significant difference.

Reattachment of a severed penis is possible, unless it has been partially eaten by a duck

The most gruesome prize was certainly saved until last, and although it sounds quite humorous, it has some very useful implications, and arose (excuse the pun) from a pretty grim problem. In the 1970’s, following the example of several high-profile women, Thailand was struck by an epidemic of revenge: Thai women began chopping off the penises of their philandering husbands. Obviously, in such an event, a reliable and effective procedure for their reattachment was needed, and the sheer amount of muscles and blood vessels involved made this a difficult prospect.

The surgical procedures of 18 cases of penis severing were described in the present research, from which the best techniques (depending on how much had been chopped) could be seen. One option was to use the foreskin for grafts to cover the reattached veins. In more severe cases, where the penis had been severed right at the base, a ‘burrowing’ technique had to be used. The penis had to be embedded in the scrotum, meaning it had no sexual function whatsoever. After healing, another operation could be performed in which the penis was brought back out with scrotum grafts. The penis could now get a partial erection, and whilst several men reported numbness to touch, they reasoned that this had its compensations as they could last longer.

Despite the initial trauma for the victims, the researchers were rightly optimistic about the prognosis, as infections had been minimised and some sexual function regained. Accidents do happen, and so it is useful to know the best way to deal with such incidents, but this research could also be very valuable to surgery on transgender individuals.

If you’re wondering where the ducks come in, they often settle underneath the houses, which are typically raised. On several occasions, the severed penis was tossed out of window, ‘captured’ and ravaged by resident ducks – in which case, there was very little that could be done.

So, that concludes the 2013 Ig Nobel Prizes. Hopefully, the Annals of Improbable Research will continue to inspire wacky, thought-provoking research and fuel passion for and interest in science. What the 2014 prize ceremony holds remains to be seen, but the winning research is probably out there, waiting for someone to recognise its wider meaning.