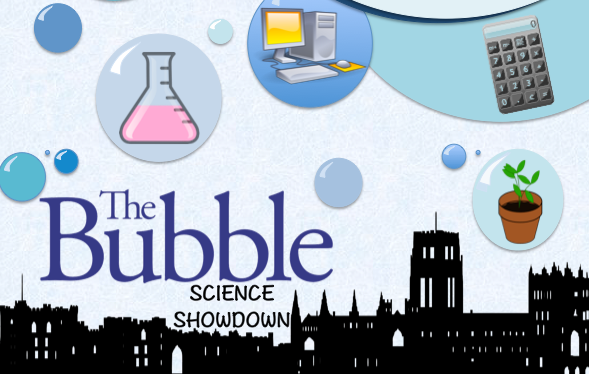 The chemistry entries from the science writing competition.

Why Chemistry is simply the best.

Chemistry: it’s the ultimate science subject. When you think of science, you think of a nutty professor cackling and holding a foaming beaker. Well, that nutty professor is me, and my daily lectures beat yours hands down; who wants to learn how to make crystal meth? How an MRI scanner works? What makes jars of coffee smell like coffee (surprise! It’s not the coffee! It’s a chemical in the jar lid that smells like coffee!) Chemistry is quite frankly the coolest subject on the planet.

I love chemistry so much that I want to shout it from the rooftops; in fact, the last three years of my degree have driven me barmy enough that this isn’t even an exaggeration. Chemistry is a subject of total extremes; the course content is so detailed and extensive that most weeks your average chemistry student can be found hunched over a pile of summatives, muttering about curly arrows and consuming unhealthy quantities of caffeine.

So is chemistry worth the struggle? Absolutely! From my experience, chemistry gives its students an almost complete working knowledge of the universe, from the very beginning of the Big Bang and formation of elements, to quantum mechanics, electromagnetism, biochemical reactions, and most importantly advanced chemical synthesis.

The absolute best part of a chemistry degree is undoubtedly the laboratory courses. Although these are some of the most stressful aspects of our degree, it’s what every chemist lives for. The satisfaction of finishing an experiment and holding a vial filled with a chemical that you made is probably one of the best feelings in the world. While my college friends were lying around in hungover heaps in first year, I was in the lab making aspirin (oddly appropriate considering how I was also hungover at the time). I’ve now progressed to making much more complex molecules, most of which are used in drug synthesis; this should set me up nicely for a high paid graduate job in pharmaceuticals, should I want one.

If you’re really looking for extremes in chemistry, did I mention that I set things on fire occasionally? Not always intentionally, though. On the colder side, my absolute favourite part of chemistry is working with cryogens like liquid nitrogen. You might have sipped a liquid nitrogen cooled cocktail, but have you used it to freeze a banana and then smashed it with a hammer? How about making a fountain of liquid nitrogen rain down on an audience of gobsmacked children at a science fair using nothing but a copper pipe? I have, and it’s awesome. Chemistry is awesome. Accept it. Embrace the madness!

Chemistry and the other sciences – All for one or one for all?

There is a joke among chemists that if you want a Nobel Prize in chemistry, do biology or physics. A quick glance at the work of many Nobel Laureates in chemistry reveals how broadly the subject is viewed. Behind this lies a point: chemistry is not considered an isolated subject. Nor should it be. Contemporary chemical research has done much to forge its way into the grey areas between disciplines. It follows that a factor in gauging the impact of chemical research is its applicability to ‘the bigger picture’ – whether it be towards novel materials, new medicines or improved industrial processes. Indeed, chemistry as a subject has a deep involvement in disciplines across the scientific spectrum. The American Chemical Society goes so far as to claim that “chemistry is central to everything” – they even give away t-shirts adorning that sentiment.

Hyperbole aside, why do chemists like to ply their trade outside of its traditional context? Does this give chemistry any significance above other sciences? At its core, chemistry is the study of the properties and interactions of the matter that surrounds us and so it makes sense that this curiosity extends to other disciplines. How does the composition and interaction of substances in the air, water and ground govern our environment, and what impact do we have on it? What molecular interactions are responsible for the biological processes that dictate our behaviour? Can we model the energetics of a chemical reaction to successfully predict what products will be formed? These questions are far reaching and one common feature is the involvement of chemical science, but does that justify a position as the superior science?

The very nature of cross-disciplinary study requires the meeting of minds from diverse backgrounds. In order to understand ourselves and the world around us it is important to have varied perspectives from experts in different fields. Chemistry (or any other science) cannot claim to be a ‘jack of all trades’ in this respect. The question of which is the better science then seems to be a subjective one. As the boundaries between disciplines continue to blur, not only will it become more difficult to justify one science as superior, it will also be harder to identify where one ends and another begins.