The Science behind Coffee

Having originated in Ethiopia, coffee has become a truly global phenomenon. It is an integral part of our cultures and economies, as it is one of the world’s most valuable natural commodities and is grown in over 70 countries worldwide. Everyone knows exactly how they like their coffee, whether you are a no nonsense Americano kind of person or a skinny, double shot, extra foam pumpkin spice Latte enthusiast. But what is the science behind the humble cup of morning coffee?

The top 20 coffee producing countries lie within the ‘Bean Belt’ highlighted in yellow and spans the southern tropics.

From the Plant to the Bean

The coffee tree is an evergreen shrub that flowers in clusters of white fragrant flowers and produces fruits called ‘drupes’ that don’t split on maturation. There are two main varieties of the coffee tree (or to give it the latin name Rubiaceae Coffea), which are the Arabica and Canephora, also known as Robusta.

Arabica is considered the better tasting variety despite having a lower caffeine content, due to several factors. It is a high altitude species of coffee tree and is less hardy and more vulnerable to diseases, whereas Robusta is grown at lower altitudes and is more hardy and resistant to diseases such as coffee rust. It is widely agreed, however, that coffee plants grown at higher altitudes produce richer and deeper flavoured beans. This is due to the longer maturation period of the coffee plant at high altitude and colder conditions, thus allowing the formation of complex sugars in the fruits that give the richer flavour.

Different features of the two varieties of coffee plants also determine their flavour and value as a crop. As Robusta grows at lower altitudes, it is thought to be more bitter (and higher in caffeine content) as a natural insecticide. This bitterness, combined with the presence of natural antioxidants chlorogenic acids, can produce an odd flavour of the coffee bean. Arabica may be less bitter because it does not need to protect itself from insects at high altitudes. As a crop, Arabica plants are more stable as a population because they have two sets of chromosomes and therefore can self-pollinate. In contrast, Robusta has to rely on pollination by wind or insects so is more likely to cross pollinate with other Coffea species. Geneticists have had to collect samples of wild coffee plants in order to stabilise the genetic future of the cultivated varieties of coffee plants in case of the development of new diseases, so your supply of coffee should be safe for the future! 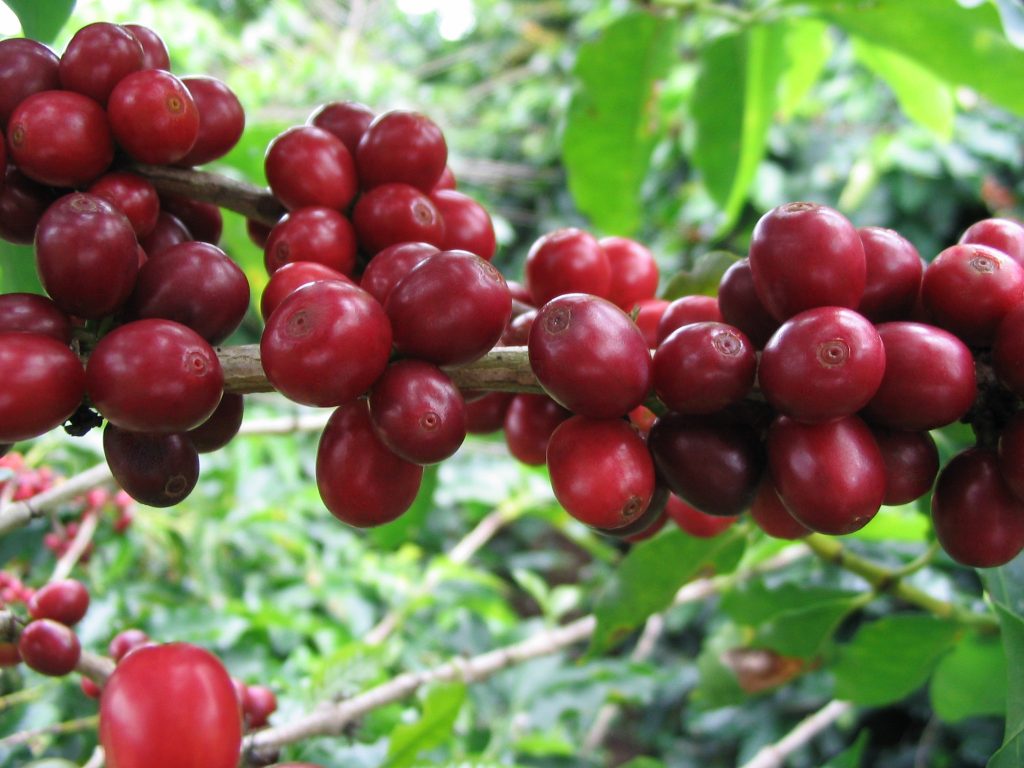 Red Catucaí Coffee fruits, a variety of Arabica Coffee, ripening on the tree.

Much of the flavour of coffee comes from specific parts of the seed and the fullness of flavour depends on how long the seed retains these layers during production. The outer section of the seed is the spermoderm and is the thick skin that protects the endosperm layer, which is the part of the seed that contains most of the flavour. The presence of polysaccharides, chlorogenic acids, lipids and caffeine in the endosperm layer is what imparts flavour to the seed. What we think of as the actual coffee bean is the inner embryo of the seed.

The Chemistry of Roasting

The chemical complexity of coffee beans mainly derives from the all-important roasting process, in which the number of aromatic molecular compounds more than triples. At high temperatures, the green coffee beans begin to lose their colour and undergo a process called the Maillard Reaction. The first stage of the reaction occurs at 200˚C, when the bean expands in size but loses 5% of its weight. This is when the bean starts to caramelise and turns a light brown colour in a light roast. As the temperature increases to 205-220˚C, the bean continues to lose weight due to moisture loss. At about 225˚C, the cell walls in the bean begin to break down and release coffee oils at a medium to dark brown roast. If the roasting process goes beyond this point much of the flavour of the coffee can be lost and would produce an ashy flavour without any of the usual coffee nuances.

So what is it in a coffee mug that gives us that much needed pick-me-up on an all-nighter? Everyone knows that coffee contains the chemical caffeine and that it is a mild stimulant. One of the reasons why caffeine acts as a stimulant is its similarity to the biochemical compound adenosine. During the day, your brain is firing neurons whilst thinking and completing tasks and the firing of neurons produces adenosine. When the levels of adenosine get too high, for example after writing a difficult essay for several hours, the brain detects the high levels and dials down brain activity which makes you feel sleepy (or cranky). Caffeine has a very similar structure to adenosine in that they both have two nitrogen-containing rings in their molecular structure. The caffeine can therefore bind to the adenosine receptors in the brain to prevent the receptors from detecting high levels of adenosine and keep you alert, even if your adenosine levels are high.

The molecular structure of caffeine (left) and adenosine (right).

Caffeine also encourages the production of adrenaline and increases both heart rate and breathing rate which results in a short burst of extra energy. The levels of neurotransmitters including dopamine, serotonin and acetylcholine are increased which generally leads to positive mood changes. A low level consumption of coffee has been linked to a decreased risk of diabetes, cancer and heart risk along with an increased metabolic rate and muscle strength. It is also interesting to note that caffeine is actually considered non-addictive because it does not activate the reward circuits in the brain. If your consumption is greater than 5 cups a day however, you can develop a mild physical dependence but by gradually cutting back on your consumption, any withdrawal symptoms can be avoided. Going cold turkey, coffee lovers, is not the answer!