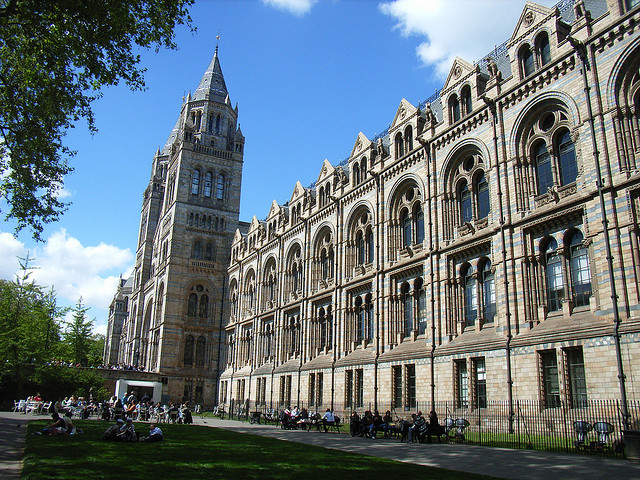 Founded in 1881, the Natural History Museum exhibits fossils of many extinct creatures but a century earlier the very idea of extinction was controversial

The idea of using literature to study the history of science seems a deeply suspicious one: why would you look for science in an old novel or pamphlet rather than going directly to the scientific books and research papers themselves? Of course the latter is important, but there are several reasons why a more literary approach can also be interesting and rewarding in its own right.

The most obvious motivation is that science texts often make for dry and difficult reading! Moreover, they often bear little resemblance to the public perception of science. Mention Quantum Mechanics to most people and the first thing they’ll think of will be Schrödinger’s Cat, but the ambiguously animate animal’s presence in textbooks is negligible compared to its popular impact. Conversely, it’s hard to think of any field more fundamental to modern life than Electromagnetism, yet Maxwell and his equations are largely unknown. Science books alone are therefore limited in the insight they can give us into the intellectual milieu of another era.

By contrast, literature and other popular writings can provide a guide to the sometimes familiar, sometimes alien world of yesteryear. It is a gateway to science as understood by intelligent bystanders rather than dedicated researchers. I’ve chosen two famous but very different examples from the early nineteenth century: the first an influential religious apologetic from the dawn of the century, the second an epic sea story from its middle-years.

If the title of William Paley’s Natural Theology (1802) doesn’t ring a bell then its opening lines are likely to:

“In crossing a heath, suppose I pitched my foot against a stone, and were asked how the stone came to be there; I might possibly answer… [that] it had lain there forever… But suppose I had found a watch upon the ground, and it should be inquired how the watch happened to be in that place; I should hardly think of the answer I had before given… [T]he inference, we think, is inevitable, that the watch must have had a maker…”

The book remains a classic statement of the Teleological Argument and popularised the oft-used analogy of God as ‘divine watchmaker’ to the English-speaking world. It may seem incongruous to use religious tracts to examine past science, but the genre of natural theology was a major vehicle for the popular dissemination of scientific ideas and discoveries in Britain. Purely scientific discourses appealed to a much smaller audience than those which set out an integrated picture of science and its (perceived) implications for humanity’s nature and place in the cosmos. This arguably remains true today, and is one reason for the popularity of writers like Carl Sagan and Richard Dawkins.

Moreover, Paley’s work illustrates why it is anachronistic to talk of 18th Century science and religion as strictly demarcated categories. Like most of his contemporaries, Paley believed in a Scala Naturae, or Great Chain of Being: it was thought that everything in the world had been created in an ascending scale of perfection with rocks and minerals at the bottom, followed by plants, then animals, with humans outranked only by angels and God Himself. As a corollary to this, divine perfection was taken to imply that every niche was filled, every possibility instantiated and every species that could exist must.

One consequence was an assumption that our planetary neighbours must all be inhabited. Belief in extraterrestrials is often mistaken for a very modern affection, but the 18th Century universe was bursting with life. Another consequence was a deep scepticism towards the possibility of extinctions, especially human induced ones, which would represent breaks in the Chain. Although Paley showed some concern for other species suffering in the face of man’s expansion there is no suggestion that they risked wholesale destruction, suggesting instead that “not a single species… has been lost since the creation”.

This optimistic assessment was soon to be shattered. Herman Melville’s Moby Dick (1851) was written half a century later and even cites Paley, along with many writers ancient and modern, in a long list of quotes on whales. Despite its gripping exploration obsession’s perils and the layers of symbolism and allegory this is still very much a book about whales. Melville drew on his experiences aboard a whaling ship and the narrative is interspersed with asides on cetology.

Chapter 105 best illustrates the major shift that had taken place since Paley’s work was published, discussing whether whales have decreased in size and whether whaling threatens them with extinction. Geology was notable in its absence from Natural Theology. By the time Melville was writing – just seven years before Darwin was to publish his Origin of Species – educated people were coming to terms with the Earth having a history of its own far predating that of mankind. Closely linked to this antiquity was a growing understanding of the fossil record and countless creatures whose bones had lain dead long before the first civilisations formed. Nearer to home, the full extent of the devastation wreaked by industrialised slaughter on the once endless herds of bison whose passing shook the American prairies had become clear.

Melville could thus appeal to both classical authors and fossilised, “pre-adamite” specimens in discussing the size of whales. Similarly, the apparently mortal blow dealt to the bison is central to his considerations of whether whaling would eventually take the same toll on the cetaceans. He believed though that whales had one vital advantage over the ill-fated bison:

“they have two firm fortresses, which, in all human probability, will for ever remain impregnable. And as upon the invasion of their valleys, the frosty Swiss have retreated to their mountains; so… the whale-bone whales can at last resort to their Polar citadels… and in a charmed circle of everlasting December, bid defiance to all pursuit from man.”

It’s hard not to be struck by these words today when whaling has driven their populations to critical levels and the effects of climate change include shrinking ice sheets. Perhaps 19th Century readers, with equally clear hindsight, found their predecessors’ confidence in the imperviousness of the natural world to human meddling equally naive.

The second instalment of this article will explore how the fiction of Jules Verne and H.G. Wells was influenced by the science of the later nineteenth century.