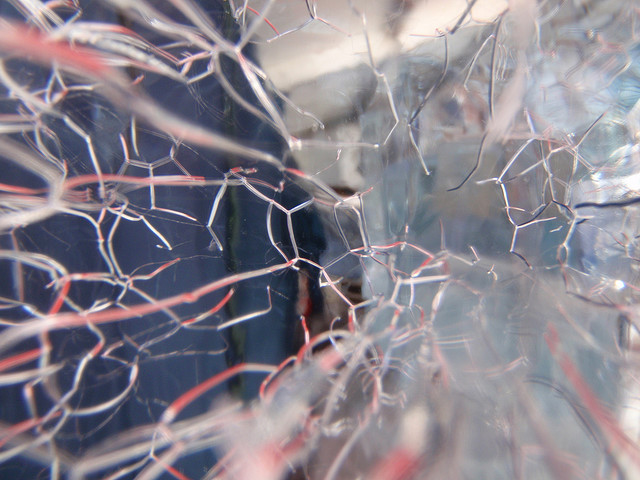 Are there ‘cracks’ in the fabric of the Universe?

When water freezes, defects and “cracks” form, fault lines in the structure of the ice. These are loosely analogously to a far grander phenomenon: cosmic strings. Modern cosmological models predict the formation of these strings in the early stages of the Universe as it transitioned from a highly hot and dense initial state. Extremely long, but so slim that they’re essentially one-dimensional, cosmic strings have extremely interesting properties, including a tendency to form loops which give off distinctive gravitational signals. Sarah Chadburn is a first year PhD candidate in the Department of Mathematics (now second year at time of publication), and her presentation focused on whether these cosmic strings could be used to provide evidence for additional dimensions.

Extra dimensions are a prediction of String Theory, a modern attempt to unify Quantum Mechanics and General Relativity under a general framework. Independently the two models provide astonishing accurate predictions on very small and very large scales respectively. Problems arise, however, when physicists are obliged to appeal to both when dealing with phenomena which are both extremely small and extremely massive such as black holes or the Big Bang: normally sensible equations return nonsensical answers. String Theory is a popular candidate to resolve this problem, but has been criticised in the past due to the difficulties associated with testing it and some of its predictions – including extra dimensions – experimentally.

One proposed reason why we can’t see the extra dimensions it requires is that they’re so compact as to be virtually unobservable, just as a stretch of slim piping can appear one-dimensional from a sufficient distance. They may be too small to detect directly, but cosmic strings offer an alternative approach. The strings are so thin that they could move in these extra dimensions as well as in the three we perceived. Combined with the gravitation signals emitted by loops in the string, scientists could work out how many dimensions a string was moving through based on the details of the events they detect (consider, by analogy, shadows projected on a wall by figures moving in three-dimensions, or the way in which two-dimensional creatures experience the coming of a sphere in Edwin Abbott’s classic book ).

These ideas are pushing the frontiers of scientific knowledge: cosmic strings have yet to be detected, although the detectors at the Laser Interferometer Gravitational-Wave Observatory (LIGO for short) in America are expected to be capable of doing so. Sarah enjoys her research, which follows on from her undergraduate studies at Durham, but says she may pursue something with more practical applications in the future. We wish her all the best.