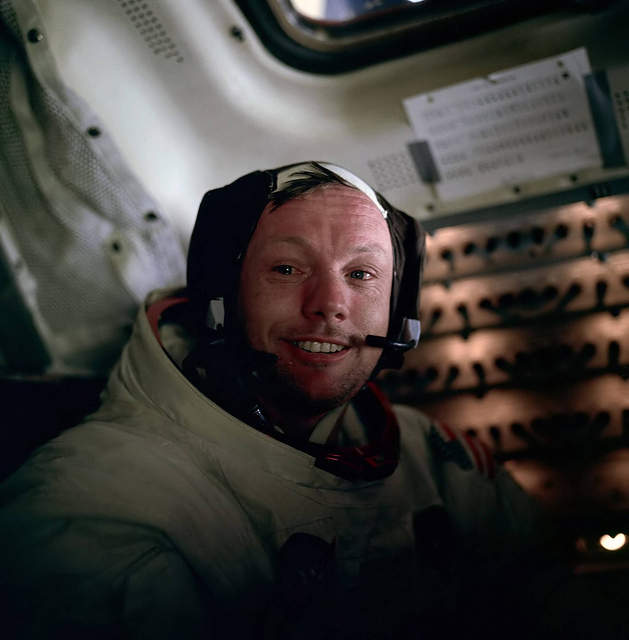 Neil Armstrong shortly after setting foot on the Moon.

When we look at global plans for space exploration in the near future, it is a sad but likely truth that we will soon be living in a world where the number of humans who have set foot on an extraterrestrial body reaches zero. The heyday of manned lunar exploration has long passed, and the numbers of explorers are slowly following. I always knew in the back of my mind that the day would come when I would turn on the TV to the news of the passing of Neil Armstrong – a hero to so many aspiring scientists, pilots, explorers, engineers and modern-day astronauts. Now that this day has arrived and passed, I feel that it would be fitting to take a look back at his life – a life which he preferred to keep away from the prying eyes of the press and public.

Even when we look as far back as Neil’s teenage years, it is easy to see that he had one particular passion: aviation. He became a qualified pilot at the age of 16, before he even had a driving licence. He chose to study aeronautical engineering at university. He was flying military sorties as a Navy pilot long before he started his career as a test pilot, which eventually led him to join the NASA astronaut corps. If there is one thing Neil wanted to spend his life doing, it was flying.

It takes a special sort of person to command humanity’s first mission to the Moon. It would have been a costly mistake for NASA to make the wrong choice. For Apollo 11 to be a success, it had to be commandeered by someone who was prepared both emotionally and physically to fling him/herself hundreds of thousands of miles away from home with the intention of taking the first steps into a place where the temperature difference between sunlight and shadow can be as much as 250°C, and where the entire human population can be hidden behind a single thumb. There were a number of events and accomplishments during Neil’s life which came together to ensure that he was the one to climb down the ladder, stand on the lunar surface, and say the immortal words: “That’s one small step for a man, one giant leap for mankind”.

Before Neil was able to finish his studies at university, he was called up for military service. He reported to the Pensacola Navy Base for military flight training, and 18 months later, he boarded an aircraft carrier bound for Korea, where he eventually served as a pilot in the VF-51 all-jet squadron. This was a far cry from his first childhood flight in a 1920’s Ford Tri-motor transport aircraft at the age of five. It wasn’t long after his first flight in a jet aircraft when Neil was put into a situation where he had to demonstrate his flying ability first-hand. During a risky bombing run, his aircraft came under heavy fire from the ground. As he was struggling to escape from the sudden attack, the wing of his plane collided with a structure on the ground causing severe damage, which eventually saw him ejecting over foreign territory. If it weren’t for his quick wits and raw flying ability in this situation, he may not have survived to complete his 78 more successful missions as a Navy pilot.

Despite Neil’s success as a Naval aviator, he didn’t see himself spending all his life in the active military. In 1952, he enrolled in the Naval Reserve where he stayed for a number of years. During this time, he finished his studies and graduated with a bachelor’s degree in aeronautical engineering. It wasn’t long after graduation that another job caught his eye – a job more dangerous (and, in his eyes, thrilling) than that of a Navy pilot. He became a test pilot – one of the most unpredictable and risky occupations available. He would be exchanging his regular sorties and his tried-and-tested combat aircraft for the opportunity to be the one of the first people to experience what was the cutting edge of 1950s aircraft technology. It is hardly surprising that his flights didn’t always go smoothly. During his time as a test pilot, he was forced to land a heavy-lift transport aircraft with only one propeller running, and he even ended up landing an experimental jet on a dry lake bed, only to have the wheels sink into the mud, causing him and his co-pilot to have to wait to be rescued.

When he signed up to be a test pilot, he most likely expected to take such incidents in his stride. He never let these negative outcomes deter his vision, and he was rewarded greatly for his dedication when he was chosen to experience what was possibly the most thrilling ride a pilot could experience (short of going into space, of course!): the X-15. Little more than a rocket with wings, the X-15 was an experimental supersonic aircraft capable of flying right on the tenuous edge of the atmosphere. During his seven X-15 flights, he experienced altitudes of over 200,000 feet (nearly seven times higher than a modern airliner’s service ceiling) and he found himself cruising over much of the USA’s west coast at altitudes where the air is barely thick enough to allow control over an aircraft.

When he eventually came to apply for a seat on a spaceflight, it is hardly surprising that NASA saw potential in his flying experience. His first spaceflight took place prior to the Apollo program, in the ‘Gemini’ era, when NASA was rapidly testing and evaluating new technologies in order to gain the knowledge required to meet President Kennedy’s bold promise to ‘put a man on the Moon before the decade is out’. Neil was assigned as the commander of ‘Gemini 8’ – a mission whose prime goal was to perform an orbital rendezvous with an unmanned target vehicle. Without the ability to execute a perfect meet-up between two separate space vehicles, a safe return from the Moon would have been near enough impossible. The small two-man Gemini 8 capsule left Earth in the late afternoon of the 16th March 1966, with a planned duration of 3 days. It was only a matter of hours before Neil and his crewmate, David Scott, sighted the elongated body of the target spacecraft in its 300km parking orbit. A perfect approach, alignment and docking commenced, with a hard connection being made just over four hours into the mission.

However, the two-man Gemini 8 crew soon received a hard-hitting reminder that experimental space travel is never routine. After their successful docking, the target vehicle’s autopilot program came into effect, causing the docked complex to perform a simple ninety-degree rotation. Soon after the manoeuvre began, Armstrong and Scott noticed that their spacecraft was also entering an unplanned roll, at a steadily increasing speed. They responded by deactivating the target vehicle’s autopilot, but the problem persisted, with Gemini 8 now entering an alarmingly fast spin. The crew noticed that the spacecraft’s supply of RCS fuel – a fuel reserve used to operate the orientation thrusters – was rapidly depleting. This led Armstrong and Scott to the realisation that the problem was with their own capsule rather than the target vehicle.

At this point, Gemini 8’s thruster malfunction had accelerated its roll to almost 360 degrees per second, and the crew was approaching loss of consciousness due to violent spinning. Had Neil’s knowledge of his spacecraft been lesser, and had a lesser pilot than himself been in command, it was entirely possible that the mission could have ended horribly. However, he was once again able to use his pilot’s intuition to his advantage. He activated a second set of thrusters, usually reserved for re-entry only, and used them to manually oppose Gemini 8’s errant rotation. Using nothing more than stick-and-rudder manual flying, Neil was able to damp Gemini 8’s rotation enough to set the spacecraft up for an emergency return to Earth. The mission had to be cut short less than half a day after launch, but there was nothing more valuable for NASA than seeing the two crew members climb safely out of the tiny capsule as it floated among the swells of the Pacific Ocean, where it had successfully splashed down after averting disaster.

When we reflect upon these achievements, which are often left forgotten in the shadow of the Apollo 11 mission itself, it is not so difficult to see why Neil was eventually offered the chance to be the first human to step onto the Moon. He had demonstrated more than once that he was no average pilot. He had shown the world that he was able to fly both aircraft and space capsules under conditions that would cause many other aviators to lose their cool. Calmness was Neil’s trademark, and it was a quality which was certainly not overlooked by his peers at NASA. The fact that he was still alive and well at the time of Apollo 11’s crew selection was testament to his ability to deal with the unexpected.

It is my opinion that, when the Apollo 11 Saturn V lunar rocket launched into the summer sky in July 1969 with Armstrong in the commander’s seat, there was no astronaut more deserving of the chance to be flung out towards humanity’s first target in the ongoing dream to explore new worlds. This point is further proven by his successes during Apollo 11 itself, such as his perfect manual landing of the ‘Eagle’ lunar module on the surface of the Sea of Tranquility, which he was forced to perform at short notice due to navigation and computer issues. There are few people, even in today’s world of constant space habitation and routine long-stay visits to the International Space Station, who could match the accomplishments of the Ohio-born aviation enthusiast whose love for flying saw him fly further than anyone else before him. The world’s governments may not be spending much time looking up at the Moon as they formulate their plans for future space travel, but whenever the full Moon’s glow catches our eyes, we should never forget about the small chain of footprints made in the dust of the Sea of Tranquility by an explorer whose name we will continue to teach for many centuries to come.