Preview: Recovering Connections: Abstract and Analogy in Poetry and Physics 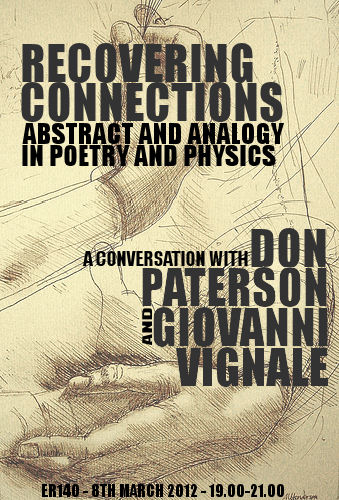 Are the abstractions of poetry and physics really so different?

Recovering Connections is a public seminar on Thursday 8th March, structured as a conversation between poet Don Paterson and theoretical physicist Giovanni Vignale.

Poetry and physics have spent a long time drifting apart as academic disciplines – yet I believe there has always existed an intimate connection. Both in the form of expression but also in the reality which they uncover.

Don Paterson writes in The Lyric Principle how ‘it’s amusing to think that if physics succeeds in its attempts to find some vibrational basis for the universe in the form of string or membrane – i.e. proves that difference itself is merely a manifestation of frequency-rates – it will be consubstantial with the lyric project, that is to say it will show it to be nonsymbolic.’

Though there is a danger that we wander into merely playing with metaphors of metaphors the link is not so tenuous. Giovanni Vignale writes ‘Just as poetry is a special mode of use of language – a “power language”- theoretical physics is a special mode of use of abstract thought (other uses are seen in mathematics and theology). In both disciplines we see formal criteria (phonetic elegance or mathematical elegance) guiding the process of discovery towards memorable formulations, which concisely summarize a large body of experience.’

The dualism with which the arts and sciences are now treated is becoming very pronounced and largely counterproductive. When I proposed this idea to a young physicist (embarrassed to be seen at a poetry reading) he accused (for that is the best word) of being spiritual. There is a growing enmity borne from a lack of understanding of what each discipline does and a fundamentalism emerging from a claim to truth.

This conversation aims to find more concrete and less specious connections; demonstrating both the similarities of the subjects, and the potential of interdisciplinary work. There will be presentations by each speaker followed by an open discussion on the themes raised. But speakers have wrote extensively on the mechanics of their subjects; on the nature of the lyric and the power of the abstract.

Don Paterson teaches poetry at the University of St. Andrews. He has published two books of aphorism and six books of poetry. His latest book, Rain, won the 2009 Forward prize. He is a Fellow of the Royal Society of Literature and a Fellow of the English Association; he received the OBE in 2008 and the Queen’s Gold Medal for Poetry in 2010.

Giovanni Vignale is Curators’ Professor of Physics at the University of Missouri-Columbia. His main areas of research are many-body theory and density functional theory. He is the authors of two books and almost 200 papers.