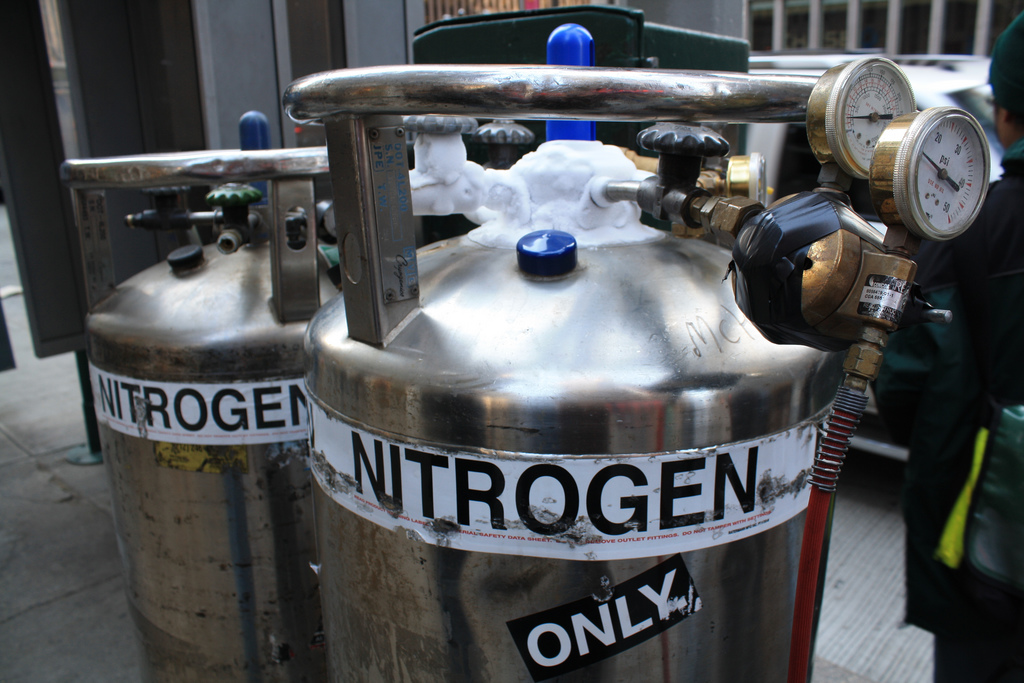 Abundant as a gas, interesting as a liquid

Before end of year exams and holidays got in the way of our quick, brush over tour of the elements, we had stopped at carbon. Looking at the periodic table (or if you’re a chemistry student, hopefully without looking), our next stop is nitrogen.

So let’s start with some of the impressive credentials nitrogen has: it is the most common gas in the Earth’s atmosphere, making up 78%; it is the fourth most abundant element in the body after oxygen, carbon and hydrogen, because of its presence in amino acids (the building blocks of proteins) and nucleic acids (DNA and RNA which determine our genetic makeup); and its role in the nitrogen cycle is crucial for getting nitrogen into living organisms. Now that’s a pretty notable list of qualities that would get nitrogen a good career, I’m sure you’d agree!

Depending on your scientific background, you will know different things about nitrogen. Many will know about liquid nitrogen with its smoky effects, used in many fun demonstrations. Indeed, tiny liquid nitrogen droplets instantly condense in the surrounding air to vapour upon contact, causing the ‘cauldron effect’, which wows audiences. So surely there cannot be a downside to this fun chemical? Well, allow me to introduce liquid nitrogen cocktails. These cocktails use nitrogen purely for the entertainment factor and to keep the alcohol and glass chilled – they are not to be ingested. But along with wild drunken nights out, linked to peer pressure and lowered inhibitions, they could be a cocktail recipe for disaster! I’m sure if you ask chemistry students, they will say that at some point they have gone into the lab with a hangover from the night before, but handling chemicals when under the influence? Borrowing the well known slogan, don’t drink and drive – don’t drink and handle chemicals! There is a case where a person drank such a cocktail without waiting for the smoky vapour to evaporate and then had to have their stomach removed. The moral to this story? Every element has a dangerous side!

Now for harder science jargon! The ‘Leidenfrost effect’ occurs when liquid nitrogen meets a surface which is significantly hotter than liquid nitrogen’s boiling point of -196 ⁰C (which really isn’t a difficult temperature to exceed) producing an insulating layer of vapour which prevents the liquid from boiling speedily away. This is what allows a drop of liquid nitrogen to simply roll off the skin. But if you stick your whole hand in, your hand will freeze, and you will no longer feel attached to it!

With all these warnings aside, if dealt with correctly liquid nitrogen can be used to get some impressive results. Chef Heston Blumenthal has popularised the use of liquid nitrogen in food preparation – it boils away quickly after addition to ice cream mixture, creating ice cream in seconds. What’s more, it creates smaller crystals in the ice cream yielding a highly desired smoother texture. However, Heston made nitro-scrambled eggs and bacon ice cream… I think I’m just going to stick to chocolate ice cream personally!

Finally, as my ‘witty’ jokes are in such high demand (I know you enjoy them really!), here’s this week’s joke to tide you over until the next:

What do you call nitrogen when the sun comes up?