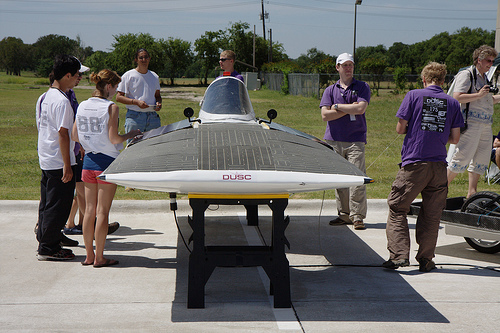 The DUSC team in Dallas, Texas for the North American Solar Challenge

When anyone thinks about pushing the boundaries of science and technology, people may first think of CERN in Switzerland or perhaps the Cavendish Laboratory in Cambridge. But, as I’ve been discovering recently you need not look any further that Durham’s own Engineering Department for the practical application of new and exciting technologies. I am, of course, talking about the Durham University Solar Car.

The team was established in 2004 as a student-led project designed to build a solar powered, one man car. The aim of this car was to promote the use of new and renewable energies, and especially in the transport sector. After only four years in existence the team participated in the North American Solar Challenge in July 2008. This challenge consists of a 2,400-km endurance race from Dallas, Texas to Calgary in Alberta, Canada. The team was the only one from the UK and one of only two from Europe. During the course of the race the car managed speeds of 60 mph and finished 14th out of 25 teams. This result on their first time in the race won them the “Best Rookie Team” award.

The car itself uses solar panel cells as described on their website: “DUSC uses high efficiency silicon solar cells to harness the sun’s energy. The output from these cells is then passed through one of eight maximum power point trackers (MPPTs) which ensure the maximum possible power is extracted from the cells.” The storage capacity of the cells is 4.8 kWh which is equal to lighting eighty 60 watt bulbs for an hour.

What’s interesting about this project is the constant new developments and new additions to the car. This is probably due to the constant supply of fresh engineers to the team and a general desire to continually push the car to new limits not only in terms of speed but also in terms of other developments to the car as a reliable vehicle. For example the latest additions to the car include a new canopy and windscreen, a new trailer, which is almost finished, with a rear view camera and an LCD screen to be fitted soon. Also, in terms of its primary function, work on a new solar array is to begin soon.

The next challenge for the DUSC team was the GreenFleet Arrive ’n’ Drive event for environmentally friendly fleet vehicles this year at Rockingham race track. The car was displayed at the event and then demonstrated on the track. To make it even more interesting the team was pit against Cambridge University’s Eco Racing team. As can be seen here the DUSC team demolished the CUER team’s result (which, let’s be honest, is always a bit of a joy).

Through a mix of new people and new ideas, coupled with successes, the team has gone from strength to strength since its creation in 2004. The future holds some improvements for the car, as well as more challenges. In terms of improvements the car is going to be improved with new batteries and the use of the Engineering Department’s in-house designed controller and in-wheel motor. The next challenge for the team lies in Australia and the Global Green Challenge which is a 3,000-km race from Darwin to Adelaide. I wish them luck! Although, I don’t think they’ll need it.