In light of Lumiere: the science of light and colour

Over the last few days, Durham was home to The UK’s largest light festival, Lumiere, with twenty-eight art installations set up throughout the city: from the Viaduct all the way to the Botanical Gardens. Each piece explored the theme of ‘light’ in a uniquely mesmerising way, but there’s much more to the way we see and interact with light than meets the eye.

For a long time, we were a bit in the dark. Going all the way back to Newton, there has been a source of great debate over whether light can be considered a particle or a wave. Thanks to advances in quantum mechanics, we now know that light has a dual nature: it is both. Light can be reflected and refracted, as well as undergoing interference and showing the Doppler Effect just as any other wave. However, as Einstein theorised, light also carries fixed amounts of electromagnetic energy in individual particles, now known as photons.

In 2015, a group of researchers from the École polytechnique fédérale de Lausanne (EPFL), in Switzerland, managed to produce the first ever photograph of light behaving as a wave and a particle at the same time. By shooting a stream of electrons at a beam of light, they were able to visualise the ‘standing wave’ (essentially a fingerprint left behind from a light wave) and simultaneously observe a change in speed of the electrons, caused by hitting and exchanging energy with photons.

How do we see light?

Back in Ancient Greece, philosophers such as Pythagoras and Plato believed that we could see light by sending out ‘probes’ from our eyes to gather intelligence and report back to the brain. There is, however, a huge flaw in this theory: sometimes it goes dark, so what happens to the intelligence-gathering probes then? Ultimately, it was the Arabic philosopher Alhazen who realised that our eyes must instead collect the light that reaches them.

Within the eye, we have two types of photoreceptors, which are concentrated in the fovea centralis – a 0.3 millimeter wide spot at the back wall of the retina. There are rod cells, which allow us to see monochromatic (white) light, and cone cells, which allow us to see coloured light. Mammals, like us, have three types of cone cells, specialised for red, green and blue light. However, this is not universal; the mantis shrimp, for example, has twelve different types of cone cells. But does this mean they can see colours that we can’t? A 2014 study found that, ultimately, no: each cone cell actually only picks up a very narrow, specific shade of colour, most likely within our own spectrum of visible light.

When light hits photoreceptors, it causes the breakdown of pigments, which triggers a series of reactions and sends a signal to the brain’s visual cortex. Rhodopsin, the pigment in rod cells, can be broken down in much weaker light than iodopsin, in cone cells. This explains why we can’t see colour in the dark, just greyscale. 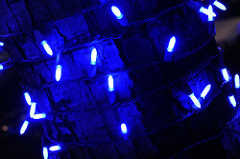 What effect does light have on us?

While we can all agree that Lumiere looked astounding, bright lights can have more of an effect on us than we realise. A literature review by Edwards and Torcellini found that adequate lighting was associated more with feelings of happiness, whereas dim lighting was associated with feelings of depression. This is possibly due to different wavelengths of light generating action potentials at different rates, which affects secretion of hormones.

Studies have also shown the light at the blue end of the spectrum makes us more alert than red light. While this is useful to know if you want improve your focus, exposure to blue light from our electronic devices at night can interfere with our circadian rhythms and lead us to fall asleep later, so consider turning on night mode if you want to make sure you get an early night.

In art and in science, the theme of light has dazzled us for centuries. While some might argue that “explanation kills art”, I think that understanding how it all works and how we can come to appreciate light makes Lumiere all the more beautiful.