Higgs: the Man, the Particle and the Nobel Prize 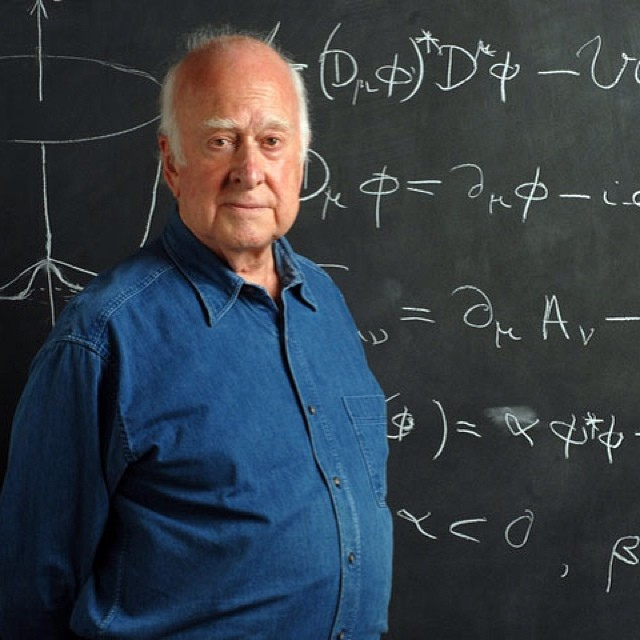 Peter Higgs and some confusing squiggles

In 1962, Philip Warren Anderson proposed a mechanism essential to explain the property of mass in the standard model of particle physics. In 1964, the relativistic version of this model was developed by three groups: Peter Higgs; Robert Brout (deceased) and Francois Englert; and Geral Guralnik, Carl Hagen and Tom Kibble. This mechanism is the Higgs Mechanism, or as Higgs calls it: the ABEGHHK’tH Mechanism [‘t Hooft won the Nobel Prize in 1999 for his work on electroweak interactions].

On 8th October 2013, an announcement was released that the Nobel Prize in Physics is shared by Higgs and Englert for this work. With his recent appearances at Durham in the summer, where he received an honorary degree for his work, and earlier this month, for the Collingwood Lecture, I thought it might be nice to give a quick review of this boy from Newcastle-upon-Tyne.

Born in 1929, which makes him a grand age of 84, Peter Higgs is a fairly local boy, born in Newcastle and mostly home taught due to his family moving about a lot and World War II. When he and his mother finally settled he attended Cotham Grammar School, of which alumni included the rather fantastic Paul Dirac, a founder of quantum mechanics. From secondary school he moved to King’s College London, graduating with a first class honours in Physics and, later, a master’s in physics. He went on to study his PhD, also at KCL, in molecular physics!! Not, as one might expect, deep particle or theoretical physics.

Since finishing his formal education, Higgs has spent most of his time at the University of Edinburgh (although he did spend some time working at other universities). He has since become an Emeritus professor at Edinburgh, a Fellow of the Royal Society and the Institute of Physics. He has been awarded an Honorary Fellowship from Swansea University and the aforementioned honorary Doctor of Science from Durham University. He has of course won many medals and awards for his work in particle physics and for the developing of the theory of the Higgs mechanism.

The ‘Higgs’ Mechanism and the ‘God’ Particle

This isn’t a review of the physics surrounding the Higgs mechanism, so I shan’t go into too much depth, but I will just give a quick background on what the mechanism means and mention a famous analogy by David Miller.

The Higgs mechanism is a theory within the Standard Model framework of particle physics that is used to explain how fundamental particles have mass. Without something like the Higgs mechanism providing mass to certain bosons (W and Z bosons – the fundamental bosons are force carrying particles) but not others (photons, e.g. the electromagnetic force carrier) there would be no you, no me, no planets, no stars, no anything! So finding a working theory to understand this, well let’s just say it’s important.

The Higgs mechanism theorises a universally permeating and invisible field: the Higgs field. So how can we tell if the Higgs field exists?: like air we can’t see it but, unlike air, we also can’t feel it. Well, we may not be able to ‘see’ it directly but we can design experiments to ‘see’ or ‘feel’ the field using sophisticated tools; one such tool is the Large Hadron Collider at CERN. The LHC is able to collide particles together at such speeds that resulting energetic impacts can produce massive particles of varying types. The Higgs particle is just one of these.

But how does knowing there’s a Higgs particle mean we know there’s a field? The Higgs particle was a theoretical construct – described as an excitation within the Higgs field. So if we have found the Higgs, then the Higgs field must exist and even if we hadn’t found a Higgs-like boson, the Higgs field could still exist. Confused yet? Well, in 1993, William Waldegrave, Minister for Science at the time, asked physicists, who were currently asking for the funding to build the LHC, to design a simple analogy that he could understand. The prize was a bottle of vintage champagne for anybody who was able to.

One such analogy, winning said bottle of champagne, was by David Miller. His original was a little different but it goes something like this:

Hopefully that helps clear things up a little. I would like to note that at the Collingwood Lecture on 5th November 2013, Higgs said he didn’t mind the ‘Thatcher Analogy’ (the original used Thatcher and Politicians) but he should like to point out that he dodges around the room to miss the clumps: his velocity stays the same, only his door-to-bar speed changes.

On 4th July 2012, the two CERN experiments, ATLAS and CMS, announced that they had independently discovered a previously unknown boson of the same mass with a less than 1 in 1,000,000 chance of error. The two teams had not been allowed to discuss their results with each other until just before the announcement. This unknown boson was still not confirmed as the Higgs boson, though it was within the predicted range.

As of 14th March 2013, CERN has announced that current tests on the discovered particle have matched fundamental criteria of the Higgs boson; thus evidence is strongly mounting to suggest that this is the Higgs particle and that the Higgs field and mechanism may, therefore, be correct. But there is still far to go: the particle may be almost identical to the theoretical Higgs particle but differ in such ways that may shake the whole foundation of the Standard Model. Discoveries of unexpected attributes to this boson may mean that alternative theories must be looked at and a whole new model may arise; although, at the moment, the standard model looks a safe bet.

Oh, and one final thing: it isn’t the ‘God’ particle. In his introduction to the Collingwood Lecture, Steve Abel used the following line: “it can’t be the ‘God’ particle; we have tangible evidence for it!” In fact, I believe the particle was given the name in a popular science book about Higgs and the LHC. The intended name was the ‘Goddamn’ particle, as it was so difficult to find, or even pin down where it might be, but the editor changed it.

The Nobel Prize and Beyond

So what’s the future for Peter Higgs? He’s won the highest honour known to science (and many other honours as well), so he’ll being talking all over the world till the end of the year, his Nobel Lecture being 8th December 2013. Asked what he liked to do in his spare time, Peter Higgs said that he enjoyed listening to music and going to concerts and reading the pile of books that he has accrued in his lifetime. He also said that despite retiring almost a decade ago, he was hoping to retire again next year: a well-deserved retirement indeed!