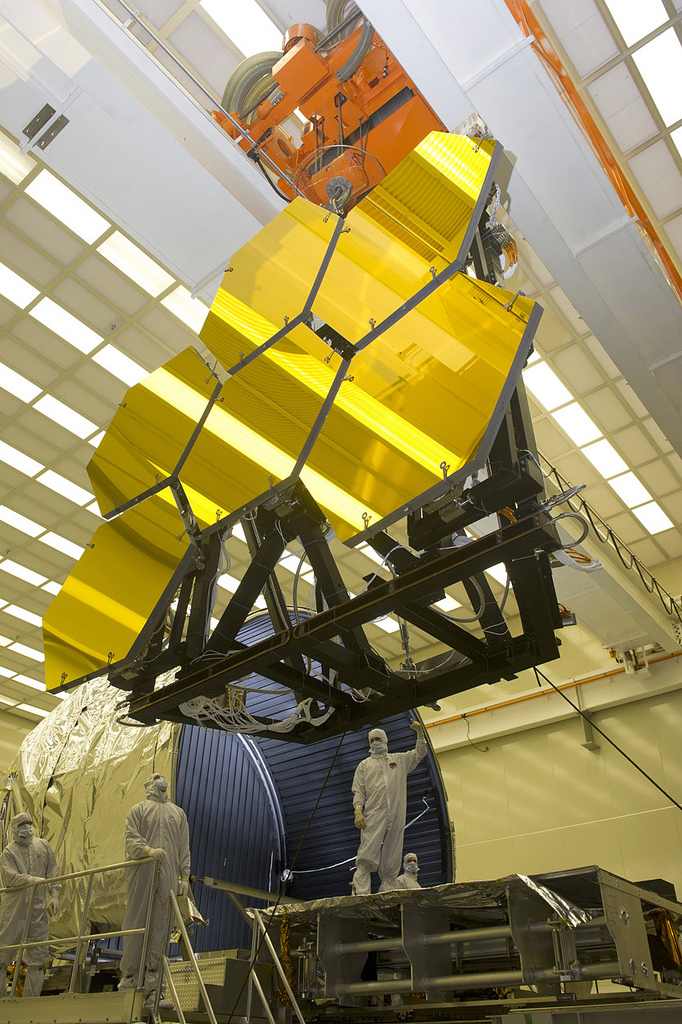 The mirrors undergo intensive deep-freeze tests in preparation for the coldness of space.

In 2018, far above the Earth, the pinnacle of human astronomical technology will unfurl its mirror and peer into the deep primordial ocean of darkness beyond the Milky Way, gathering ancient photons emitted billions of years before, to unravel the secrets of an early universe still mysterious to science. Its infrared sensors, working at wavelengths invisible to ground-based telescopes because of the absorption of light by the Earth’s atmosphere, will peer through clouds of dust to reveal planets around distant stars, and provide much sought-after clues into the mechanisms behind planetary formation. At least, this is the scenario that astronomers the world over are hoping will pan out for the James Webb Telescope (JWST), the long-awaited successor to the crisis-prone Hubble Space Telescope launched almost three decades previously. Last month, the first of many components necessary for the assembly of the finished telescope was completed by the European Space Agency (ESA), marking a key step towards the realisation of this dream.

The search for life around other planets and the investigation of the mysteries surrounding the beginning of the universe are amongst the most tantalising endeavours of modern science. And yet, despite all the fascinating new discoveries at the cutting edge of astronomy that the new telescope promises, its funding was almost withdrawn towards the end of last year by a cash-stripped American congress. Like Hubble, the JWST is funded partly by NASA, partly by the ESA, and requires the continued commitment of both publicly-funded organisations for its production and survival. This commitment is far from guaranteed, and the most likely obstacle to its procurement is, unfortunately, Hubble itself.

Since its launch in April 1990, Hubble has provided astronomers with a more precise estimate of the age of the universe (13.7 billion years), insights into supermassive black holes at the hearts of galaxies, and tantalising glimpses of the planetary formation discs around distant stars, discs that JWST should be able to see in even greater detail. Far beyond Earth’s atmosphere, Hubble can capture high-resolution images of distant objects unobtainable from the ground, most significantly in the ultra-violet region. At ultraviolent frequencies, incoming light, having journeyed sometimes over billions of light-years through interstellar space from the far reaches of the universe, is absorbed by a few kilometres of Earth’s atmosphere, rendering its sources invisible to observers from the ground. Space telescopes like Hubble thus enable us to see what we’ve never seen before, and it is hoped that JWST will provide the same insight in the infrared region, which is also blocked by the atmosphere, as Hubble has in the ultraviolet.

But, for all this, the fact remains that Hubble ended up costing a lot more than its original US400 million budget, with some estimates placing its total price at US6 billion to date. This includes the cost of repairing the telescope, after its main mirror was found to have been ground into the wrong shape, by designing new corrective optics systems and sending a crew of astronauts to fit them in orbit in 1993. Built using 1970s technology, its launch having been delayed for several years, and with its sensitivity to faint light sources sent plummeting by the mirror defect, Hubble suffered from a host of early problems that rendered its initial images far less impressive than the public had been led to expect. The telescope almost crossed beyond the brink of usability when three of the six second-hand decades-old gyroscopes that were supposed to stabilise it failed: one more such failure would have sent the telescope spiralling out of control.

Many of these problems were fixed when a corrective optics system and a series of new gyroscopes were fitted in the 1993 repair mission, and the early fears that the telescope would turn out to be a huge waste of time and money have been laid to rest by a host of brilliant Hubble images taken over the next two decades. But the pioneering craft’s faults have illustrated just how difficult it can be to successfully operate a complicated telescope remotely, in space, uncovering a host of technological problems that could potentially arise. This raises concerning questions in the minds of those responsible for distributing limited public funds in Europe and the United States. Will the JWST, which has already cost US3 billion, succumb to similar problems? Will NASA have over-hyped its capabilities, as it did for Hubble, and under-perform when the telescope is finally launched? It may take considerable work on the part of astronomers to reassure both politicians and public that the telescope really will deliver important advances in our knowledge of the cosmos, and will not prove to be the expensive flop that Hubble was so close to becoming.

A key concern for politicians will inevitably be that they retain the support of their electorates, so any expensive space telescope will need to provide the general public with results they can see, and discoveries they can understand, to justify spending so much taxpayers’ money on its construction. Here, too, Hubble does not provide the most promising of examples. Following the discovery of the telescope’s faults were several months of confused reports concerning its remaining capabilities, and the media and public were largely kept in the dark about exactly what was amiss, leading to widespread hostility towards the entire project. Only later were the early images taken by Hubble, which was much less sensitive than had been planned but still able to show nearby objects such as the planet Saturn in spectacularly high-resolution, released, to the reassurance of the public.

We can only hope that the agencies and scientists involved in both Hubble and its successor the JWST have learned from these mistakes, and will maintain the excitement of the public in the fascinating new frontier for astronomy that should be opened up by the new telescope. Its infrared sensors promise to reveal to us never before-seen light from the distant cosmos, ‘red-shifted’ by the expansion of the universe into this region of the spectrum. Its studies of the chemical make-up of our own and other solar systems should reveal the potential for life-friendly environments beyond our own planet. If the technological and public-relations gaffes of the early Hubble mission are repeated, it could prove a death-knell not only for these tantalising new horizons promised by the James Webb, but for future astronomy as a whole. It is vital, therefore, that the developers of JWST prove to the public that lessons have been learned, to ensure that the future remains bright for the human exploration of our cosmic environment.