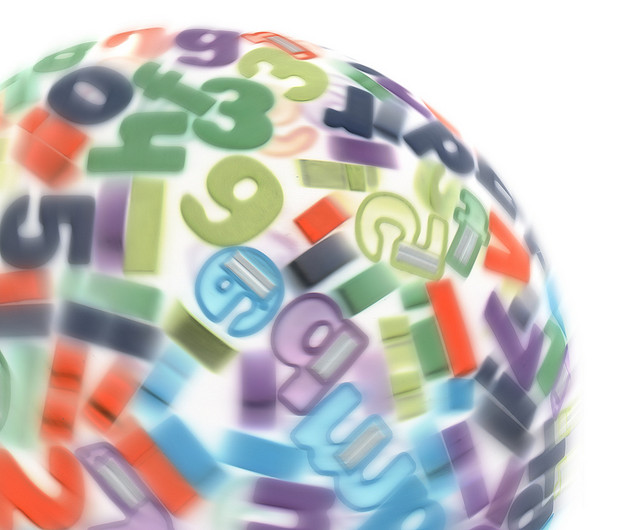 Colour-grapheme Synesthesia involves the association of letters and numbers with certain colours.

As far as rare perceptual experiences go, Synesthesia is possibly the most coveted and admired. Often associated with creativity, Synesthesia is the phenomenon in which the stimulation of one sensory modality elicits a sensory or cognitive experience in an entirely separate modality. Usually, only two modalities are paired: some Synesthetes have coloured hearing, whilst others taste sounds – all without any reliance on illegal substances…

Grapheme-colour Synesthesia is the second most common form of Synesthesia, and is the association of achromatic alphanumeric characters with specific colours. Some researchers remain sceptical that such a condition exists at all, although others argue that it can be distinguished from ordinary cross-modal matching using three criteria: the pairings must be highly specific, automatically elicited and stable over time. That said, these associations are not akin to hallucinations, as Synesthetes easily separate them from the outside world. Currently, it is believed to be caused by greater white matter connectivity between the regions in the inferior temporal lobe which process letters and colours, consistent with the idea that many young children are synesthetic but lose the ability when white matter connections become pruned during development.

However, research published earlier this year offers an alternative explanation of Synesthesia that may ruffle the feathers of protagonists and sceptics alike: Synesthesia may be partly learned. The study, by Witthoft and Winawer of Stanford University, documented 11 grapheme-colour Synesthetes whose letter-colour matches bore a striking resemblance to the colour pattern used in a set of magnetic letters manufactured by Fisher-Price in the era of the participants’ childhoods – and 10 of the 11 participants admitted to once owning the toy.

The finer details of the study’s results suggest this is more than a coincidence. The participants’ letter-colour matching data were assessed for consistency across time, to ensure that they were typical grapheme-colour Synesthetes according to mainstream criteria, and all were found to show consistent matches which resembled the Fisher-Price pattern. Although one subject (S11) showed only 14 matches to the letter set, the authors calculated that the probability of observing 14 or more matches in 26 chances is less than one in 1 billion, but the probability of having 11 matches is substantially less. Hence, it is reasonable to assume that the letter set did influence the Synesthetic experience of these subjects. 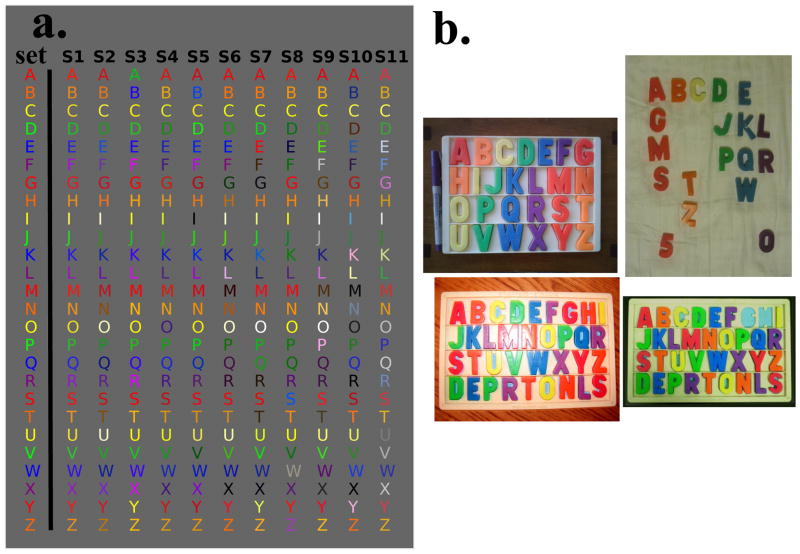 However, despite similarities to the Fisher-Price set, each participant’s matches differed reliably in the exact shade of the colour match, and participants could easily discern their responses from the rest. If the participants held these associations based simply on a verbal colour label, such as yellow, then this would not have been possible, suggesting that the synesthetic pairing is actually experienced, and vividly, again showing that the participants were genuine synesthetes.

Nonetheless, it is possible that the pattern of matches seen in these participants is typical of grapheme-colour Synesthetes, in which case the influence of the letter set would be negligible. However, other research shows that the matches observed in this study did not follow the typical pattern. Where the participants’ matches did differ from the Fisher-Price set, they tended to match the most common colour choices of typical Synesthetes. This latter finding has two important implications. Firstly, the colour matches that fit with the Fisher-Price pattern seem to have been learned from that letter set, and not a general external influence. Secondly, the divergences from the set which concur with more typical choices appear to have originated from general influences, suggesting that the Synesthetes in this study are no different to other grapheme-colour Synesthetes. In other words, these participants already had a tendency towards Synesthesia, and the Fisher-Price toy they were exposed to as children shaped, rather than caused, the phenomenon. Thus, memory can make a substantial contribution to Synesthetic experiences.

Nonetheless, many researchers insist that previous work shows Synesthesia to be a perceptual phenomenon. Indeed, Witthoft and Winawer’s research cannot, and does not, directly argue against a perceptual component to Synesthesia. However, a 2012 study by Hupé and colleagues found that Synesthetic letter experience did not activate colour areas of the brain, such as V4, suggesting that perception of genuine visual scenes is different in nature to Synesthetic experiences.

The same researchers also observed no differences between Synesthetes and non-Synesthetes in grey or white matter volume in colour areas. Conversely, differences in brain volume were found in non-visual areas, although it is unclear what these structural differences represent. In light of these findings, a purely perceptual explanation is suddenly much less persuasive.

Of course, associative learning cannot explain why only some people are Synesthetic, and the authors stress that many children using similar toys do not become Synesthetic adults. However, this does not necessitate a perceptual explanation, nor does it exclude the possibility of a strong influence from memory.

Previous work has shown that non-synesthetes, whilst not experiencing any automatic sensory pairings in daily life, often match stimuli in a manner consistent with typical Synesthetic choices when asked. For instance, like Synesthetes who associate musical pitches with colour, many lay people will match brighter colours to higher musical pitches, but in the Synesthete’s case, the hue of each pitch is specific and unaffected by the range of colours included in the stimulus set.

The authors suggest that perhaps this more meticulous and prolific learning of the association may outline the difference between Synesthetes and non-synesthetes. The general consensus, which has been shown to be influenced by culture, has been learned in more detail, and is frequently triggered, whilst for everyone else, these pairings are a vague idea of little consequence.

Perhaps this avenue of research can one day reconcile the advocates with the sceptics. After all, I didn’t believe in Synesthesia, but then I saw scents.

Short video on what it is like to have Synesthesia