To the human ear, Coronal Mass Ejection (CME) might sound like some dynamic malfunction of the body, but it goes beyond the corporal span of too many Earthlings to the still-insular scope of our own solar system. However, it does impact over seven billion sentient beings that we humans know of, some more than others. 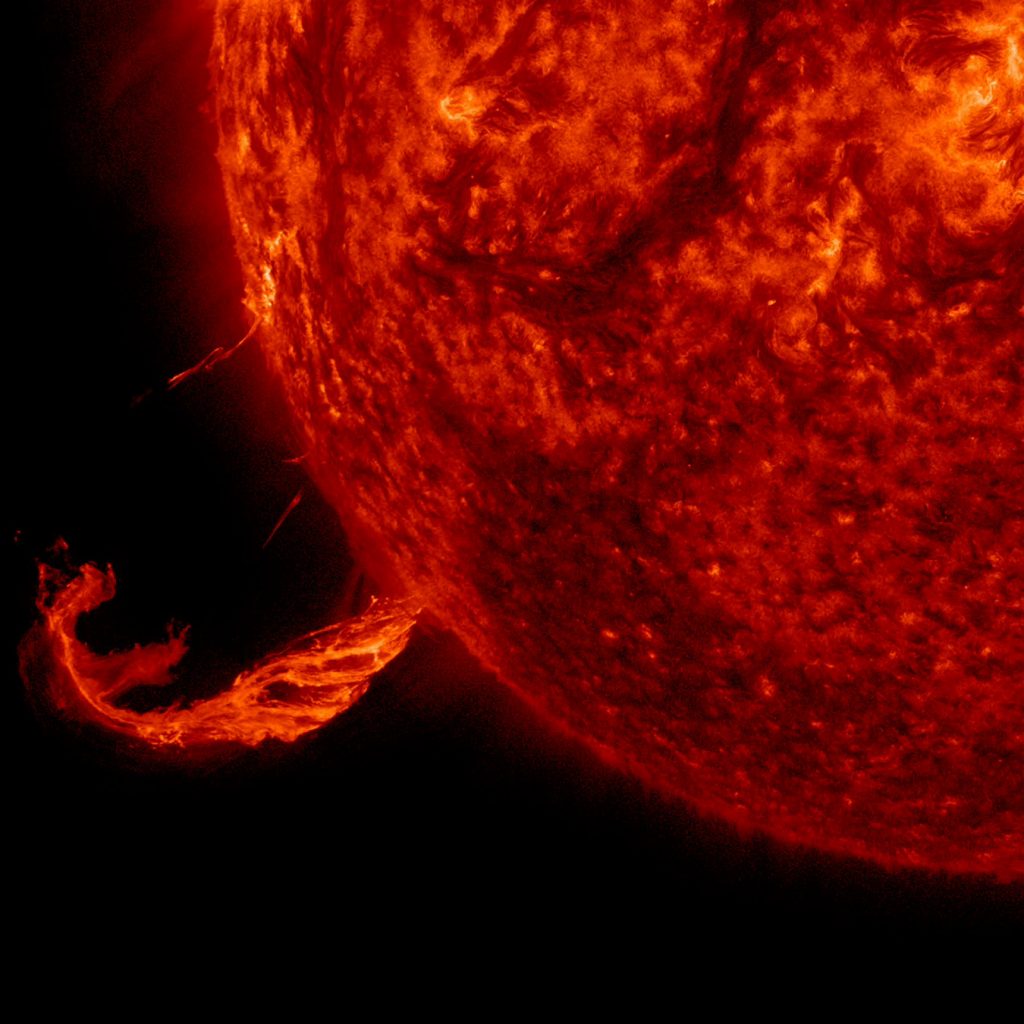 A coronal mass ejection is a huge release of magnetised plasma from the Sun’s outer atmosphere, the corona.

In March of 1989, a geomagnetic storm, caused by powerful CMEs released by the Sun, struck Earth, disrupting satellites and communications throughout the world and causing a massive nine-hour blackout in Quebec.  Happening during the Cold War, resulting in intense auroras, visible as far south as Texas and Florida, caused scores of people to fear that a nuclear strike was in progress.

What is known as the giant Halloween Solar Storm in 2003 also caused fear and created havoc, bombarding several satellites and disrupting terrestrial networks. Meanwhile residents in Texas and Florida, mindful of the cause, were able to enjoy colourful auroras usually not seen that far south.

Probably the worst solar storm occurred in 1859 at a time when the telegraph was the extent of electronics. The CME assault on Earth’s magnetic field was so powerful that auroras were seen around the world. In fact the glow was so intense that people in the northeastern United States could read a newspaper by the aurora’s light. Telegraph systems all over Europe and North America failed, some giving telegraph operators electric shocks. Scientists say that the solar storm of 2012 would have been of similar magnitude but passed Earth’s orbit without striking the planet.

Scientists anticipate that sometime in the future, a massive solar storm will hit, one that could leave millions of people without power for up to two years and cost between $1 and $2 trillion. In the meantime, America’s Space Weather Prediction Center, with tools such as the Advanced Composition Explorer (ACE), a satellite system situated 1.1 million miles in space, and an Arctic monitoring station, stand ready to give public warnings and adjust vulnerable satellites.

The basic visual evidence of CMEs is sun spots. What causes sun spots? The Sun’s very large and complex magnetic field is responsible.  The magnetic field at an average place on the Sun is around 1 Gauss in magnetic flux density, compared to the Earth which is 0.5 Gauss. Of course, this is misleading, considering that the local magnetic field in the vicinity of a large sun spot is as strong as 4,000 Gauss. Disruptions in such magnetic fields can spawn CMEs with the force of up to a billion hydrogen bombs.

What is the nature of magnetic field and their source? Comparatively weak, the magnetosphere of the Earth reaches out 36,000 miles into space, a magnetic field with north and south poles? In contrast, the Sun’s magnetic field, called the Interplanetary Magnetic Field (IMF), stretches well beyond Pluto, carried into a spiral by the solar wind.

The source for both is similar. A liquid metal in the outer core of the Earth has a displacement depth of some 1300 miles around a solid core. The liquid iron alloys are driven by a 2,000 degree Centigrade heat differential between the outer boundary of the inner core and the external boundary of the outer core. As we know from touching a heat source, energy flows from high to low temperature. In addition, metals conduct electricity. The pattern of the resulting magnetic flow is organized by the Earth’s rotation of 1040 miles per hour.

Meanwhile the much stronger magnetic field of the Sun is thought to result from plasma with high polarity churning in an 110,000 mile circular convection zone extending above the concentric circle of combined core and radiative zone of 400,000 miles from the centre of the Sun to the beginning of the convection zone. The electrical-energy-bound plasma is driven by a temperature differential of nearly 2 million degrees Centigrade, between the two boundaries of the convection zone. The flux pattern of the highly-charged magnetic field is driven by the Sun’s rotation speed of 4400 miles per hour.

But CMEs are not normal. They are the product of high sun spot activity (solar maxima) in an eleven-year solar cycle. Potentially deadly CMEs emanate when the immense energy within the Sun is suddenly drawn to snap twisted magnetic fields and send supercharged pulses of plasma through our solar system. If the Earth is in the target zone, we can be in extreme jeopardy.

An extreme geomagnetic storm is almost inevitable in the future: perhaps every 150 years for the 1859-level storm, but every 50 years for a Quebec-level storm. The total US population at risk for extended power outage for the former is somewhere between 20 and 40 million with durations of 16 days to 1-2 years. New transformers could cost up to $2.6 trillion, not considering possible outages and long-lived disruptions (GPS, for example) caused by failed or downed satellites.

The Royal Academy of Engineering’s 2013 report estimated that an extreme space weather event would damage and take out of service thirteen super grid transformers in the United Kingdom for weeks but up to a year.

As we mentioned, monitoring is in place: to warn residents of Earth, to stabilize orbits of satellites, and to decrease electric grid vulnerabilities. But the fact remains. Our primary source of energy, the Sun, can also pose serious threats to our livelihood.