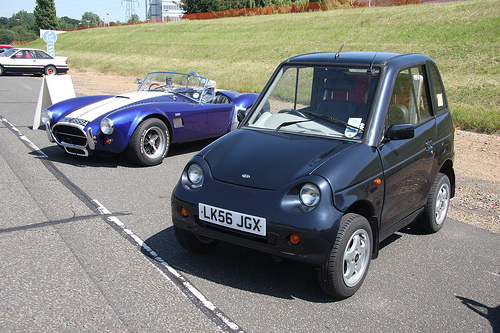 The G-Wiz is probably the best known electric car

Electric vehicles (EVs) are not a new concept but they are seen as one solution in reducing the negative effects of motoring – pollution, noise, resource degradation – without taking away the positive benefits that private motoring provide for the individual. Very shortly, the UK’s first mass produced EV – the Nissan Leaf – will start to roll off the production line in Sunderland, creating employment in the newly emerging “green-collar” industries, and a welcome economic boost for the region. Such is the desire for EV adoption to take off quickly that the government plans to give a 25% purchase subsidy per vehicle, up to a maximum of £5,000, with a total pot of £43 million. This fund could run dry once as few as 8,600 EVs are purchased, which is a mere blip considering there are currently over 33 million vehicles on the road in the UK.

Contrary to sudden interest in the press about this “new” technology, EVs have been available long before now. EVs were produced in the 1990s by Citroën, and by the Enfield Company as far back as the 1960s. Smith Electric Vehicles of Tyne and Wear have been producing commercial electric vehicles since the 1920s. There are also many people who decided long ago to reject motoring using fossil fuels and converted their vehicles to electric propulsion. Some drivers have been using EVs as road vehicles (and yes, they are road legal) for more than ten years, and who in and around London has never spotted one of the much maligned (usually by TV’s Top Gear) G-Wiz quadricycles?

In many ways, EVs are seen as an inferior technology – they have a limited range, they take a long time (usually four to five hours) to fully recharge, they are initially more expensive to buy, and what do you do if it runs out of power? On the plus side, EVs are quieter, create no emissions (though the production of the electricity itself is not emission free), are easier to drive, are cheaper to run, and pose less maintenance challenges. EVs have the potential to make our urban areas quieter, cleaner, nicer places to live and work.

One major thing holding back mass EV adoption is, hypothetically speaking, the lack of public recharging facilities. Without these facilities, where would someone who drove an EV recharge while out and about? Well, after doing something very radical and actually talking to experienced EV drivers, I found that the drivers don’t tend to worry about the lack of public recharging facilities because they rarely, if ever, need them. EVs are capable of completing fifty miles between charges, which is plenty for most drivers, and are recharged overnight using a domestic electricity supply, costing around £1 for a full charge on an off-peak tariff. Drivers never have to visit a petrol station, and none worry about the EV running out of power.

Some regions, including our own North East, are planning to make big investments in EV technology, believing that a visible recharging infrastructure will encourage the mass-market to adopt. While it may indeed encourage people to buy an EV and use it regularly, there is a fear that it will be underused and a waste of public money at a time when cut-backs are being made pretty much everywhere else. Some of the schemes will involve the drivers paying a subscription or joining fee, but most current EV drivers are unwilling to pay this as they know that, from long-term experience, they will need to use it very rarely. Indeed in London, while it is common to see EVs parked up, only a small proportion of these are ever plugged in to the free recharging points. While charging facilities will give drivers the confidence to go out in the knowledge they can find somewhere to charge up if necessary, the amount of recharging they will likely do while out and about is questionable.

Each region in the UK is in charge (excuse the pun) of rolling out its own infrastructure and setting the terms of its own public recharging scheme. There is also more than one recharging technology supplier – remember VHS vs. Betamax anyone? As an EV driver, you will need to subscribe to a scheme in an area using the chosen company’s technology, which will be fine if you never want to visit anywhere else, or if EV drivers from outside the region never want to come here. That’s like saying that you have to pay a contract fee to be a customer of BP to use their petrol stations, and have to find a BP owned petrol station every time you want to fill up. Surely, petrol is petrol?

As it is, EV drivers already have the appropriate technology in their homes to recharge their EVs – 13-amp sockets – and so do a plethora of other places such as pubs, shops, hotels, museums, and supermarkets. In the North East region alone, over £7 million is being invested in a charging network of 1,300 points. That’s over £5,000 per charging point! I can’t help thinking that using low cost technology (simple outdoor sockets on buildings in places where people go) will free up a lot of cash that could be used elsewhere – maybe for further purchase subsidies, or for letting drivers charge up for free. For cars that use around £300 of electricity each a year, even a sum of £1 million would give a year’s free motoring to over 3,000 drivers.

While I don’t discourage a region’s aspiration to provide recharging points in the name of economic development and to give confidence to current and future EV drivers in using their vehicles further afield, I would urge local policy makers to think about the needs of motorists and spend the money in a way that would maximise its impact. In a climate where harsh economic decisions need to be taken, the small is beautiful mantra needs to be recited a lot more often, not least because if the mass-market observe that EVs need nothing more than simple, low-cost technology, then even the most technophobic individual will start to see fewer and fewer obstacles to adopting.