Now that we’re getting into the colder months, who doesn’t love snuggling up under a blanket with a good book to read and a scented candle burning? 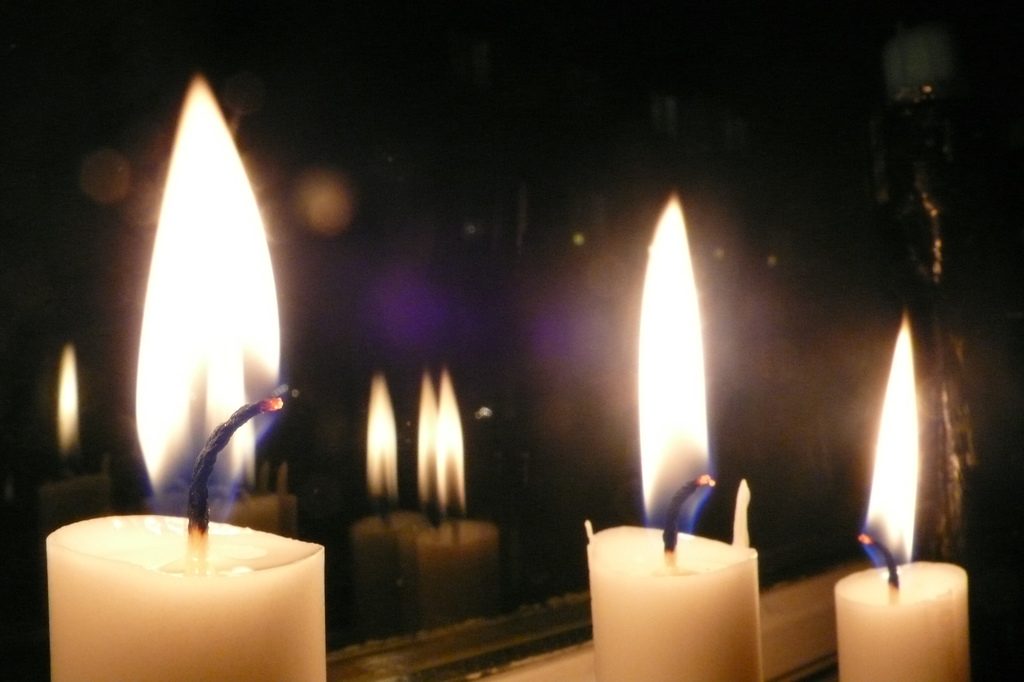 A lot of fascinating science goes into these candles, so sit back, relax and let me enlighten you (geddit?).

When you first light your candle (matches are a whole new story, and involve igniting white phosphorous by creating friction on the match), the flame flickers and may smoke a bit, as the combustion (burning) isn’t stable yet. But when it stabilises, the candle burns cleanly and steadily, affected only by variations in the surrounding air, or the fuel.

But what is the fuel? This is what the wax is for. But what actually is wax? There is no real definition for wax, so any material can be called a wax if it has the right physical properties. It usually has a low melting point just above room temperature, a low viscosity above melting point, no viscoelasticity (ability to return to its original shape after being deformed), is a poor conductor of heat and electricity, and can be polished. Wax is normally made of a complex mixture of fatty organic chemicals.

Candle wax is made of hydrocarbons, which are chemicals containing the elements hydrogen and carbon. Hydrocarbons are well known for being combustible, or easy to burn, and are what makes up car fuels like petrol as well. When the wick is set alight, the heat from the flame melts the wax close by, and the liquid wax travels up the wick. This motion against gravity is called capillary action, and is possible because the intermolecular forces between the liquid and the wick are stronger than the effect of gravity.

The heat of the flame vaporises the liquid wax, turning it to hydrogen and carbon gas which can then react with oxygen to produce water vapour and carbon dioxide. We know that it is the wax vapour that burns, not the liquid wax, because if you place the end of a metal or glass tube into the flame, you can light the other end of the tube, as the vapour travels up through the tube and fuels the second flame. This reaction releases a lot of energy, in the form of heat and light. There is enough heat (in fact, actually about a quarter of the energy given off) to radiate back and melt more wax, and the cycle continues.

If you look closer, you might notice that the flame isn’t all just the yellow colour we associate with candles. There is actually a small blue section close to the base of the flame, then a dark orange section above it, yellow above that, and then more blue surrounding the whole flame. The blue area is rich in oxygen, and here the hydrocarbons vaporise and much of the hydrogen reacts with the oxygen. Above that, in the darker region, there is less oxygen. There are still some forms of carbon left, and these continue to burn, and may form small hard particles of carbon, which we know as soot. These particles rise into the yellow section before they ignite and emit mainly yellow light, but also all of the other wavelengths in the visible spectrum. The final, blue section is often called the veil, which surrounds the flame. Here, combustion is almost complete, since there is the most oxygen, making this also the hottest part of the flame.  However, the wax never burns completely, so there is always some smoke. This is an aerosol of tiny particles of unburned carbon mixed with steam, which, if you’re not careful, can leave a black carbon deposit on the ceiling above the candle (you might want to try to avoid that if you’re hoping to get your deposit back!). 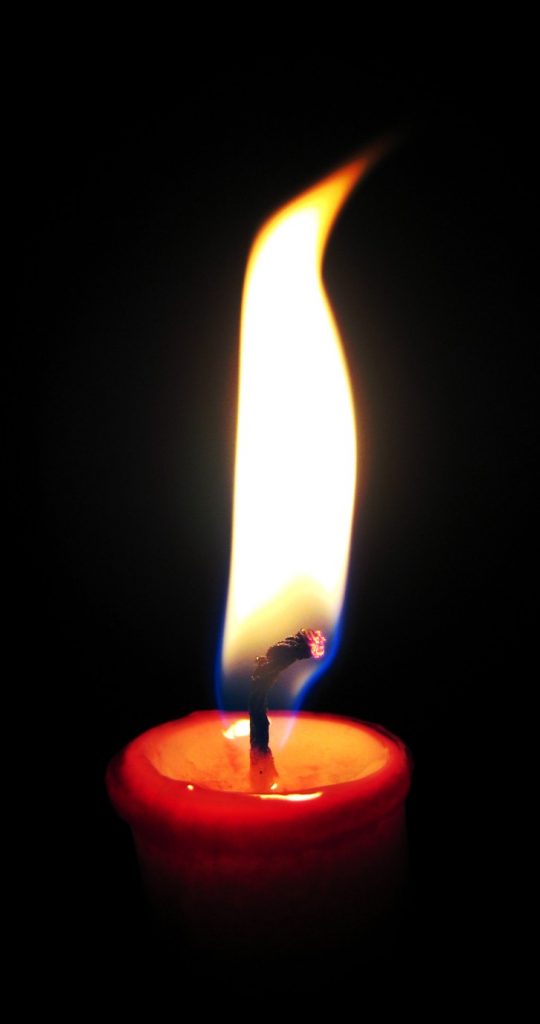 It is surprising how hot candles can get. Depending on the type of wax and how much oxygen is present, the wick might reach about 400°C, but the flame will be much hotter. The blue veil is the hottest part, at about 1400°! The yellow section is often around 1200°C, and the dark orange around 1000°C. The pool of wax is normally about 60°C, and this is why if you’re brave enough you can quickly dip your fingertip in, letting the wax solidify on it as it cools.

Why stop at a plain old candle though? Scented candles are the real hot stuff. The only difference is that these contain some added chemicals called VOCs (volatile organic compounds). These are chemicals which turn to gas easily and trigger the smell receptors in your nose. Unfortunately, there have been reports that these chemicals can turn into formaldehyde in the air, which can cause respiratory problems, erosion of the gastrointenstinal tract, or even cancer. This worrying study was very small though, and most scientists agree that lighting a candle every now and again isn’t going to do you much harm.

Your recipe for a cosy evening in is covered then, but there are many other uses for candles. They even used to be used as timers, with timings etched into the sides. These days though, a huge use for candles is on birthday cakes. These use the same principles, but what about those annoying trick re-lighters? These have some magnesium added to the candle’s wick. When the candle is burning, and liquid wax is being drawn up the wick, the magnesium is shielded from oxygen. However, when the candle has been blown out, and the wick isn’t hot enough to pull the wax up any more, the magnesium becomes exposed, and is still hot enough to ignite, which relights the gaseous wax. If you look closely enough, you can even see tiny bits of magnesium going off before the candle relights. Don’t look too closely though, or you could get singed!

You might wonder why the candle flame always points up. This seems to be going against gravity, but actually it is the exact opposite – gravity is what’s causing it to be that way. When the flame heats up the nearby air, the molecules spread out more and the air becomes less dense. It starts to rise so that the colder, more dense air moves in at the bottom of the flame to replace it. This cold air is heated and rises, creating a cycle. The circular motion of the air creates a convection current, which is what gives the flame its shape.

What if there isn’t any gravity though? This was tested in the late 1990s by NASA, and they found that in microgravity (very low gravity) the flame becomes spherical. There is no longer a convection current moving the hot air upwards. They’ve fascinated homemakers and scientists alike; candles are clearly more than the romantic and cosy icons they’ve become. They are feats of thermodynamics and chemistry, and knowing that, the next time you light one up, it might be even more beautiful.