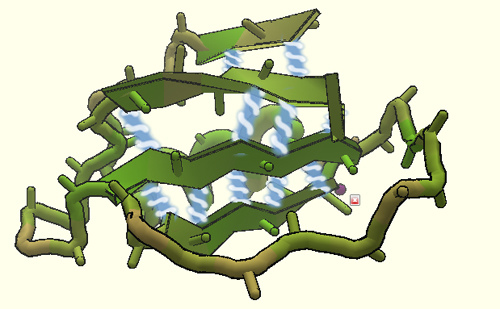 How do unfolded proteins kill a cell via an organelle called the endoplasmic reticulum?

Imagine a puzzle-piece. The only thing which makes it work is its shape, and exactly the same is true for proteins. The nucleus churns out messages made from genes, and these messages are cleverly turned into proteins which keep each one of our 100 trillion cells working smoothly. Each individual protein undergoes a series of manipulations until it is has been uniquely folded to form a fully-functional shape. Only in this one shape can the protein carry out its job and help keep the cell ticking over.

Protein folding is a remarkably complex story. When the protein is initially synthesized from its message, it’s practically a baby. It needs to grow up – quickly. Most protein ‘maturation’ occurs in the organelle called the endoplasmic reticulum (ER), which is a complex protein-folding ‘factory’ close to the nucleus. Many enzymes reside inside the ER to make the correct additions and shape-changes to the proteins. Essentially, these proteins undergo a quality-control assessment before being released for use by the cell.

This process of protein production normally runs like clockwork. But what happens if the ER has to slow down the rate of folding due to a protein overload? Or maybe a protein can’t get folded properly due to a mutation in the original gene it came from. As you can imagine, the cell quickly notices when it suddenly looses the supply of proteins that performs various different jobs. The ER which is frantically trying to solve the problem becomes stressed and a cellular response is switched on to try to solve it.

This response is known as the unfolded protein response and it plays a major role in the everyday life of a cell. This response starts by an emergency signal being passed from the ER to the nucleus. This signal is produced by three different sensors that are lodged in the membrane of the ER. Part of these sensors is inside the ER, and thus when they ‘feel’ the growing number of unfolded proteins, the message is sent. When this message reaches the nucleus, the first thing that happens is that genes which encode less essential proteins are turned off, resulting in a smaller incoming load for the ER. This in turn buys time for the ER to try to resolve the crisis. Secondly, there is hyperactivation of a few genes which give rise to the previously mentioned folding enzymes, called chaperones and foldases. This is done as an attempt to clear the load of unfolded proteins in the ER and restore it to its healthy state.

If the ER is restored, then the cell simply carries on as normal. However, there are cases when the load of proteins that can’t be folded is just too great. When this happens, the three sensors are active for a much longer time. The profile of messages and pathways they activate changes drastically. It is thought there is a point beyond which the ER and the cell cannot be rescued; the cell has been deprived of functional proteins for too long and the mass of non-functional proteins in the ER is beyond repair. The signals from the sensors that were once helping the cells now change, as the only way left out of this problem is cell suicide.

Through complicated signalling pathways which are still being elucidated, the cell begins to shut down, and eventually dies. As you may know, millions of cells die and are created each day, so why is there so much interest in this type of cell death? The answer is human disease. When a group of cells die in the brain as a result of the ER being stressed and full of unfolded proteins, Parkinson’s or Alzheimer’s disease may result. A similar story is true for Diabetes due to cell death in the pancreas. This has lead to a lot of research in trying to understand the nature of the messages that come from the stressed ER, and how susceptible each message is to manipulation. By manipulating these messages, using drugs for example, one may be able to extend and prolong the ‘pro-survival’ pathways and inhibit the ones which encourage cell death. Although many questions have to be answered before this can happen, when it does, it has the potential to better the quality of life of the human population.