COVID-19: Will an end shortly be vac-seen?

With nearly 20 weeks since the first confirmed UK COVID-19 case and over 12 weeks since Boris Johnson announced the UK’s move into lockdown, a question on many people’s minds is: when will this end?

Pandemics generally conclude with herd immunity, either achieved naturally or via vaccination. Natural herd immunity, which many claim to be the UK’s original strategy, involves allowing enough of the population (usually around 70-90%) to become infected and develop natural resistance. The uncontrolled spread of a virus with a death rate as high as COVID-19, however, would overwhelm healthcare systems and result in many unnecessary deaths. The alternative, much safer route, requires the development of an effective vaccine which provides long-term immunity for a sufficient number of individuals.

Numerous research groups are working on developing this safer route, with over 120 candidate COVID-19 vaccines currently being investigated. At the forefront of vaccine development in the UK is a team based at Oxford University. Their ChAdOx1 nCoV-19 vaccine was found to protect monkeys from pneumonia, but concerningly the noses of vaccinated monkeys harboured as much virus as unvaccinated primates. Importantly, from a safety aspect, researchers observed no evidence that ChAdOx1 nCoV-19 enhanced the disease in vaccinated animals. This phenomenon is known as antibody-dependent enhancement in which antibodies made in response to a vaccine can worsen disease upon infection by the live virus. These antibodies bind to the virus and, rather than  neutralising it, can aid viral entry into cells. According to virologist Kevin Gilligan antibody-dependent enhancement is “a genuine concern” as it compromises the safety of a vaccine, thus its distribution throughout the population. The Oxford group began the first European human trial in April with over 800 healthy volunteers being recruited and is set to progress into second and third phases, which aim to recruit over 10,000 people. Encouragingly, the British pharmaceutical company AstraZeneca working with Oxford University has claimed it has the capacity to administer 2 billion doses of the vaccine in the next 2 years. 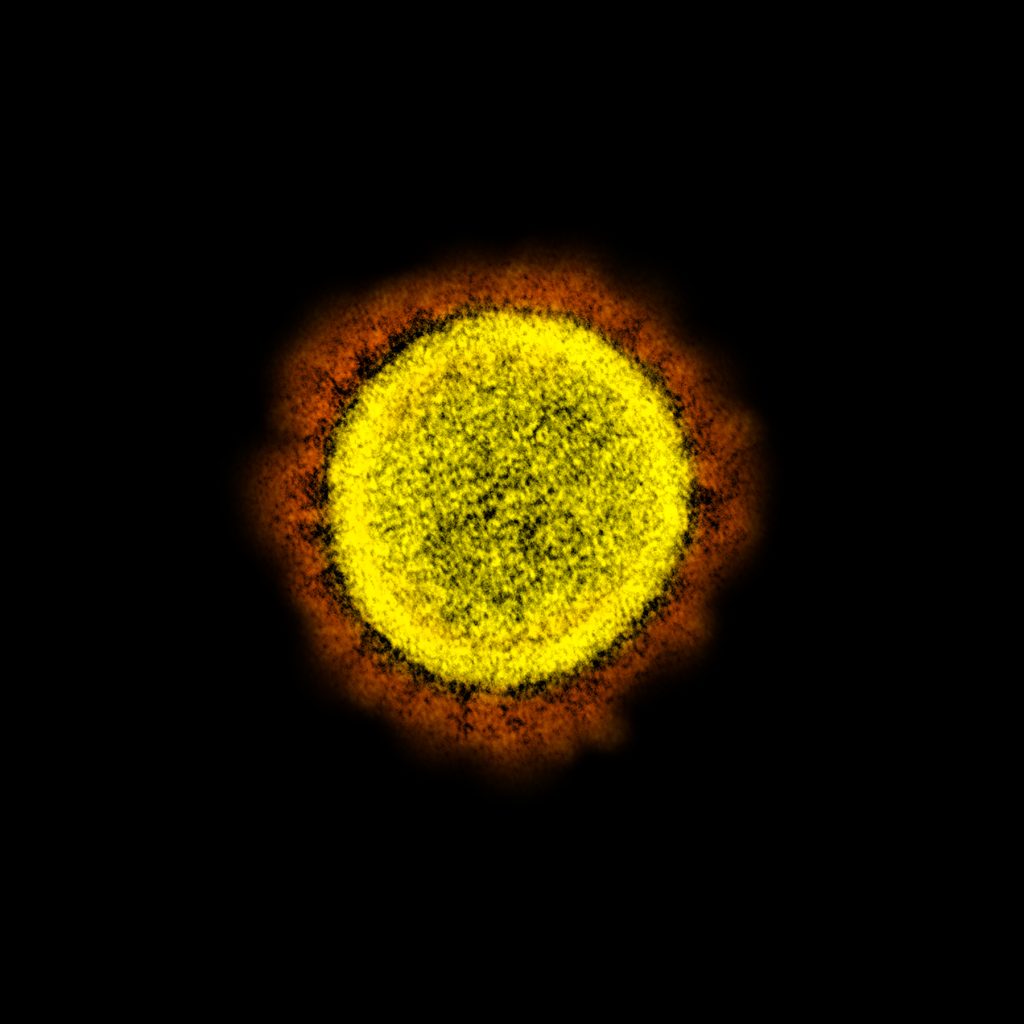 Imperial College is also developing a vaccine, however, using an alternative approach. This team is working with an RNA vaccine which instructs cells to make the ‘spike’ protein present on the surface of the virus. Human trials are due to commence of June 15 involving 300 people. Outside the UK, there are 4 human trials ongoing in the US, and 5 in China. Results of all these human trials are eagerly anticipated with the hope that we can find an effective, safe vaccine. 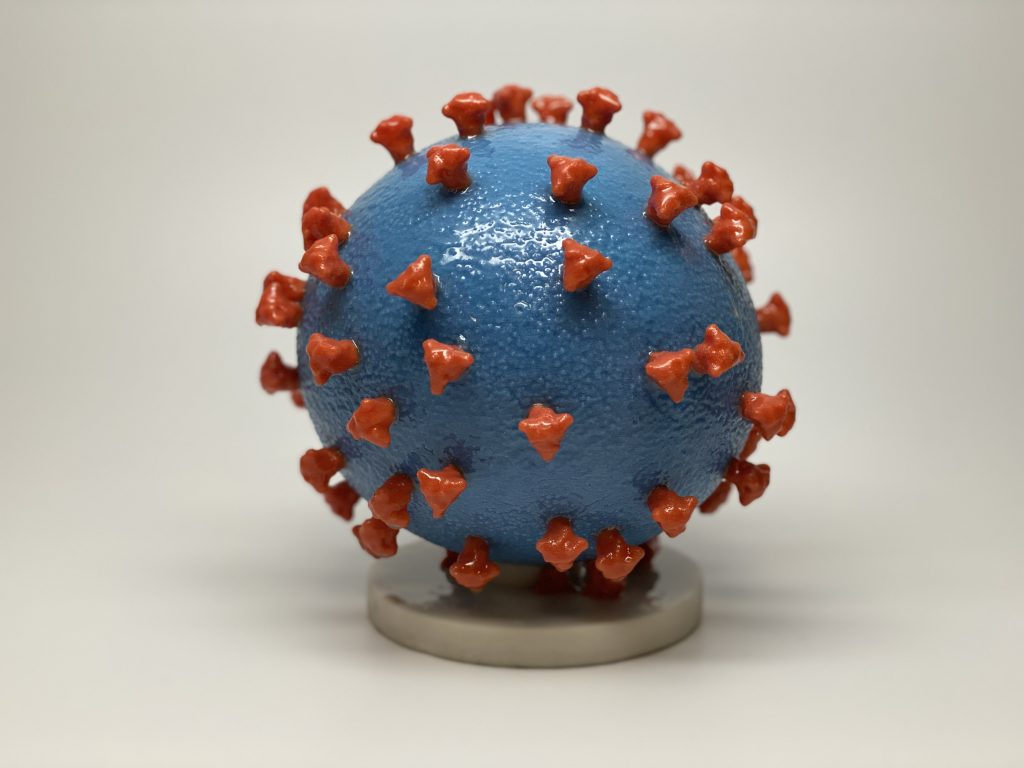 3D print of a SARS-CoV-2 (the virus that causes COVID-19) virus particle. The virus surface (blue) is covered with spike proteins (red) that enable the virus to enter and infect human cells. The spikes on the surface of coronaviruses give this virus family its name – corona, which is Latin for “crown,” and most any coronavirus will have a crown-like appearance. Image and caption by NIH. Available on Flickr under Creative Commons 2.0 license.

While it is exciting that human trials are underway, it will be some time before a vaccine is ready for distribution.  Experts predict one will most likely be available by mid-2021. Given the current state of the pandemic and its effects on our daily lives, this may seem like a significant wait. Yet, if a vaccine is available this early it would be a great scientific achievement. Usually, vaccines take around 10 years to develop, the fastest so far, that being the vaccine for mumps, taking 4 years. This is because vaccine development involves multiple stages. Vaccines must go through animal tests before entering humans, and human trials involve 3 phases. Following the completion of trials and their subsequent approval, the vaccine needs to be mass-manufactured and distributed. Indeed, efforts to speed up this process include manufacturing doses before the vaccine is proven to work. However, the importance of developing a vaccine quickly while still ensuring safety cannot be stressed enough. Lessons can be learnt from the 1976 US political campaign to mass-vaccinate against a swine flu outbreak, which resulted in more than 450 people developing the paralysing Gullian-Barre syndrome.

Despite the numerous human trials and the potential of each vaccine investigated, the possibility that we cannot produce an effective vaccine which provides long-term immunity should be noted. For instance, more than 30 years following the identification of HIV we still lack a vaccine, partly because it is unclear what type of immune response is required to eliminate the virus. Another reason why vaccines may be difficult to develop is the virus may have a high mutation rate. Influenza mutates rapidly meaning that each year a new vaccine must be developed. Early evidence suggests the new coronavirus (SARS-CoV-2) mutates at a slow pace; good news for the prospects of successful vaccine development. Concerningly, however, we have never developed a successful vaccine for a coronavirus (the family that SARS-CoV-2 is part of). Furthermore, they usually cause upper respiratory tract infections, to which our immune system typically does not mount a strong response to; it is difficult to develop a vaccine against a virus which itself does not trigger strong immunity. This is demonstrated by common colds (some caused by coronaviruses), which troublesome in terms of vaccine development as immunity arises initially but fades such that re-infection usually occurs the following year. It is too soon to say for certain how long immunity remains for COVID-19, although it is not encouraging that early studies report antibody levels begin to fall after the first month. Despite this, antibodies are not the only defence mechanism employed by the immune system. Another concern, again relating back to antibody-dependent enhancement of disease, is that vaccines for SARS and MERS (both coronaviruses), caused serious lung inflammation. Therefore, are not overly safe for distribution.

Taken together, such may seem quite disheartening. Nevertheless, it is unlikely we will end up with nothing; even if a vaccine is not 100% effective, it may attenuate the disease and make it less likely to die from, as seen in the Oxford trials which led to the prevention of pneumonia  in monkeys. Furthermore, if a successful vaccine appears unachievable, focus may shift to treatments, such as the antiviral drug remdesivir which has shown early promise.

So, where do we stand currently? For the foreseeable future, the virus is certainly here to stay. It will take time to develop a vaccine, and there is a possibility we may never have one. On top of this, there is a chance that a vaccine may only give one year protection, meaning COVID-19 will become endemic and remain with us, popping up every now and then, similar to the flu. Further, mass-manufacturing the vaccine and delivering it globally through an efficient vaccination programme is a difficult task. We will need to learn to live with the virus and adapt to the ‘new normal’ many are alluding to. Maintaining social distancing, avoiding large gatherings in enclosed spaces, hand washing, and wearing masks where needed are all important for reducing the spread of the virus and supporting our healthcare systems while the search for a vaccine continues.