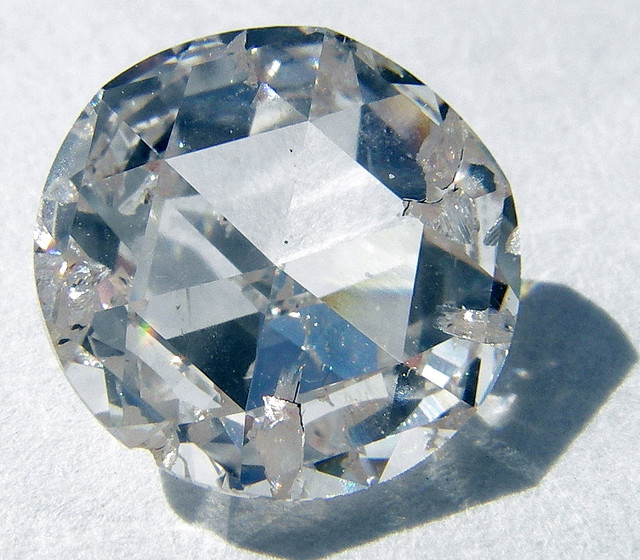 As Marilyn Monroe stated “diamonds are a girl’s best friend”. But with female scientists becoming more prominent, perhaps it’s time to understand what diamonds are on a molecular level, allowing us not only to glitter whilst wearing diamonds but also to sparkle with our scientific knowledge!

Most natural diamonds are formed at high temperatures and high pressures at depths of 87 – 120 miles below the earth’s crust. Diamond-bearing rock is brought to the surface by deep-origin volcanic eruptions. Diamond is ultimately made out of carbon. As carbon is my next element to write about, this is how diamond links in – don’t worry I’m going on a bit of a tangent, but who doesn’t like a bit of variation in their weekly column reading?

Diamond is made up of carbon atoms arranged in a variation of a face-centred cubic crystalline structure, with strong covalent bonds between the carbon atoms to give a diamond lattice. The various facets of the cubic arrangements of the carbon atoms include the simple cube or octahedron, the rhombicosidodecahedron (dare you to make your friends say that quickly whilst drunk from a night out!), the tetrakis hexahedron and also the disdyakis dodecahedron.

Apart from looking all sparkly and precious, diamond is actually the hardest known natural mineral getting a 10/10 on Mohs scale of mineral hardness. It is because of this property that diamonds are also used in cutting and polishing tools, not just exquisite jewellery.

The record for the highest-paid diamond per carat ever was set in Hong Kong on December 1st 2009, where a 5-carat vivid pink diamond was sold for an astonishing 10.8 million. 5 carats is relative to 1 single gram of diamond. A bit pricey if you ask me! On the other end of the scale, one of the largest ever cut diamonds is the ‘Cullinan 1’, also known as the ‘Great Star of Africa’. The ‘Cullinan’, weighing in at around 3,000- carats, forms part of the Crown Jewels. In 1985, however, the now-largest cut diamond, the ‘Golden Jubilee’, was found. Both of these diamonds were found in the Premier mines near Pretoria in South Africa. Maybe this summer holiday we could book a trip there and try our luck at discovering a bigger diamond…

Another diamond, once the biggest in its time and also part of the Crown Jewels, is the famous ‘Koh-i-Noor’. This diamond is believed to have a curse on it that only affects males and so only Queens have the fortune of wearing it – another reason why diamonds really are ‘not for men’! I mean Yorkie bars have always been advertised ‘not for girls’ so its fine boys – you have the Yorkie chocolate and us girls will have the expensive diamonds!