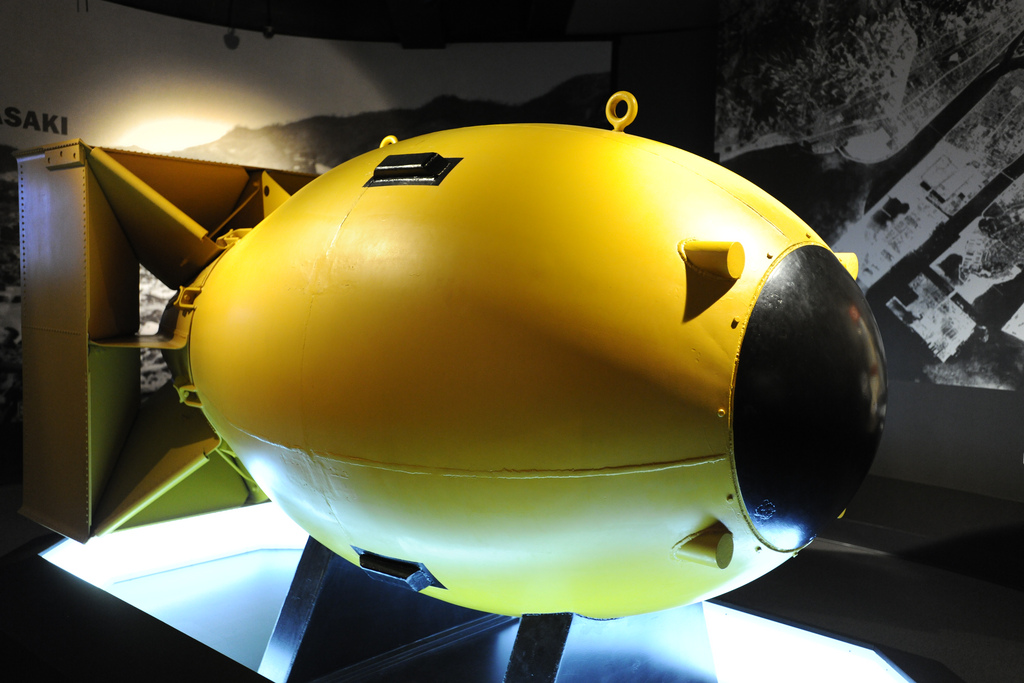 A mock-up of ‘Fat Man’, the plutonium bomb dropped on Nagasaki

How likely is your family name to die out? Nineteenth century thinkers were intrigued by this question and developed the concept of a ‘branching process’ to answer it. Assuming that surnames are passed on exclusively through the male line of a family, the survival of a name can be understood by looking at the how many sons each man is likely to have. If the mean number of sons each man has is less than or equal to one then their name will go extinct in the long run; if it is greater than one then the probability of extinction is less than zero but survival is not certain. Generally speaking the fate of a rare name will be decided within relatively few generations: it will either become more common, in which case its survival is probable, or it will dwindle and die out.

It goes without saying that this is a very crude model of family trees: it doesn’t allow for, amongst other things, changing family sizes, or trends towards hyphenation rather than displacing a woman’s surname with her husband’s. A more objective target for investigation would be the transmission of the Y-chromosome through a male line of descent, or of mitochondrial DNA through a female line. Nevertheless, the maths involved is rather elegant and has some surprisingly useful applications, including the design of nuclear weapons. In order to understand why a curiosity of 19th century theoretical genealogy was revived to serve as an agent of destruction it’s necessary to sketch out a little background.

The idea of chemical chain reactions has a long pedigree: a reaction may create two products, which then interact with other reactants, creating four products and so on until the supply of reactants runs out. Physicist Leo Szilard realised in 1933 that if an atom could be found which, after being hit by and absorbing a neutron, released energy and more than one new neutron then a chain reaction could be sustained, releasing colossal quantities of energy in a very short time. He filed a secret patent for such a bomb with the British Admiralty, but had no idea whether such a weapon was actually possible. Then, in 1938, scientists found that the isotope Uranium 235 releases substantial energy under neutron bombardment.

If it also emitted more than one neutron then the atom bomb was a very real possibility. Szilard quietly approached the groups working on this question in the US and France, asking them to keep any results secret for fear of German physicists realising the military possibilities of the material. As feared, Uranium 235 turned out to emit an average of about 2.5 neutrons, making the atomic bomb a very real possibility. The ‘publish or perish’ culture of academia has a long pedigree however, and despite Szilard’s pleas the French group couldn’t resist the chance to get a paper into Nature. The recent controversy over publishing details of a mutated flu strain pales in comparison!

Now, recalling the branching processes discussed earlier it’s clear that, in order to sustain a chain reaction it’s necessary for each splitting nucleus of U235 to trigger an average of more than one other nucleus. This is a much stricter condition than merely emitting more than one neutron though for two main reasons.

The first potential problem is that U235 forms only around 0.7% of naturally occurring uranium: the remaining 99.3% is a different isotope (U238) and any neutron hitting one of these atoms is essentially ‘wasted’. This is why uranium is ‘enriched’ before use, i.e. increasing the proportion of U235; in the majority of cases this is done by pumping uranium gas into a centrifuge, separating the heavier U238 atoms from the lighter U235 ones. Enrichment increases the chance of a neutron hitting a fissile atom, and hence the probability of triggering a chain reaction. Conversely, nuclear power stations use neutron-absorbing control rods to control the flux of neutrons and prevent the reaction from getting out of control.

The second problem is that nuclei are tiny compared to atoms and some neutrons will escape the mass of uranium without hitting anything at all. The proportion of escapees depends on a number of factors, with size and density being most interesting here, but the shape of the mass and a number of other factors also have an impact. How much uranium would be needed to make a bomb? Initial estimates suggested the answer would be given in tonnes! Any possible weapon would be too big to be transported by plane, although plans were considered to use a boat-delivered bomb to lay waste to enemy ports. However, later calculations showed that the critical mass could be achieved with a much smaller quantity of fissile material.

This ‘problem’ is also vital to nuclear weapon safety (oxymoronic though that phrase may be). The fissile material in a bomb is kept below critical mass in one of two ways. The simpler one is to split it into two separate pieces, each subcritical individually. The bomb is then detonated by using conventional explosives to ‘fire’ one piece into the other, called a gun mechanism for obvious reasons. A more complicated mechanism starts with the material in a single piece which is nonetheless kept subcritical by a relatively low density and sometimes a hollow centre. Precisely timed detonation of shaped charges is then used to compress the fissile material, increasing its density to critical levels. This second process might seem unnecessarily complicated, but it persists because plutonium can’t be detonated by the gun method and because only this method can be used in the first stage of a thermonuclear weapon, also known as a hydrogen bomb.

In conclusion, an initial insight from branching processes leads to the key ideas behind atomic weapons. It’s a bitter irony that the techniques devised to understand the survival of bloodlines underpin the means of their annihilation. For better or worse, mathematics is universal.