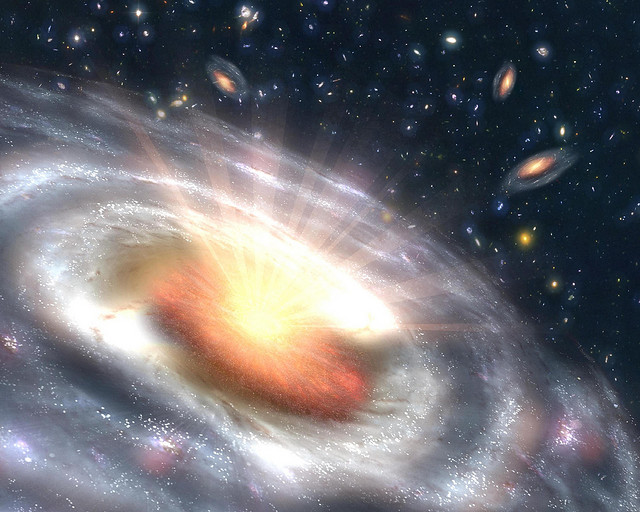 Can anything escape from a black hole?

Black holes are one of the most mysterious astronomical phenomena of the known Universe. They are produced when extremely massive stars undergo gravitational collapse, resulting in an inconceivably large mass packed in a very small volume. This produces a force of gravity so strong that escape velocities – the speed necessary to break away from an object’s gravitational pull – exceed the speed of light. The idea that nothing can escape a black hole is so fundamental in our understanding of the phenomena that questioning it seems ridiculous. There is a theory, however, that suggests that particles are able to escape from inside. Black holes may not be completely “black” after all.

In classical mechanics, a vacuum is an area in which absolutely nothing lies. By considering space at a quantum level, however, a vacuum becomes a region in which subatomic particles and anti-particles are being continuously created and destroyed. There is a principle which states that the exact energy of a particle at a specific moment in time cannot be determined with complete certainty.

More precisely, Heisenberg’s uncertainty relation states that the uncertainty of a particle’s position multiplied by the uncertainty of its momentum must always be greater than or equal to a particular constant, so determining one measurement more precisely leads to reduced knowledge of the other. Any uncertainty in the measurement of energy must manifest itself in an uncertainty in the mass present as a consequence of Einstein’s famous equation E=mc2, or energy is equal to mass times the speed of light squared. It therefore follows that at any place, even in a vacuum, the amount of mass present cannot be explicitly specified.

The particles that are generated are not real in the sense of being able to be observed, since they only exist for an extremely short period of time before the particles and anti-particles interact with each other and are mutually annihilated.

Large black holes with an initial mass of around 1015kg would have exploded by now. If this is the case they would have emitted around 1030 g cm2/s2 in the last 0.1s of their lifetime. In relative astronomical terms this is not a large or easily detectable amount, so detection of such radiation is almost certainly impossible.

Hawking radiation is therefore likely to remain a wholly theoretical phenomenon in the long term . This does not, however, prevent scientists from trying to support its existence through research. For many years physicists have created situations which mimic some of the properties exclusive to black holes. Whether using a sonic black hole to trap sounds, or water waves or lasers to trap light, research is ongoing to support and attempt to prove these theories of Hawking radiation.

One of the most recently developed experiments of this type involves using a strong laser to alter the refractive index of a material, to create a system from which light cannot escape. Detectors were used to determine if particles had been produced in the region analogous to the event horizon of a real black hole. This experiment has been recently successful and the predicted phenomenon was observed. Of course it cannot be said that laboratory based work acts as conclusive proof for the theory but the results produced are fascinating.

The fact that there may never be conclusive proof as to the existence of Hawking radiation, or lack of, provides an ambiguity which is filled with the possibilities for improved experiments in the future. The evidence provided by analogous models cannot be taken as substantiation for the presence of Hawking radiation. In conclusion, it is completely speculative to insist that black holes are not completely “black”. It remains, however, an unsolved question at the forefront of cosmological physics and one which will continue to encourage exploration into the possibilities introduced by quantum mechanics.