A Beginner’s Guide to Licking Rocks 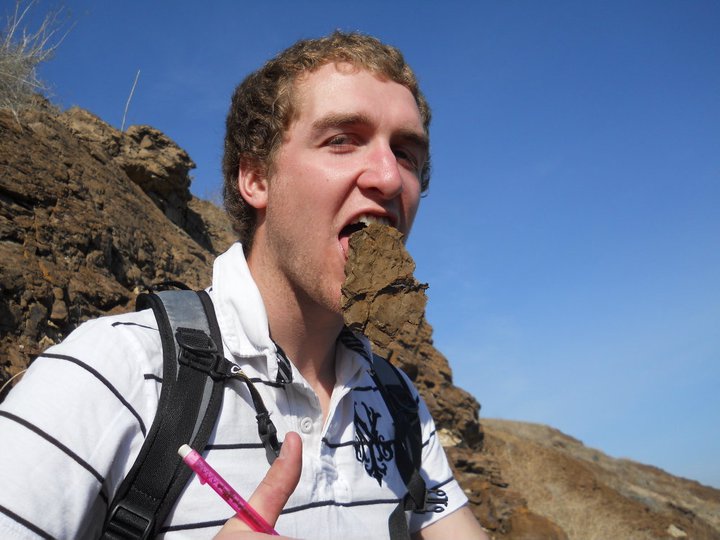 A geologist licking “umber”, a very dry rock which sticks to the tongue

You might be wondering why you’re being offered advice on how to lick a rock. Who licks rocks? you might find yourself asking. Well, there’s a little known species called the geologist and they are experts at said task. Some people may have heard of a geologist but most will never have seen one as they still spend much of their time in the wild. Excess facial hair, large collections of walking boots and the ability to pronounce “molybdenite” correctly are all indicators that somebody may actually be a geologist. So what are they and what do they do? They’re creatures obsessed with rocks and beer to a level beyond belief. They devote their time to volcano poking, fault finding, high-risk colouring and rock hunting, an activity in which the geologist traverses the countryside for miles and miles, risking life and limb, in the hope of locating a “fresh outcrop”. A geologist is never more than 50 yards from their geological hammer but they are not to be confused with geographers whose field weapons are typically blunt, trowels for example, and unlike geographers, geologists don’t require assistance tying their bootlaces for a day of fieldwork.

Whilst the aforementioned activities are fundamental to a geologist’s survival, probably their most favourite pastime is rock licking. This may come as a surprise to the non-geologist but it literally does mean what it says. This seemingly strange activity may seem unnecessary, dirty and demoralising to your average Joe but to a geologist, this is science! By simply licking a rock, a geologist can travel back through time to see what it was like millions of years ago, in the place where the rock was deposited. With the help of this handy guide to rock licking, you too can have the same life changing experience, you’ll be sorry you hadn’t done it sooner!

So what was all that for? Obviously it’s a fun pastime, it’s exciting and it’s engaging, mesmerising some would say, but what is its purpose in life? Licking rocks is not done just for fun. Evidence from the rock tells the geologist what the environment was like at the time it was deposited. For example when the rocks at Prebends were deposited, Durham was a tropical location not far from the equator, most of England was underwater and any land that was exposed was covered in dense forests. Those forests are what formed the coal. Deltas feeding from the north (now known as Scotland) brought sediment down into England and eventually terrestrial conditions were established (that’s dry land in layman’s terms). By understanding the past environment geologists are able to locate valuable resources such as oil and gold or in Durham’s case, coal! All that from one lick!

So next time you’re out and about and you see a rock, why not lick it? You have no reason not to, you might will enjoy it. Consider keeping one as a pet, take it with you wherever you go and in times of need (for you or your rock), give it a lick!