We Do Need Education: Don’t Scrap the Cap 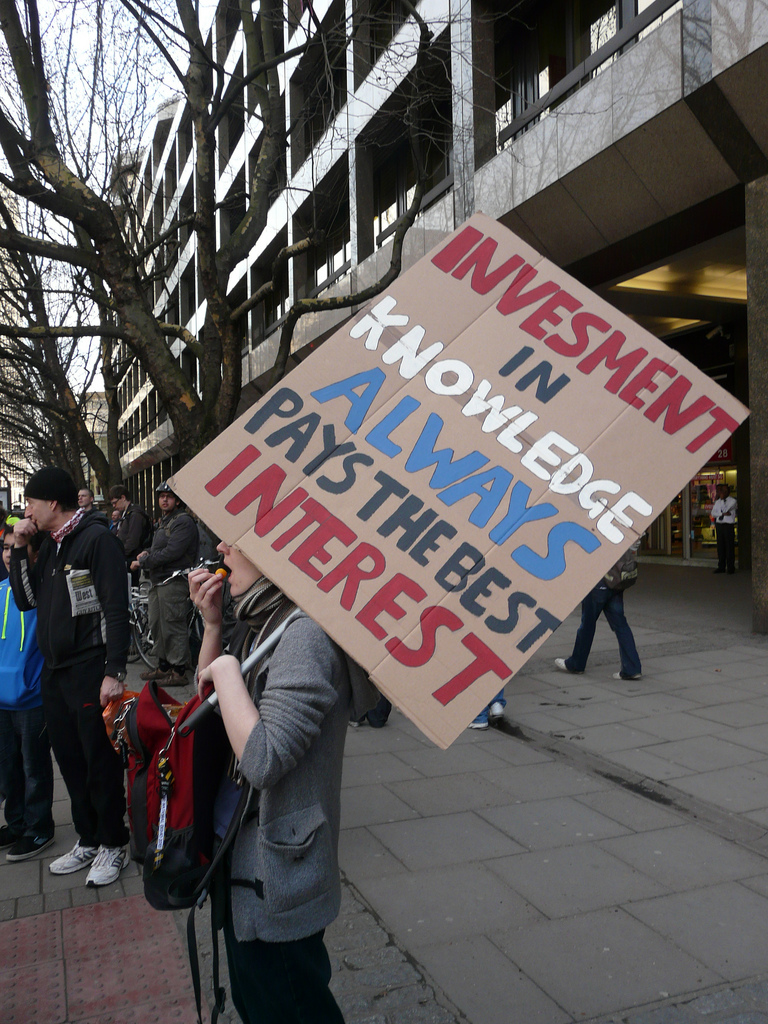 As the title on Flickr has it, hopefully the spelling mistake was supposed to be ironic…

“This House Would Keep The Cap On Tuition Fees”

The proposal stemming from Lord Browne’s review panel (which incidentally consists of numerous university vice chancellors but lacks any form of student representation), that universities should be allowed to charge potentially unlimited tuition fees, and the government’s planned “limitation” of a £9,000 cap on such fees has understandably caused outrage amongst students across the country. While students’ objections from their own personal financial perspectives are obvious, their hostility towards the plans is also well founded on several other grounds.

At present, only 7% of children from families in the lowest social class currently go to university. Any increase in tuition fees will make it even harder for relatively poor families and families supporting more than one child to fund a degree. The raise will widen the already existing divide in access to education based not on individual aptitude or personal merit, but on applicants’ financial capabilities. Not only will some of our best and brightest be unable to access the top educational institutions, because they will be charging the absolute most that they can get away with, but some will be put off entering higher education altogether, a loss both to the individual and to society. Surely access to education should be based on qualitative assessments of merit and not restricted by economic status? Or is knowledge to become just another commodity to be available only to the highest bidder?

Additionally the increased debt that students will inevitably leave university with will be one more hurdle to a generation who are already finding it more difficult than ever to establish themselves in society by getting onto the housing ladder and finding employment in an economy of ever increasing cutbacks.

The often cited justification for such increases in the cost of tuition is that it will facilitate a better quality of education, better prospects for graduates and an overall enhanced experience for university students. However when David Willetts, the Universities Minister, was asked at an NUS conference last year whether he would vote for an increase in fees, he stated that universities had not yet accounted for the additional income they had received as a result of a tripling of tuition fees in 2006, let alone rationalized a case for doing the same again. Research has indeed shown that neither overall student satisfaction nor the quality of education provided has improved over the last four years since that increase. Student-staff ratios have barely improved at all, despite 60% of tuition fee income being spent on salaries. The evidence to back up such an argument this time round then is clearly lacking and should hold little weight.

Another argument that has been put forward is that “good” universities, having more applicants, will be able to charge more while “less good” ones will have an incentive to improve so they can increase the fees they charge. This argument is noticeably flawed. Firstly, the more prestigious universities, who will initially be able to charge more, will have the money available to bring about quality improvements in teaching, research and student welfare. “Less good” universities on the other hand, as a result of not being able to charge as much, will simply not have the funds to improve and compete at a par with the established top universities. Therefore such an idea will not only preserve the perceived divide in the quality of education at different establishments, but promote and entrench it as a reality.

So excessive and potentially discriminating is the proposed increase that students have begun judicial review proceedings against the decision on human rights grounds, arguing that it will penalise students from ethnic minorities who are disproportionately from lower income backgrounds.

Universities have failed to justify the previous rise in tuition fees, let alone make the case for what students will receive in return for this latest increase. The only things that stands to be gained from this escalation of fees is greater, longer lasting student debt and restricted access to education for those, despite any personal merits, who are unable to afford the ever rising cost of knowledge.

Leading the charge for the motion is this year’s President of Cambridge University’s Students’ Union Rahul Mansigani, a former law student at Robinson College. He has taken part in the student protests against the plans to increase fees, and has been interviewed by several news programmes, arguing convincingly and coherently against any the raise. Also in the student’s corner is Aaron Porter, the current President of the NUS, who has led the demonstrations and has also appeared on television to make the case against the rise in fees.

Perhaps this debate is a little late in coming, seeing as the rising tuition fees are now a grim reality for all incoming students in the year 2012/13. The decision has been made, despite considerable protests up and down the country, and we have yet to witness the impact which it will have on young people and graduates. The government has had to make difficult decisions about funding across all sectors, and in doing so, some people were always going to lose out. However, the high-profile riots have proven how unpopular this particular decision has made those in power, particularly Nick Clegg and those Liberal Democrats who promised students before the election to fight to keep tuition fees low.

Education is one place cuts should be avoided at all costs; the cliché that university is an investment in the bright young minds of the future did not come from nowhere. It is very true that any slip in university standards will have damaging repercussions on the country’s economy. Of course coming out of university with upwards of £30,000 of debts is going to make most of us think twice about the value of a degree, especially those of us in disadvantaged circumstances, where a job with the prospect of immediate cash is far more appealing. However, although the circumstances we are currently in are unfortunate, we cannot risk standards in academic institutions falling. Perhaps those who will benefit most from a good degree are the ones upon whom the burden of keeping teaching standards up should fall.

We are lucky that a system of loans and grants exists so that an education at a top university is still practically available to all. While at university, future students will be no worse off than we are, and it is not until they leave that they have to face the prospect of paying debts off. Some would argue that this money and debt is easy to forget about; the monthly sum comes straight out of your pay packet, and if you are unable to get a job, the repayments stop until you have one, and then you pay back a proportion of what you earn. The difference under the new system is that the monthly repayments will perhaps be a little more, or perhaps you will pay them back for a little longer. Although it is dangerous to dismiss the debt, it essentially acts as a tax – a tax which we are already facing even with subsidised fees.

Many students who took part in the riots in London against the fee rises acted like they were being victimised by the government, like they were the only ones who were being remotely affected by the government cuts. This attitude was short-sighted and childish, a knee-jerk reaction to some bad news, which actually was detrimental to their cause. Although they had right to question any government decision, almost all sectors and areas in the country are being affected in some way and are having to deal with decreased government funding. None of these felt the need to smash private property, because they realise that what is happening is an unfortunate product of unstable economic times. Cuts in funding for the NHS and primary schools are perhaps more worthy of kicking up a fuss about. Poor primary and secondary school education is where problems of social mobility ultimately lie, and a fairer system of school education would arguably do more to widen access to the best universities than subsidised tuition fees. However, that is another argument.

Improved standards of teaching at university will hopefully result from students paying high fees. An arts student who currently has six or seven hours of contact time a week can easily feel like their money is paying for library access and little else, especially when lecturers are often more concerned with their own research and work than actually teaching. If students are paying three times as much, negligence or apathy on a lecturer’s part ought not to be tolerated. For those who decide university is still worth the fees, positive things will almost certainly come from their money.

Overall, while students paying high fees is certainly not an ideal situation, we sadly do not live in an ideal world, and we have to make the best of the circumstances we are given. Good skilled graduates will have access to the same jobs and the same opportunities to pay off debts in a manageable way as current ones do. The alternative options to removing the tuition fee cap – that funding is cut and standards slip, or funding is not cut but even more money is taken away from valuable sectors such as healthcare – are arguably even worse than this one.

On the opposition is Baron Tanlaw of Tanlawhill (Simon Mackay), appointed Chancellor of the University of Buckingham (the only private university in Britain) last year. Joining him is the Tim Loughton, Conservative MP for East Worthing & Shoreham and Parliamentary Under Secretary for Children and Young Families.

Come along to the Debating Chamber on Palace Green this Friday at 20:30.