UK vs USA: what you need to know about elections

The Iowa caucus on 1st February was big news; the virtual ‘draw’ between Democrats Sanders and Clinton has dominated headlines, as has Republican Ted Cruz’s victory over rivals Rubio and Trump. However, if this is just one step in the long race to the White House, why has it proved so newsworthy? For one, the US presidential election is quite removed from the process of General Elections in the UK. It’s a contest which takes almost two years to arrive at its resolution. It involves the bemusing Caucus system, which is employed in Iowa and a number of other states, as well as months of strategic campaigning in the swing states. Furthermore, it involves a lot more party division and infighting than is considered the norm in the UK.

Hillary Clinton formally declared her bid to be the Democratic candidate all the way back in April 2015. When America goes to the ballot box to elect their next president on 8th November this year, 576 days will have passed since her announcement. In the UK the ‘long’ campaign season last 139 days, and the ‘short’ campaign, when tight restrictions apply, lasts only 5 weeks. A major reason for this difference is the system by which candidates for President are nominated by their parties. In the UK the public already know the candidates because they publicly lead their parties – but, in the USA, the parties are at war with themselves trying to elect a candidate for the first half of the campaign period. While party divisions in the UK are frowned upon, in the USA they are an accepted part of the battle for candidature.

In the Democratic party, the main two figures of note are Hillary Clinton, former lawyer, First Lady and Secretary of State, and Bernie Sanders, the Brooklyner and formally independent Vermont Senator who self-defines as a socialist. The Republican field is more divided, although coverage of the election by the UK media has focused on Donald Trump, the billionaire business man known for his calls for Muslims to be banned from entering the USA. Ted Cruz, a ‘social conservative’ and former Professor of Law, has had the most consistent campaign with Marco Rubio, an outsider who has recently gained popularity with middle class voters, also joining the field of potential Republican candidates.

Within each state, primaries or caucuses are held to determine how many delegates will be sent to the national convention to elect candidates for the Presidential election. Depending on the state, the winner will either get all of the state’s delegates or they will be divided proportionally. States with a larger population get more delegates than those states with fewer inhabitants.

If a state uses the caucus system then party members meet at lively events to discuss the candidates, debate and choose delegates. The delegates are elected to county conventions, which select state convention delegates who go to the national conventions, where presidential candidates are selected. At some caucuses, people literally vote with their feet when they have been persuaded by an argument, crossing from one side of the room (representing one candidate) to the other (representing the rival candidate).

The alternative system involves primaries where votes are cast in favour of the preferred candidate – this is much more similar to the system of electing your local MP at general election in the UK. Whilst in the UK you elect the party representative with the hope that they will tip the balance in favour of the party at national level, in the US you send the delegates who will vote for your chosen candidate at the national convention.

Cruz won the Iowa caucus for the Republicans with a slight lead on Trump and Rubio – but each took roughly a third of the collective votes so the contest is still unpredictable. In the Democratic camp, predicting Clinton’s victory in Iowa six months ago would have been a safe bet; before the surprising rise of Bernie Sanders. He began as a fairly marginal candidate but is now Clinton’s main rival, winning 49.6% of the vote in Iowa (only 0.3% less than Clinton) and proving that he could have a serious impact on her chances. In this instance, Clinton gets all of the Iowa Democrat state delegates, but if Sanders is victorious elsewhere he may not be far behind. 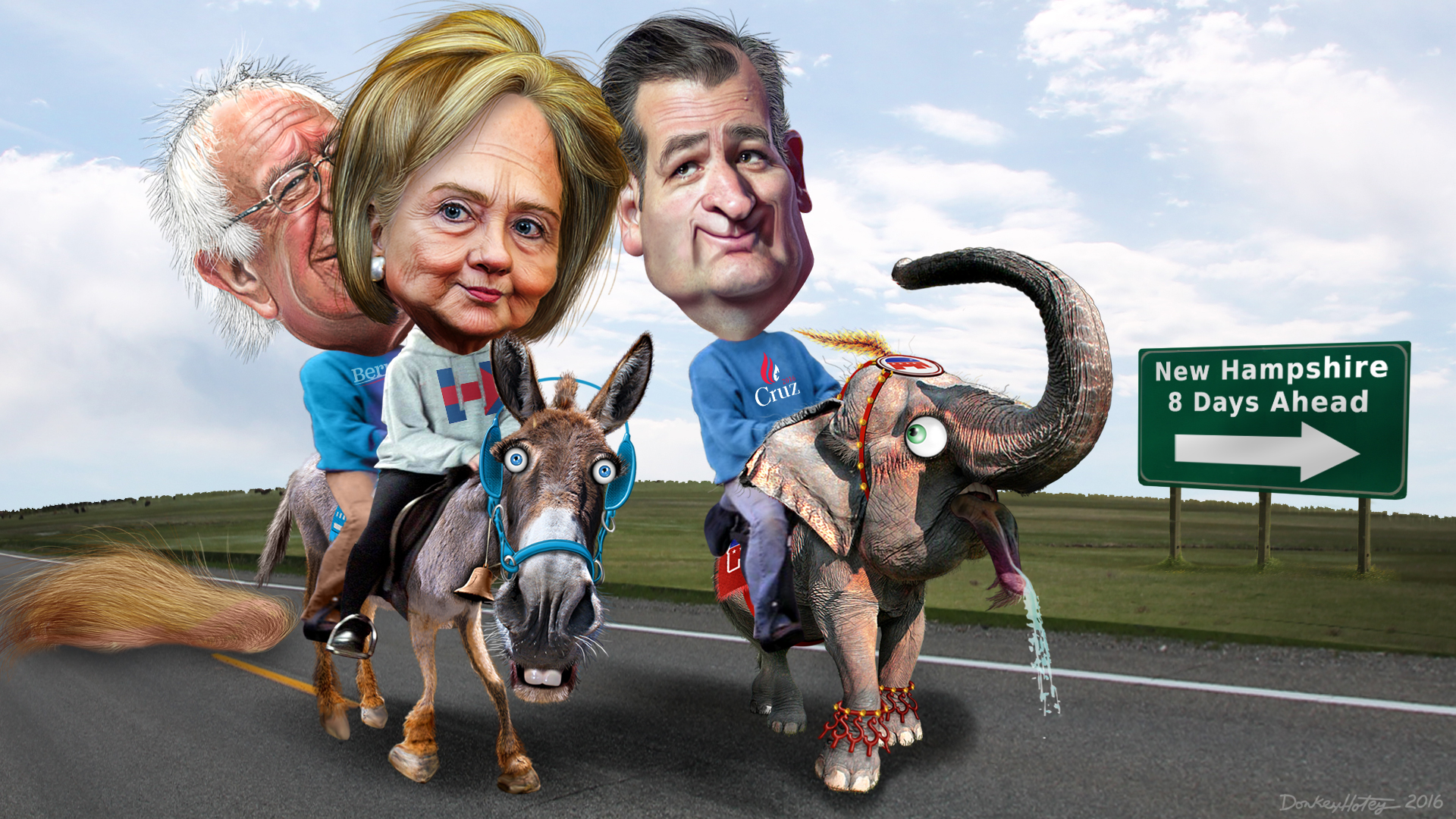 Iowa winners on the road to New Hampshire

The next state contest is the New Hampshire primaries, on the 20th February, and Sanders is expected to do well due to his popularity in the New England states. In the Republican New Hampshire primaries Trump is expected to dominate, with Rubio falling some way behind and Cruz still in single figures (at 7%) in the latest polls. Yet this is to a certain extent immaterial; with 48 states left to elect delegates after New Hampshire, the long campaign for the White House is still in its early stages. Unlike in the UK , where we see would be PMs lead their party, or at least work high up in government for a term, the candidates in the US will have only a few months to campaign on behalf of their party. It won’t be until August that we find out who will be representing both the Democrats and Republicans in the November election.