The Strategic Defence Review – the tip of the iceberg? 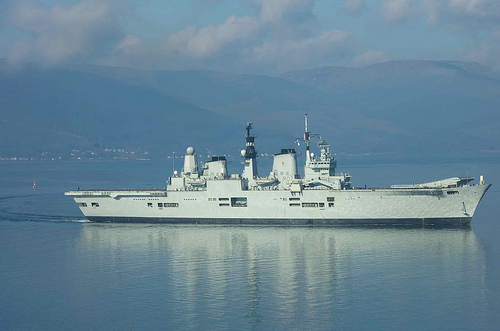 The aircraft carrier HMS Ark Royal has been a casualty of the cuts, with orders for it to be decommissioned immediately

The government has finally announced the decisions of the Strategic Defence and Security Review (SDSR), with assessments ranging from outright denunciation to acknowledgement of its pragmatic necessity. All the obvious questions have been asked – was it necessary? Are the cuts proposed the right ones? Does it go far enough? This article is not attempting to answer these questions.

Instead, it is an attempt to clear up a common misconception – that this review is the final word on changes in the defence sector. What seems to have been largely forgotten is that the SDSR document is not a detailed account of the future of the Armed Forces; in fact, this is just the beginning of an extended process.

True, there have been announcements on the future of big projects – keeping the carriers, scrapping the Harriers and the Ark Royal, the delay on Trident, and so on. The majority of projects, however, were barely touched upon in the review, leading to a lack of clarity on a number of issues. Examples of this include the future of the Army’s Warrior Armoured Personnel Carrier mid-life upgrade (rather a mouthful I know); the extent of cuts to programmes such as the FRES (Future Rapid Effects System) armoured vehicle, and the project to replace the ageing Land Rover with a better model. Likewise, crucial details regarding the decisions just announced have not yet been released – for example, how many JSF fighters will actually be bought? How will the Army, Navy and Air Force reduce man power – will they receive their P45 whilst on operations? What percentage of MoD estate will be sold off?

In reality, the SDSR is a combination of a broad statement of intent and a starting gun for a whole series of mini-reviews which will thrash out the details so lacking in the document itself. Examples include a “Defence Reform Review” to decide on the future of Defence Procurement policy; a “Reserve Forces Review” to assess the long term role of the Territorial Forces, and a “Defence Industrial Strategy Review” to deal with the future relationship between the government and industry. The commencement of “detailed investment appraisals” to decide upon the future of land currently owned by the MoD also highlights the continuing nature of this defence review.

Why then, you ask, has this situation come about? One reason provided by the report is that “current operational requirements” preclude hard and fast decisions being made in areas such as reductions in troop numbers, or the withdrawal of jets like the Tornado from service. There is undeniable merit in this argument, but operational requirements alone cannot justify the sheer lack of detail provided.

Another, more convincing reason is simply the speed at which the SDSR was undertaken. The Defence Reviews of 1998 and 1990 each took a year to complete; this one has taken only half that time, thus limiting the amount of work able to be undertaken. Why was there the demand for such a short time frame?

One possible answer could be that this is a deliberate policy, with decisions split between the overall policy document (the SDSR) and the detailed reviews that are now to be conducted. More likely, however, is that this was not a policy desired by the MoD at all; rather, it was a result of the Treasury attempting to coordinate and expedite the required spending cuts. This is a dangerous precedent for future Defence Reviews, since it demonstrates the extent to which defence policy is being dictated by economic circumstances, rather than operational and strategic requirements.

The SDSR is just one of many reviews. So what? You could potentially argue that a system of rolling defence reviews would be of benefit, ensuring that the Armed Forces are always prepared to fight the war of the day. This, it is reasonable to surmise, is the thinking behind the decision to hold Defence Reviews every five years. There are, however, serious problems with this type of short-term thinking.

In the first instance, it creates a continuing problem of uncertainty within the Armed Forces and the Defence industry. A lack of clarity could lead to paralysis within the arena of defence procurement; it is worth noting that many defence projects take more than a decade to be completed, from their inception to the creation and provision of the equipment. There is also a danger that industry will not invest in new projects, if there is likelihood that a programme or capability will be cut. Obviously this would depend on the size of the firm in question – multinational firms such as BAE Systems, General Dynamics and Lockheed Martin could afford to do so; on the other hand, smaller organisations with smaller profit margins are less likely to. This could have serious ramifications, notably in a progressive stream of job losses and serious damage to local economies. Furthermore, fear over job security could seriously endanger morale within the Armed Forces and the MoD, potentially compromising their ability to perform at the highest level. It also puts unnecessary strain on the families of those serving, thus compounding the problem.

Secondly, this short term thinking considerably strengthens the potential for partisanship in decisions over defence. With the probable onset of fixed-term Parliaments, the time frame for defence reviews will inevitably coincide with that of elections. This in turn could, in the event of a change in government, result in new political priorities being imposed every five years, seriously compromising national security. While we would hope that politicians have more common sense than to needlessly tinker with national security, it is still a serious possibility – witness the attempt of the Thatcher government to sell HMS Invincible to Australia just prior to the invasion of the Falklands!

A rolling defence review is thus not in this country’s interests. It prejudices the security of this nation and places untold stress on the men and women who are supposed to protect us. But what is the alternative? To carry on as before, with strategic reviews held only when deemed politically or economically necessary? This is not a feasible option. Another SDSR dictated by the Treasury would not fill the public with confidence over our future security. The only real option, one could therefore conclude, lies in some form of compromise – full reviews completed in depth once a decade, with assessments regarding the potential threats to the UK every five years. Again, there are problems with such an approach.

The inherently uncertain and constantly changing nature of the threat to the UK leaves us little option but to undertake some sort of “fudge” – the quintessentially British approach to any problem.