The Reality Factor in the TV World

Francine Do Nascimento in UK Politics on 6 February, 2011. 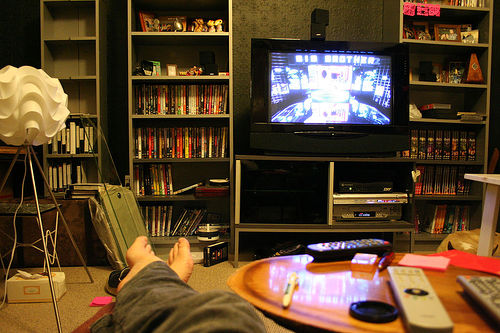 Are we passively accepting rubbish TV instead of demanding programmes with actual content?

Reality TV is a genre that has developed significantly in recent years, with the likes of I’m A Celebrity, Get Me Out Of Here, The X Factor and the infamous Big Brother attracting ever more controversy. These shows have embedded themselves firmly into our Saturday nights and perhaps our national consciousness; and if you own a TV, it is impossible to avoid them. Becoming hit shows, they have raked in millions of pounds for their producers, but are they really of any worth to society in general other than a large wage packet for the few who exploit the market? Reality TV now encompasses a varied range of shows, from America’s Next Top Model to Hell’s Kitchen and thus is a difficult subject to cover, and generalisations are easily made. It now includes celebrity-orientated features and talent shows, some of which are a far cry from the original meaning of the term: unscripted television, undertaken by ordinary people. The term “reality” has become something of a misnomer in recent years, as I’m A Celebrity can hardly purport to mirror reality in any way at all, with post-production teams squeezing in all the sensationalism they can, not found anywhere in our day-to-day lives.

By all means, reality TV shows are entertaining, they make us laugh, cringe, and occasionally feel better about our own lives when we see some poor soul making a fool out of themselves in front of the eyes of millions. However, the question is, are they really a substitute for good quality drama, fascinating documentaries, and modern comedy? Reality TV can be entertaining in a mindless, often crude way: watching the inmates of Big Brother is intermittently funny, yes, but alongside this it is also disheartening. It brings out the worst in its participants: the people caged inside the house are rude, argumentative, foul-mouthed and selfish on a daily basis. Is this the best that society has to offer? Why exactly do we feel drawn to watch such a show? Is it that we get a sense of power over the people who we watch collapse into madness on our screens?

There is little “reality” in these shows, as people couldn’t live healthy lives in anything near a similar fashion. Likewise, what we really love about The X Factor is the scandal, the controversy, the clashes between personalities. Jedward were popular because they upset the status quo; however, they were completely lacking in talent, and have attracted criticism because many believe such shows are beginning to crush those with real musical flair. As well as this, the public voting system has turned into a sham and a popularity contest, rather than a true judgement of those who deserve a record deal. The reasons why we watch all this are broadly the same as the ancient Romans watching the gladiators: we as spectators like watching all the mess and fuss, but would rather it happened to somebody else.

Celebrity-based reality TV is another branch of the same: Hell’s Kitchen, Dancing on Ice and Strictly Come Dancing are some of the more high-profile shows that fall into this category. These differ from programmes like Big Brother, in that a skill is nurtured and developed, and the popularity of some may not be unreasonable – they are shows which function to bring whole families together. It would be unfair to accuse such a mild, family-orientated programme as Strictly Come Dancing of ruining our television experience, and where I begin to take issue is when the light-hearted entertainment disappears in favour of sensationalist, offensive programmes that may provide mindless stimulation, but take up time on our televisions that would be better devoted to a well-crafted, thought-provoking drama, performed and produced by real talent.

The differences between Strictly Come Dancing and other reality television are the values they promote: some unify people, celebrate personal achievement, and are sophisticated, light-hearted family entertainment. The problem lies in the fact that entertainment shows like this sit in a grey area; the term “reality TV” has evolved so much it compasses a hugely diverse range of shows, some more worthy than others. Some would argue that entertainment shows like this are not, in fact, reality TV, and the blurs between the lines are difficult to reconcile.

So the problem many have with reality TV, then, is that many shows which fall under this category have no cultural value, and they make viewers respond to them in a negative, rather than positive way. Some shows make us bond together, to be entertained communally. On the other hand, some “fly on the wall” shows depict selfish people forming destructive relationships, which isn’t entertaining or healthy to watch. They depict and promote insecurity, arrogance, money-motivated behaviour; the people that participate in them often end up famous for all the wrong reasons, devoid of integrity or dignity. Our enjoyment of the shows suggests a distorted value system in the modern world, and the abundance of such shows is worrying. One or two frivolous family shows, with the right values at heart, should be enough for our airwaves; the rest can be binned in favour of more stimulating topics.

Last summer I was staying at a friend’s house for a couple of weeks for commuting reasons. One day when I got back from work she was laying on the couch, watching some TV, and looking extremely bored. I sat next to her and started flipping through the pages of a random magazine, while she started flipping through the channels. After a while, she came across this reality TV show called Rock of Love, in which Bret Michaels, the lead singer of the rock band Poison, would watch this bunch of pierced and tattooed (though not always distastefully) girls who barely ever wore any actual clothes get into the most bitchy, horrendous and over the top catfights over who loved him most. Funnily enough, they had barely spent forty-five minutes put together with him over the course of three weeks, and I swear one of them put raw chicken breast inside another’s pillow at some point. Bret took them on dates to places like lingerie shops or race tracks, and after spending about six minutes talking to them he would proceed to make out with them for about an hour. It was genius. I don’t know if it’s because I was always too tired from work or if it’s because it made me re-live my early teenage years of enjoying Big Brother (probably more because I was finally deemed old enough by my mum to watch it, rather than genuine appreciation of the show) but I don’t think I can name many other occasions in my life when I laughed so much.

Reality TV is almost always funny, that’s the point of it and there is no denying it. The problem is that there are not many people who would openly admit to loving to catch an episode of at least one of many different shows around every now and again. It seems degrading, uncultured, embarrassing to be seen watching something like Big Brother. Yet, there is a reason why that show in particular is still kicking. We love to watch people humiliating themselves, losing every last thread of dignity, and getting aggravated either at a situation or (even more entertaining) at other people, relinquishing all restraint and starting those (in)famous fights that are the topic of the next issue of Heat magazine. We love to watch suffering, it’s in our nature. Ask Hobbes. Or even better: ask all those people who made Jack Ass one of the most viewed and talked about programmes not that long ago. It might not be pretty, but it is downright amusing.

But even if pretty is what you want, reality TV can deliver: Strictly Come Dancing and Dancing on Ice, particularly, will give you all the glittery dresses and graceful movements you want – with some glorious exceptions, such as John Sergeant, of course. Indeed, most people do not seem to have a problem with these shows because they are a kind of reality TV that (usually) does not depend on self-degradation and foul language for its entertainment. However, I would like to see one person who would deny that the highlights of Strictly are Craig Revel Horwood’s blunt, merciless and hilarious comments which often provoke havoc amongst judges, contestants, professional dancers and audience. It is the same humour we get from the brilliant Simon Cowell in The X Factor and Britain’s Got Talent, and it all comes back to human nature.

Some argue that the problem is not reality TV itself but the highly derivative and uncreative programmes that are flooding the channels. After the huge successes of Big Brother and I’m a Celebrity, Get Me Out of Here, viewers were bombarded with cheap copies everywhere, from The Game to an A-Z list of nouns for the qualifier “celebrity”, such as Celebrity Detox Camp and Celebrity Fit Club. They do have a point: just because one format proved popular that does not mean that we want a million derivatives that are essentially the same thing over and over again (though it is interesting that fewer people seem to realize that Apple does exactly the same thing: after the iPod and the Mac, it is all just a list of basically the same product with a few improvements in design, but I digress). Nevertheless, the very fact that TV producers felt compelled to copy these models proves their popularity (even if it backfired). If that was not true, then Sarah Palin would not be shooting a reality TV show about her own life, which some have speculated to be an attempt to boost her public image and aid a possible future presidency campaign.

But let’s forget about the political potential of reality TV for a moment and focus on what the good old straightforward kind is all about: entertainment. Simple as that, it is primarily intended to be funny, distracting and interesting (in one way or another). It helps you relax after a hard day’s work through its simple and easy to follow format. It makes you feel better about yourself in ways that are not always obvious. Besides the whole “wow, and I thought I embarrassed myself last Thursday in Klute” effect, there is also the feeling you get that even if you have spent your entire day handing out flyers for a sale of a high street shop or pretending to do work in the library when actually you were mostly checking Facebook, you have still made a much larger contribution to the general advancement of humanity than those people. This is why my friend and I were absolutely ecstatic when we discovered that it was not enough for VH1 to simply allow those women from Rock of Love to humiliate themselves in international television just to become Bret’s “true love” (funnily enough, this show had about three series). No, they also had to then allow Sharon Osbourne to put them through Rock of Love Charm School, in which they were taught how to behave and lost any remaining dignity they might have had by marching on a beach, chanting: “I need love and I need charm, ’cause Bret Michaels dumped my ass.” Our Wednesday nights were never the same again…

By Francine do Nascimento

The forum is open to all, members and non-members alike. Come along to the Debating Chamber on Palace Green this Friday at 20:30.