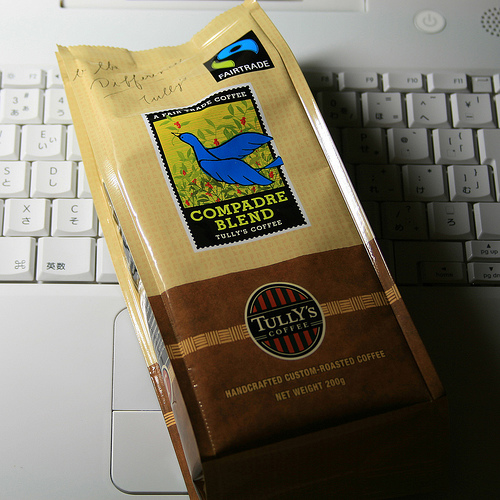 Do we give enough consideration to the cost of not buying Fairtrade produce?

Picture the scene. Tesco. The tea and coffee aisle. You see the massive variety of products. You see the different range of prices. You could have Tetley [tempting…] or Value [just not as tasty…] and then you see the Fairtrade brands. You know that they’re probably more ethical, they probably do some good in the world, but they’re definitely more expensive…

The issue of fair trade raises problems in the trading world. The Fairtrade movement has principles it wants to adhere to; their main concern is to ensure that those who grow products receive a “fair” wage for their produce. However, the very existence of this concept exposes a deeper underlying problem that is often brushed under the carpet – the very fact that this is not standard practice. We cannot buy any product off the shelves knowing (perhaps merely assuming) that those who grew it received any amount of money for their efforts. For humanity to be treated in this way is ridiculous – attention should be paid to something which affects so much of global trade.

Unfortunately in the UK, in a consumer driven culture, we are happy when we see falling prices. However, if we play the “picture yourself in their position” card, we begin to get an idea of what this means for the people in these situations. Imagine your part time job. Imagine a busy Saturday afternoon working in a café, making countless pots of tea, wiping up thousands of crumbs, loading and unloading the dishwasher. Imagine doing this work and not receiving your pay. And the next week, imagine still not receiving your pay. And then, finally, receiving a penny; nowhere near enough money for the amount of work you did, and not really beneficial or useful for that purchase you wanted to make.

This is reality for millions of workers. However, this is not just a Saturday job. This is every day. This is hours upon hours of planting, and sowing, and trying to get by, yet receiving nothing. Simply so that we can receive things for less money and so that companies can increase their profit margins. If this were to happen in the UK, it would be headline news, daily, until something was done. There would be protests, there would be outrage; a government official would probably lose their job. Eventually some sort of agreement would be found or reasoned. Yet, in the countries where we know there are problems, the voice appears to be silent. We do not see protests due to unfair working conditions or hear about strikes for a fair wage. The reality of world trading is that we all know about the injustice, but prefer not to think about it.

This is where the Fairtrade label is not silent. One of their main aims is to campaign for a fair international trading system where everyone receives the right amount of money for their efforts. They have started by developing specific brands which guarantee that their workers will receive a fair wage and have the chance to earn what is rightfully theirs. Today, the FLO [Fairtrade Labelling Organizations International] is working in 25 countries and selling products to 70 countries worldwide.

More recently, we’ve seen the effect Fairtrade is having on the commercial world; in 2009 Cadbury announced that their famous Dairy Milk chocolate would be fairly traded, and since then they’ve placed the logo on their Bournville cocoa, chocolate and Cadbury drinking chocolate. The significance of fair trade is spreading; companies like Cadbury are realising the benefits this has for both the growers of the products and their customers as they can be sure where their produce is coming from.

However, the Fairtrade logo is not always given such a positive image. Many people argue that the issue is ultimately too big for one organisation to tackle, and state that it is only making the problem worse. And therefore, the injustice between non fairly trading farmers and fairly trading farmers will only increase. Others argue that the actual percentage of money going to Fairtrade farmers does not justify spending the extra money in a supermarket. And then there is one of the main problems – that we as purchasers want the best value for money, and when there are cheaper products available, why would we spend more?

Realistically, the problem is not one that can simply be solved by purchasing Fairtrade products. Other brands will not suffer because of the small proportion of Fairtrade buyers in our country. However, what is significant are the principles behind Fairtrade and our reasoning for buying products that are ethically sourced. By purchasing Fairtrade items when we have the option to do so, we are supporting a cause that seeks to give people the money they deserve for the work they are doing. We are, in effect, supporting a charity and simultaneously receiving a product which we can be sure has benefited somebody, somewhere in the world. If fairly traded products increased steadily in sales, eventually the government would have to sit up and take notice. This is the aim of Fairtrade; that by persistent growth and awareness, the world might realise the significance of giving people what they should receive.

So what does this mean for us as students in Durham? Interestingly, Fairtrade has significance to us; Richard Adams who founded the UK Tearcraft and Traidcraft movements, studied at St John’s. Durham University has also been accredited by the Fairtrade organisation since 2007. However, this does not mean we can be complacent in our purchasing. Fair trade is something which requires attention in order for changes to be made. This means for each of us that we should think twice about what we buy. Are we really too poor to support a brand that assists people across the world? Perhaps we should see what we can do to help the world and its people, as many small changes could result in greater ones elsewhere.