The Lib–Con Pact – a permanent feature of UK politics? 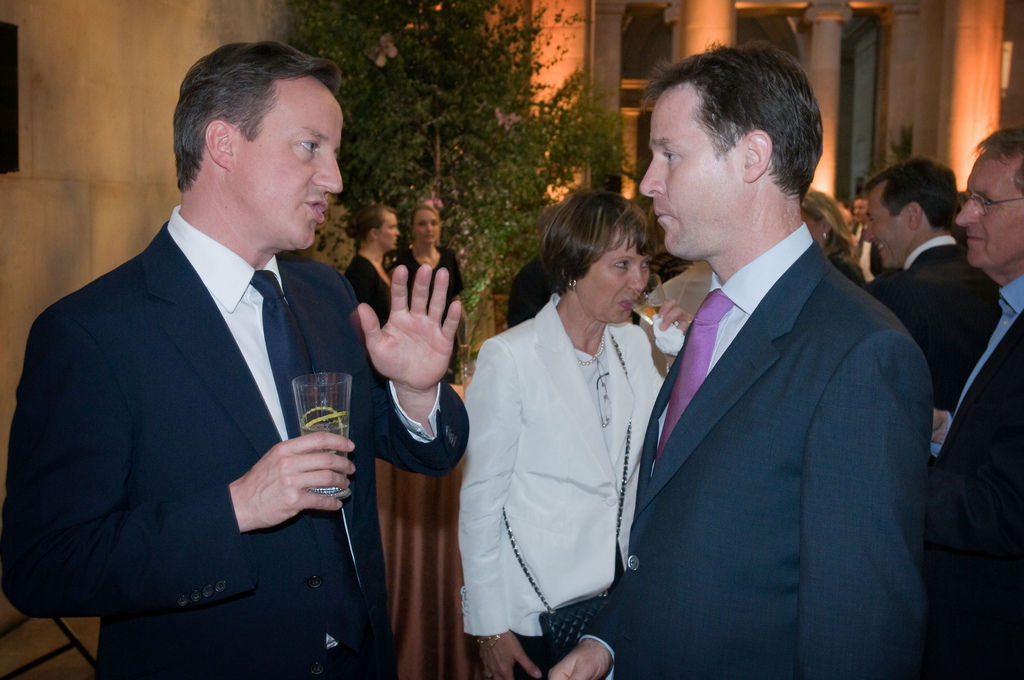 It’s nine a.m. on Friday, May 8, 2015. All the political anoraks are in bed now, having been soothed until the early hours by the dulcet tones of Messrs. Vine and Paxman. A man steps out of car in Downing Street; a speech is given. Ed Miliband gives a final wave to the crowds, then walks through the famous black door of Number Ten. The Coalition may still have been popular, but that did not prevent Labour from coming through the middle and winning a 1997-style landslide.

Plausible? It’s happened before. In 1983, the SDP-Liberal Alliance – the germ of what would become the Liberal Democrats – were only two percentage points behind Labour. Opposition to the Government was split, leading to Mrs. Thatcher winning a parliamentary majority of 144. It would be fourteen more years until the Conservatives lost a general election.

For the nature of our first-past-the-post electoral system is that it rewards unity. The SDP, as a breakaway Labour group, would obviously have preferred Michael Foot’s party to have won more seat that Thatcher’s, even if they were not that keen on Foot himself being Prime Minister. Yet as the system assumes that all candidates are equally abhorrent to each other, it rewarded the united one. It matches Thatcher’s ideals exactly, favouring conviction at the expense of consensus.

For the left to defeat Maggie in 1983, the obvious solution would have been to have a Lib-Lab pact; the parties had already shown a willingness to work together in 1977–8, albeit with a far more centrist Labour leader. And so in 2015, with both Coalition parties led by centrists, the obvious solution would be for there to a Lib-Con electoral pact. That is, for Conservatives to step aside in seats which the Lib Dems have more chance of winning, and vice versa.

Nick Boles, the Conservative MP for Grantham and Stamford, caused consternation on both sides when he suggested as such in his new book, Which Way’s Up?. Nadine Dorries, never one to shy away from controversy, said that she would “rather die” than accept an electoral agreement. She wouldn’t really, of course, as time will tell; unless one of Macmillan’s “events” intervenes, an electoral pact is inevitable mathematically.

At this May’s election, the Conservatives won 306 seats, Labour 258, and the Lib Dems 57. The only conceivable outcomes of this were a Conservative minority government, entailing another election in a few months, or a Lib Dem-Conservative coalition. Cameron opted for the latter, giving his government a comfortable majority of 76. But if the last election had instead been fought with joint Coalition candidates – notwithstanding the fact that the Coalition didn’t exist yet – the Liberals and Conservatives together would have had a majority of 320. Labour would have fewer than 150 seats, being confined to their urban heartlands.

This of course assumes that Lib Dems would rather vote for a Coalition Conservative over a Labour candidate. The conventional wisdom has been that the yellows have been roughly split 2:1 between the reds and the blues, when forced to choose one of the other sides. At the next election, that’s likely to be more even, or even reversed, as tribal loyalties lead Lib Dems to support the Government. Yet even if two-thirds of Lib Dems in Conservative seats vote Labour, the Coalition would still have a majority of over sixty, with its Liberal component increasing by over 30 Members. The Tories and Liberals remain in power comfortably; everybody wins. Except Labour.

And what would happen in the long term – a formal merger? One of the reasons for the Conservative Party’s historical success is its willingness to absorb other movements and ideas. The Liberal Unionists, for instance, split from their parent party over the issue of Irish Home Rule. By the time of Oscar Wilde’s The Importance of Being Earnest, we are told that “they count as Tories. They dine with us. Or come in the evening, at any rate.” Likewise, one is more likely to find a Gladstonian Liberal in the Conservative Party than any other. The 1874 and 1880 general elections, in which Gladstone and Disraeli faced each other, would nowadays be contests between two halves of the Conservative Party.

The key difference between the two historical factions was their attitude to political reform. The rise of a strongly ideological Labour Party around the turn of the century shifted the terms of the debate. But Disraeli – by bringing about the inevitable on his own terms, as with the extension of the franchise in 1867 – had to an extent done this already. With the Conservatives now Whiggish, the Liberals lost their unique selling point; they were forced to move leftwards into Labour’s territory, with Lloyd George’s “People’s Budget”, and the Parliament Act of 1911.

The modern Lib Dems have likewise lost their selling points; by being included in the Government, they can no longer be a protest party. Their key features now seem to be an electorally poisonous Eurofanaticism, and a belief in electoral reform, a subject of interest only to political obsessives. Like the Conservatives, they are broadly a non-ideological party; the word “liberal”, along with the present buzz-word “fair”, can be used to describe virtually any political view. The main difference between the Coalition partners is not policy – vide the ease with which the Agreement was drawn up – but the demographics of the membership.

It is hardly any great revelation that politics is tribal. The Conservatives’ time in the wilderness after 1997 was mostly due to their public image, rather than their policies or personalities. Opinion polls regularly showed that the public were less likely to support an idea if they knew it was a Tory one. Blair, while not a Conservative, was not terribly far removed from one. Perhaps in time these barriers can be overcome, leading to a hybrid political creature wearing both tweed and sandals.

One hindrance to an electoral pact would be the passing of the referendum on the Alternative Vote. But the odds seem against this: even Nick Clegg called it a “miserable little compromise”, and the farce surrounding Ed Miliband’s anti-democratic election is a powerful argument against the system. The biggest threat to a merger is the failure of the Coalition itself, but not even Simon Hughes would dare bring down the first Whig government since before the Great War.

It’s an odd feeling to reflect that you’re living in an historical “period”. In two hundred years, historians will still be writing dissertations either praising or excoriating Nick Clegg. Much is said by the Coalition about effecting lasting change to the country; their real challenge is to ensure that yellow remains entwined with blue, to the permanent benefit of both.