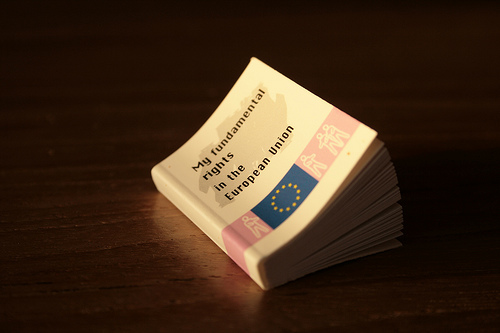 The EU is responsible for most of the rights conferred to workers in the UK, and by being part of it we can ensure our opinion is heard worldwide.

The UK’s position in relation to the European Union (EU) has caused political controversy for many years, and rightly so. The arguments both for and against are compelling and Friday’s debate promises to be one of the most highly contested and relevant debates of this term. But before we consider the arguments for and against continued involvement in the EU, we must first answer the basic questions: what is the EU? And what does it do?

The EU as it stands today comprises 27 member states, located primarily, but not exclusively, in Europe. It was established by the Treaty of Maastricht in 1993, a rebranding and reorganisation of the European Community (EC) upon which it was based. The EC was established post WW2 between only six countries. It was an attempt to prevent another World War not, as one might expect, by trying to isolate and individualise countries, but by endeavouring to lock them together in economic cooperation and trade. The idea was to make the states of Europe interdependent for resources, initially coal and steel, and thus make war, in the words of one of its pioneers, “not only unthinkable, but materially impossible”.

At its heart, the EU intended to establish a Common Market, the free movement of goods, services, people and capital between member states. But it is increasingly becoming a greater political (as opposed to merely economic) force as well as taking on a much increased moral aspect with the advance of, among other things, common foreign and security policy and human rights obligations.

So now let us consider the question at hand by hearing first the benefits of the UK’s continued membership.

One of the main advantages of membership, which has already been alluded to, is that of the common market, allowing the free movement of goods, services, workers and capital between member states. Goods imported from another EU state cannot be subject to customs duties, quotas or other forms of tariff. EU citizens can move freely between states to live, work and study. However countries outside the EU do not have access to such advantages. Any goods imported into the EU will be subject to a common external tariff, making them either more expensive than competing internal products or less profitable for the external seller. 50% of the UK’s trade is with countries in the EU, and 80% of our top trading partners are EU countries. Withdrawal from the EU could endanger these trade relationships. UK goods would become more expensive in the EU and EU imports would become more expensive for consumers on the street.

Another important but less frequently cited disadvantage of leaving the EU, which is also tied to the access to the common market that membership entitles us to, is the effect on domestic employment. Global and transnational companies, those with manufacturing plants and / or outlets in more than one company, deliberately choose to locate plants in EU states specifically for the benefits described above in relation to having access to the single market. It is estimated that 3 million people in the UK would lose their jobs if these companies withdrew their factories, plants and business from the UK.

Aside from the economic advantages of EU membership, regard must also be had to the social and moral influences that the EU has brought with it. The expansion of the EU’s aims into the realms of environmental policy, social equality and human rights, to name but a few, has brought greater protection and awareness of these issues. Take the environment as an example. Stricter environmental regulations and international pressure to improve the ecological situation has allowed for actual progress in this area. A single country alone may find it hard to make a real difference, but 27 acting together have collective power not only to improve their own policy but to influence the rest of the world to act on such issues as well. The EU has also provided greater protection and rights for workers than the British government would have instigated itself.

But for all these advantages, remaining in the EU is not without its drawbacks. Could it be that the costs, both economically and politically now outweigh the benefits of continued membership?

The economic advantages may not be as good as we are led to believe. The UK contributes around £25 billion per year to the EU and many claim this would be better spent elsewhere. For all our financial investment, it is difficult to see the return that we are getting. In 2006, 45% of the EU’s budget was spent on its Agricultural Policy, an industry which employs only 5% of EU citizens. Although much of our trade may be with EU countries, in reality only 16% of our exports go to EU countries. We are importing much more from the EU than we are exporting to them. Were we to leave, we would be free to negotiate our own trade with countries outside the EU and would of course still be able to trade with the EU. This would give us much more freedom to trade with countries of our choice.

There are also great concerns to be raised in relation to the status of EU law in our domestic legal system. While the situation is still somewhat complicated, effectively laws passed by the EU supersede our own laws as passed by our elected Parliament. The democratic foundations of our society rest, and have so rested since the civil war, on Parliament being our democratically elected and sovereign law-maker. We as the people have the power to remove those who make our laws and replace them with majority-approved, elected representatives. This is not the case with the EU, where the best we can do is to elect our European Parliament representative. Many argue that we should regain the ability to decide our own laws and govern ourselves and reclaim the democracy that the UK has fought for and holds so high by removing ourselves from under the thumb of the EU.

Counter arguments can also be asserted to the claims that leaving the EU would cause mass unemployment. It should be remembered that the common market allows the free movement of workers between member states. This has led to an influx of workers coming to the UK from less economically developed states that have recently joined the EU. While the location of transnational companies in the UK may be providing jobs, the huge influx of new workers has outweighed any benefit that might have come from this. It is also unlikely that should the UK leave the EU all the transnational companies will go through the trouble and expense of completely relocating their plants to EU countries. It should be remembered that they will still have access to the UK market by remaining in the UK, and to the trade agreements that the UK pursues outside of the EU. The UK also offers significant other incentives to attract transnational companies to locate here; access to the EU market is only one factor.

Leading out for the proposition this Friday is Viscount Monckton, a hereditary peer and former member of the Conservative Party, He is now deputy leader of the UK Independence Party and has been an advocate of Euroscepticism for many years. Next up will be Lindsay Jenkins, an investigative author and journalist. She is leader of the “Better Off Out Campaign” and has dedicated years of research to exposing the rising power of the EU and the waning power of the member states. The final speaker for the proposition will be Simon Richards, director of the Freedom Association group which, in the words of its founder, Norris McWhirter, campaigns “for limited government and the fundamental freedoms essential to the maintenance of a humane and civilised society.”

Hoping to win us round and counter argue, the first speaker for the opposition is Chris Bryant, a Labour Party MP and the former Minister of State for Europe. Also speaking is Hugo Charlton, a practising barrister and human rights lawyer who has taken cases to the European Court of Human Rights. In 1994 he was the candidate for Surrey in the European Elections. The final speaker for the opposition is yet to be confirmed.*

The arguments outlined above are but a flavour of the pros and cons of a continued UK integration in the European Union. The influence of the EU has likely affected us all already whether we realise it or not. From the prices we pay for food and goods to the conditions under which we work, the growing scope and influence of the EU is reaching into every corner of our ordinary lives more than ever before, making this debate one of the most individually important and personally significant. To challenge our big-hitting speakers this week with your questions and hear what promises to be a stimulating debate, get down to the debating chamber on Palace Green this Friday, 26th November, at 8.30 pm and have your say. This is one not to be missed.

* The third speaker for the opposition had not been confirmed by the time this article was published.