The ‘doublethink’ of Warsi’s rhetoric 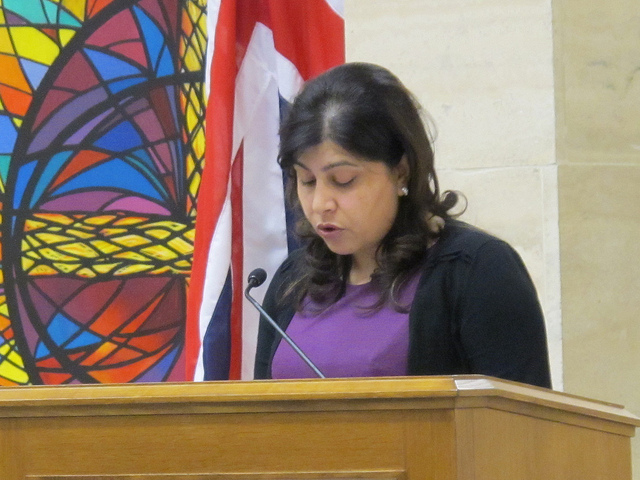 On the surface, Sayeeda Warsi’s recent comments regarding secular society can strike the casual onlooker as a mere instance of the (somewhat tedious) whining we’ve come to expect from ‘small c’ religious conservatives in this country. After attending a recent student-led debate, however, I was struck by a rather disturbing attitude that seems to have developed on the British campus.

Once a series of short speeches from the panel had been concluded, questions and commentary were taken from the floor and what was said by otherwise intelligent and talented young men and women, in my opinion, would fill even the most complacent liberal with angst. Leaving aside the fact that one panellist had described communist China as the most secular nation on earth, the mood of what most students had to say on the matter was best summed up as either balls-to-the-wall cynicism, or a bleeding heart for the poor, old, marginalised Christian establishment. One young man asserted that the attempt to keep the state and its coercive powers neutral in disputes over faith was ultimately futile, and found himself met with a round of applause so enthused as to border on whooping (three cheers for sectarianism anyone?). A young woman reminded the chamber that, after all, a seventy per cent majority had declared themselves Christian in the last census, with a tone that was so matter-of-fact that it seemed to say “bend over and take the democracy, heathens!”.

One rather bizarre speculation was the idea that religious buildings may be under threat from the “secular force” of tourism. My feeling about all this is that there is something more going on here than simple ignorance of what the word “secular” means; the mood in that room got pretty tense at times, even after a number of us had made clear just what is meant by the term. Somewhere along the line, it seems, these people have been taught enough mental acrobatics to fear their own liberty.

I assure you that I make the above reference not to be inappropriately hyperbolic; the novel’s exploration of language and politics simply serves as a useful starting point from which to critique much of what is said about secularism. What Orwell demonstrates here, and throughout Nineteen Eighty-Four, is how those who seek to intrude upon the exercise of power where it has no right to extend, particularly when seeking to coerce the mental life of an individual, allow themselves the space to do so through an attack on words and their meaning. The idea of loving someone you also fear, for example, is a contradiction in terms, given the strict definitions of those words. Yet, I hope, you can easily see how rhetoric that sees no such contradiction has allowed despots to assume positions of absolute authority in their societies throughout history. With regards to how a lot of the English-speaking world talks about secularism, I fear we’ve accepted a contradiction that someone somewhere will take advantage of (if they aren’t already doing so). By no mere coincidence, I suspect, it’s almost exactly the same contradiction offered to the people of Airstrip One by the Party in the phrase “FREEDOM IS SLAVERY”.

To clarify fully what is meant by political secularism, I feel it is best to look at Thomas Jefferson’s and James Madison’s First Amendment to the US Constitution (particularly apt considering that many of the British North American colonies that eventually formed the USA were settled by men and women hoping to escape the religious persecution of seventeenth-century Europe):

“Congress shall make no law respecting an establishment of religion, or prohibiting the free exercise thereof; or abridging the freedom of speech, or of the press; or the right of the people to peaceably assemble, and to petition the government for a redress of grievances.”

Jefferson’s Virginia Statute for Religious Tolerance is similarly excellent on this point:

“Be it enacted by General Assembly that no man shall be compelled to frequent or support any religious worship, place, or ministry whatsoever, nor shall be enforced, restrained, molested, or brutalised in his body or goods, nor shall otherwise suffer on account of his religious opinions or belief, but that all men shall be free to profess, and by argument to maintain, their opinions in matters of Religion, and that the same shall in no wise diminish, enlarge or affect their civil capacities.”

The emphasis in both of these texts, I hope you’ll notice, is on prohibiting the state’s power to impinge upon an individual’s right to believe what they want. A necessary measure to safeguard this right is to prohibit the institutions and clergy of any faith from gaining power over state institutions or from representing the state in any official capacity. To allow this would run the risk of involving the state’s coercive powers in arguments concerning faith – an unacceptable threat to the individual’s rights. In simple terms, secularism is the bedrock guarantee for all individuals within a state that they may live without fear of persecution for their opinions regarding faith.

Warsi’s comparison of secularism to “totalitarian regimes”, therefore, is a perversion of language that warrants comparison to the Party’s “FREEDOM IS SLAVERY”. Unless she’s happy to concede that she’s merely demonstrating a truly cretinous grasp of the language she’s speaking, her comments should be treated with the utmost contempt, even suspicion. (Incidentally, her talk of a “right to a religious identity”, rather than belief, further demonstrates, I would argue, how identity politics has merely served to undermine the status of the individual in society).

The ludicrousness of what she has said is further enhanced by the context in which she has said it. She speaks, after all, in the United Kingdom, where the head of the Church of England is also the head of the state, as well as the police and the military (those coercive forces I spoke of earlier). As regards to the Lords Spiritual, it’s worth bearing in mind that the only other country to offer the clergy a comparable level of access to the workings of power is the Islamic Republic of Iran (I’d urge any of my countrymen and women reading this to ask themselves whether a situation where such a comparison can be made is befitting of the real values of our nation).

I have, of course, no real concern that the likes of Warsi intend to bring us closer to a situation like that which faces our brothers and sisters in Iran. Even if we fail to express such values through our institutions, our culture is so deeply liberal and secular in practice, that people like this really don’t scare me in any case. I’m simply suspicious of those faithful who, despite such privileges that they enjoy in this country, insist on expressing such a sickening pity for themselves. I also worry that when I see young men and women, whose educations and lifestyles depend upon values such as secularism, accepting Warsi’s rhetoric and conflating such liberties with some imagined attempt to coerce their private beliefs, that English liberalism has developed certain weaknesses that could be easily exploited by those who truly do want to control what goes on in your head – and, trust me, there are plenty of them out there. Linguistic confusion of the magnitude that I’ve related here, as Orwell’s Nineteen Eighty-Four demonstrates, benefits only those who wish you the utmost harm.

This article was first published on Toby Weighman’s blog.