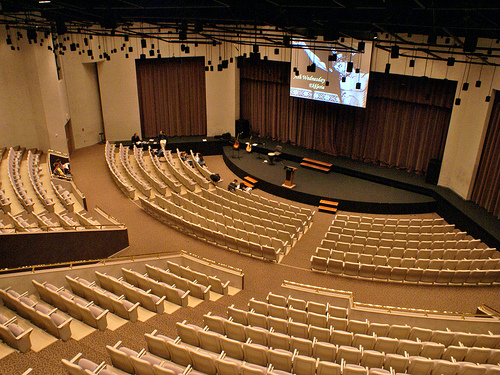 Will lecture theatres be empty after the massive hike in university fees?

You may have resigned yourself to reading a 1,000 word anti-rah rant after reading the title of this article but even in our bubble, national politics remains slightly more important than a debate over whether or not it is acceptable to go to an afternoon lecture in your pyjamas.

Shockingly, it hasn’t been slightly tipsy blonde girls denouncing the intellectual capabilities of poorer students, but the people who claim to represent these disadvantaged children: the NUS, The Helena Kennedy Foundation (which aims to increase social mobility, and has ex-NUS President Wes Streeting as its Chief Executive) and the TUC have all issued statements warning of a return to universities being the preserve of the rich if Lord Browne’s recommendations are implemented.

The Vice Chancellor of UEL has even suggested that implementing the proposals would be a direct attack on the life chances of ethnic minority students. It is impossible to believe that Patrick McGhee is suggesting that non-white students are automatically programmed to choose the cheapest option available to them.

Since disproportionate numbers of ethnic minority students come from low income families, it appears that the Vice Chancellor is joining hundreds of critics in making a sweeping attack on the idea of higher fees, rather than commenting on the specific proposals of the Review and assessing Browne’s ideas for what they actually are, not the ideology they stem from.

The unsustainable abuse of buzzwords such as progressive and social mobility has also obscured the Browne Review’s publication, as the media’s focus has been drawn away from a simple debate on whose responsibility it is to pay for Higher Education, and become transfixed on theoretical models of interest repayments in a bid to assess the elusive progressiveness of each leaked proposal. In the run up to the funding review, progressive was taken to mean ensuring that students who wish to go into valuable yet not extraordinarily well-paid careers such as teaching were not deterred from doing so by fee repayment plans, an aim which few people would criticise. Yet the media and politicians clamouring attempts to analyse every letter of the Review has distorted these ideals beyond all recognition, resulting in the daily publication of sensationalist articles and speculative claims that the highest-earning graduates would repay many times the cost of their degree a particularly surprising claim during a Conservative majority Government. The past few weeks have even seen a quite hilarious assertion by the Telegraph that doctors earn little until they establish a private practice, which seemed to suggest that the £75,000 minimum salary of NHS consultants was, like the salary of teachers, too low to encourage students to pursue their dream career.

Equally ignorant, yet much more damaging, has been the creation of another buzzword (well, buzz phrase) ability to pay.

This phrase has been used in the vast majority of arguments against a rise in tuition fees, with the NUS in particular stating that increased fees would result in universities selecting students based on their ability to pay. Having read the Browne Review, and then re-read it just to make sure I hadn’t missed a hidden proposal to rank students on the basis of their parents incomes (I hadn’t), I am left wondering just where critics of the Review are getting their information from. The report clearly advocates the Government continuing to provide full loans to all full-time students, and even proposes extending support to part-time students (many of whom, incidentally, are from low-income backgrounds). Browne suggests raising the income threshold at which graduates start to repay their loans to £21,000 near enough the average graduate starting salary and stopping repayments and interest accruing on the loans of graduates earning under this salary.

Even once a graduate’s salary reaches the £21,000 mark, the treasury will only reclaim 9% of their earnings over this limit so a low-paid teaching assistant would still repay much less per week than the iconic city bankers cited in every mathematical model of repayments. Whether you agree with students funding their own education or not, it is impossible to deny that the complete lack of upfront fees and the provision of loans to every student could create a situation where a student from a low income family would not have the ability to pay for their degree (providing, of course, that student finance are not still waiting for new scanners to process students’ documentation).

It is of course true that some students will have their fees paid for by parents and will thus graduate with no debt, but this is unavoidable, even if a graduate tax was introduced: said students could just apply as international students, pay the unsubsidised fees and then proceed to avoid such a graduate tax completely.

The generosity of a relatively low number of parents is not a force which can be prevented, and designing a fee system purely to limit the number of students without debt is surely a farcical and invidious task which does not benefit poorer students in any way.

If headline-seeking phrases are removed from the debate, it becomes clear that the underlying assumption is that these poorer students would not be excluded from the “best” universities by their ability to pay, but by a fear of debt. Although UCAS data from previous admissions cycles shows that the advent of tuition fees actually led to an increase in applications from students with parents in the lowest socio-economic brackets and a decrease in applications from students with high-earning parents, it is conceivable that all students will question whether it is worth paying higher fees for universities such as Durham.

However, in an increasingly competitive graduate employment market saturated with 2.1-transcript waving jobseekers, it is rapidly becoming clear that students’ choice of university is only increasing in importance. It has never been a secret that Investment Banks and Consulting firms recruit almost exclusively from Top 10 Universities (BCG for example only visited 4 universities this year), but research consistently shows that students from less privileged backgrounds are far less likely to consider the career implications of their choice of university – or realise that their choice is constrained by the softness of their A-level choices than their counterparts who have received consistent careers advice for much of their school lives.

The importance of clear, honest careers advice in improving the prospects of disadvantaged students should not be underestimated, even in an era of austerity.

Small investments in careers advisors for all schools could be much more effective than Nick Clegg’s attempt to bribe top universities to accept more poor pupils with £2,000 fairness premiums, and have the added bonus of improving students’ employability by teaching them to match their skills to potential careers. Undertaking a realistic assessment of your graduate prospects and the enjoyment studying will give you before you start your degree is the only way to make an informed decision about applying to university, and if any student realises after assessing their options that it’s not worth it for them, they’re probably cleverer than the rest of us.