Shamima Begum: A Complex Woman Living in a Complex World 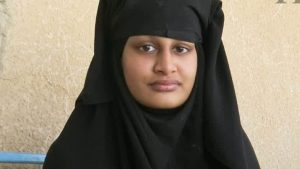 Shamima Begum is a very interesting character. She is both a young, indoctrinated girl and an ignorant, Jihadi bride who feels little regret for her actions. I feel drawn to her life and this story because it brings up a myriad of complex and opinion-inducing ideas. Ideas about extremism, education, ISIS, justice and nationalism. She represents the modern political conflict over identity, belonging and citizenship.

All of these ideas are highly contentious. We all have opinions on them for they have changed the way we look at Britain and the world. It seems that all political actions can be related in many ways. Everything- whether it be the resurgence of the far right, climate change policies, our social media- seems to come back to the idea of polarisation. We feel polarised by each other perhaps more than ever before. We are quick to assign ourselves groups and define our way of life. This polarisation can force people to jump to hasty conclusions, such as with Begum, leading to stupid decisions and ill effects.

What scares me most about Shamima’s story is the unusual perception she holds of her experiences. I am the same age as Shamima. I grew up in the post-9/11 world of fear. My school implemented a terrorist alarm, my friends feared going into cities and I was convinced that there would be a bomb on my first plane journey. I grew up understanding terrorism and how it threatened the democratic way of life I hold so dear. What I find so interesting is that Shamima did not hold this same view. She did not instantly rebuke IS.

Shamima, insanely, saw the Islamic State as offering her a better life, a life where people would ‘take care of you’. Most media outlets are not covering why she felt this way; why did Shamima think an authoritarian regime would give her a better life than a developed democracy? We know little of her life. But, one telling factor of her decision was that it was made with friends. It was like an adventure, a holiday. She did not see it as wrong.

Shamima was indoctrinated. Her friend Sharmeena left for Syria two months before she and her two friends- Amira Abase and Kadiza Sultana- took the same journey. It has been argued that Sharmeena persuaded them into going. Shamima also says that the IS propaganda videos were deeply influential in her decision. They showed an “Islamic Disneyland” supposedly.

But, how far was this indoctrination the cause of her actions? Shamima may have been an innocent 15 year old whose dedication to religion took a wrong turn and was abused by those she loved. Yet, there is the possibility that Shamima is just a “bad” person whose ideology stands at odds with morality.

The reason why it is difficult to pin her down is because she consistently contradicts herself. She has said confidently that she “knew about those things (the brutal behaviour of IS) and I was ok with it”. Yet, in almost the same breath she asserts that “I didn’t know what I was getting into when I left”. We do not know her intentions, we do not know how she felt and we do not know her true opinion on ISIS. Perhaps instead of suggesting that Shamima is therefore a manipulative person, we come to the conclusion that she doesn’t actually know. Shamima, in these interviews, has just given birth. She has been starving and alone. She lives in the Al Hol camp which is full of IS supporters. Moreover, Shamima has lived under the Islamic State for four years. She does not even know what Britain has become. Shamima is a mother yet hasn’t seen her mother since she was a teenager.

Yet her opinions are still heavily problematic. It seems she only left IS because of its unstable state and her son’s safety, not because she realised that what they were doing was wrong. Her assertion that she did nothing dangerous because she was simply a “housewife” and never intended to become a poster girl for IS shows her ignorance. She speaks of IS like it were a group of friends she sneakily ran away with. Most chillingly of all, for this, she thinks “a lot of people should have sympathy” for her. No doubt, Shamima has lived a hard life, but her inability to feel remorse for her actions is startling. In her BBC interview specifically her demeanour is incredible. When asked about the Manchester bombings and how children were killed her reply is “ok yeah I am sorry”. She appears to have little humanity.

However, the main question is whether she should be allowed back in Britain. The Home Secretary, Sajid Javid, has just revoked her citizenship. Even though this can only be done to a citizen if they are eligible for citizenship elsewhere, I still believe that this decision is wrong. In order to show how abominable the Islamic State is, we must show the virtue and liberty that countries like the UK are based on. Shamima deserves a trial, not a dictation. Also, I believe that Shamima should have some kind of punishment- whether formal or educational. If she is not a British citizen, she cannot face our rule of law. Moreover, we must show the world that we will never stoop to the level of extremists; she grew up as a citizen of our country and thus has rights. If she doesn’t come home, where else will she go? She could stay in the camp, be more heavily indoctrinated, and support ISIS once more, with her child following suit. We must face the problems that we have, not run away from them.

Shamima’s story is abnormal but it is not unique. This will happen again and again and again. As a country, we cannot put up walls and shy away from our globalised world. We need to be open about discussing the problems we face. It seems, Shamima Begum has highlighted important aspects of our British political reasoning and the role of identity in our society. She should not be praised, but her story must not be muted.