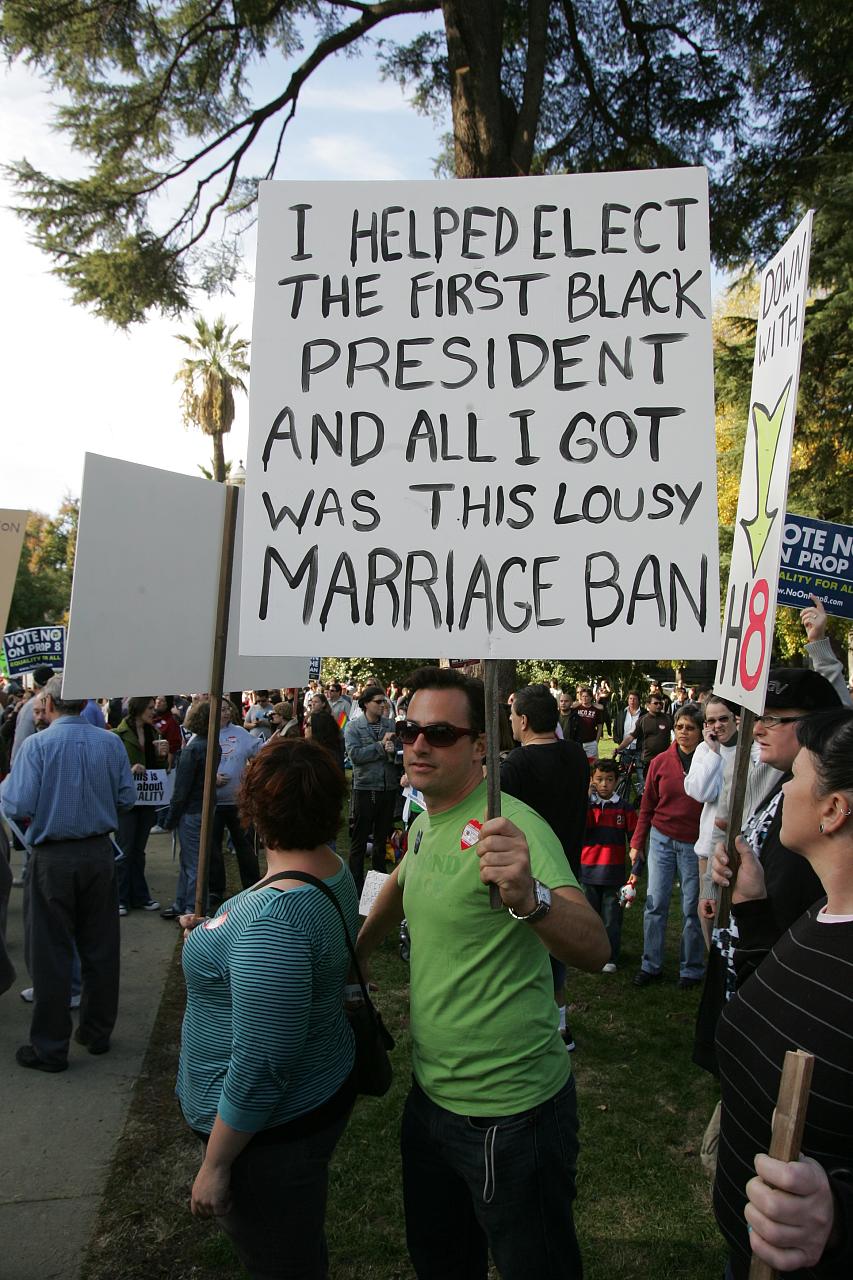 A Proposition 8 Protest in Sacramento, California

California, land of sunshine, surfing, and movie stars… well that would be true if there was not a whole state attached to Los Angeles and Southern California. Many people here immediately associate Californians with the typical stereotypes of “oh you’re from like the OC right?” or “oh you went to university in San Francisco so you must be like a hippie or really liberal.” And in all honestly most of those clichéd images you have of people like me are true but I come from Northern California. I live in the mountains and I have never been to the OC in my life. What surprises me most though is that California’s Proposition 8 still goes largely unnoticed as representative of the US government at large. The first question you might want to know is what difference does this all make?

In November 2008, the state of California legally banned same-sex marriage. Prop 8 amended Section 7.5 of the Declaration of Rights in the California Constitution, now headed as the “California Marriage Protection Act,” to read, “only marriage between a man and a woman is valid or recognized in California”. The passing of this proposition sparked an unprecedented reaction from both supporters and proponents of the bill.

During the ensuing two years, the campaigns for and against raised 39.9 million and 43.3 million [roughly £24.5 million and £26.6 million], respectively. Pro- or Anti-Prop 8 quickly became the highest-funded campaign on any state ballot, surpassing every campaign in the country in spending except the presidential contest. With the plethora of media coverage, support rallies, and court appeals one would think that in such a liberal state, where freedom of speech, religion, and the press would entitle one to freedom of choice in general this would have been overturned by now. Unfortunately, this is not the case.

When California’s proposition passed, approximately 40 other states passed bans on same-sex marriage as well. With nearly 80% of the US banning same-sex marriage one begins to question how such a thing can be in the land of the free. How can you deny a person the right to choose whom they marry? Same-sex marriage bans are as degrading and segregating as if bans were made on inter-racial couples, couples of different ages, or even couples from different countries. Whether or not you agree with the GLBTA [Gay, Lesbian, Bisexual, Transgender, Ally] community or lifestyle, can you really agree with imposing restrictions on someone else’s right to marry?

On May 26, 2009 in Strauss v. Horton, Proposition 8 was upheld as valid as voted, but marriages performed before the ballot went into effect in November 2008 would remain legal and legitimate.

Prop 8 was overturned on August 4, 2010 by United States district court Judge Vaughn R. Walker in the case Perry v. Schwarzenegger. Judge Walker issued a stay on the ban as he found the initiative violated the Due Process and Equal Protection Clauses of the Fourteenth Amendment to the United States Constitution, which prohibits state and local governments from depriving persons of life, liberty, or property without certain steps being taken to ensure fairness. This is the same amendment that was used in with Brown v. Board of Education (1954) and precipitated the end racial segregation in the US. On August 12, 2010, Walker announced the stay on the ban of same-sex marriages (so they could be performed) as of August 18, 2010.

However, sneakily on August 16, 2010, the United States Court of Appeals for the Ninth Circuit indefinitely extended the District Court’s stay, stopping new same-sex marriages in the state of California pending appeal. The question now remains whether the proposition 8 supporters have the legal right to appeal. While this case is now on an accelerated timetable, the process of appeal will take at least another six months if not two years. If this process lasts until 2012 there will in all likelihood be another proposition initiative to repeal Prop 8, making the last four years of court appeals, fund raising, and effort to remove the ban seem moot, which would not be so bad, as it would reinstate marriage equality in California. Yet, there is still another question that could be raised by the 2012 election, what if the proposition stays? President Obama’s declining position in the polls, an early Supreme Court seat opening, and the backlash against the current Democratic governor of California, Jerry Brown, could potentially swing the political sphere back towards a more conservative and restrictive system.

As a moderate/liberal leaning ally of the GLBTA community the bans placed on same-sex marriage are appallingly restrictive and infringing on the basic civil liberties of every human being. Whether you are supportive or against the notion of same-sex marriage, it will be difficult to reconcile true freedom with a denial of basic rights.

While this issue might not be as prevalent in the UK as it is in many states of the US, I urge you to stop and ponder this final thought, is it worse to allow a marriage between two people in love who happen to be of the same sex or force them to live as slaves to societal limitations?