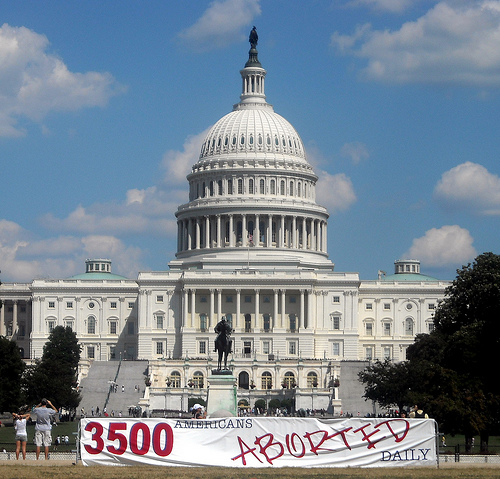 The 38th anniversary of Roe v. Wade – the seminal US Supreme Court case that legalised abortion – may be viewed a landmark victory for liberals and in the sustained protection of basic civil liberties. But recently proposed legislation risks chipping away at this fundamental right of pregnancy termination, and in doing so exposes a darker side to the pro-life, conservative lobby.

While the issue of pregnancy termination remains highly emotive and divisive (and understandably so), it is nevertheless a bona fide right bestowed upon the American people, by the principle of stare decisis, via the Supreme Court. Whereas in the 19th century laws often prevented women seeking an abortion, the 1973 case of Roe v. Wade ruled that such laws prevented a woman’s right to privacy (a right detailed in the American Constitution), and thus were unconstitutional. Or, at least, from 1973 it has been understood that healthcare providers are obliged to allow women to terminate pregnancies, especially if the pregnancy could risk the mother’s life.

The Protect Life Act seeks to change this. Republican House-member Joseph R. Pitts (PA), alongside 100 co-sponsors, is aspiring to introduce a congressional bill that would allow hospitals to deny women life-saving care if her foetus is at risk. To reword this, their view is that women in life-threatening medical situations should avoid being given treatment that could potentially abort the pregnancy, but which could save the mother’s life. To a person of liberal persuasions such as myself, this has two incredibly negative consequences: the freedom of the woman to choose her medical treatment is diminished, as is the woman’s right to life.

But where draw the line? The difficulty with this particularly polarising topic is the way in which it scarcely allows for moderate views. Particularly to those of religious persuasions, abortion is on a par with murder: allowing abortions to take place is akin to legitimising such an act. With this view in mind, it is easy to see why such a strongly opinionated lobby has been established.

Although hailed as a monumental and long-awaited piece of legislation, Barack Obama’s recent health care reform has only broadened, intensified, and further complexified the abortion debate. Under a system of entirely private health care, one can see a strong libertarian argument for permitting abortions to take place; it is the private will of the participant, who has imparted their own money to undergo the procedure. However, under a system of partially-state-funded care, the right to an abortion is (in the right-wing view) arguably less clear. Is it right that the money of the state, obtained from the taxes of American citizens, be put towards such procedures?

This line of argument has brought its own wave of legislative battles. Republican Representative Chris Smith of New Jersey recently put out the No Taxpayer Funding for Abortion Act. Under the current system, a ban on publicly-funded abortions is in place, but must be renewed annually by congress. Under Smith’s proposals, this renewal would not be necessary.

But despite the controversy surrounding abortions, the Protect Life Act surely poses a monumental threat to human liberty (the freedom of choice of individuals), and raises questions over the ethics of medical procedures. Even if right-wing groups, such as the “Tea Party”, are generally accepted to have a sound case in objecting to the funding of abortions by the state, their healthcare alternative prescribed in the Protect Life Act would be far worse than the status-quo. In the case of such abortion prohibition, the alternative almost certainly comes in the form of illegal clinics. To draw upon the 2004 film Vera Drake, this can often have life-threatening consequences for the women seeking abortions. Although the far-right, pro-life lobby may have a sound objection to the use of abortion, their alternative would in fact be endangering the lives of many women.

The Protect Life Act is a misnomer. Politicians campaigning for this legislation – or similar forms of legislation – would claim to be protecting the lives of unborn children, and to be supporting the most ethical form of medical action. But to agree with this, I feel, is misguided. Although it should be one’s personal right to choose whether abortion is right or wrong – or whether to undergo one – this does not mean to say it should be appropriate for this political branch (or any other, for that matter) to strip the right for women to seek life-saving care in the name of their views on this topic. If political and civil freedom is to be maintained, such proposed legislation must be called into question.