Pointless protests? The effectiveness of demonstrations in the UK 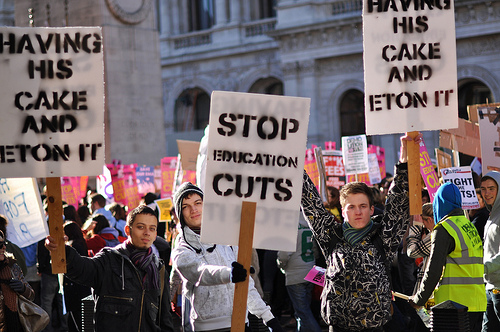 With the student protests still fresh in everyone’s minds, I began racking my brains for an angle which the BBC website, The Guardian and the Daily Mail haven’t pored over and praised, or indeed condemned. This article, as a result, is not setting out to ask whether the protests were representative of all students in England, or, indeed, whether the coalition government was right to announce the higher level of tuition fees. Instead, it intends to ask a more fundamental question – whether this protest will actually have any effect.

Seemingly, the answer is no. David Cameron has condemned the sporadic outbreaks of violence that occurred during the protest, but has not in any real way signalled a policy turnaround. Indeed, the closest that we can get to one is Nick Clegg’s assertion that tuition fees will be limited to around £9,000 a year – which, as we have seen, hardly stopped the demonstrations. Why then will nothing of any real value change?

One valid argument lies with the largely ineffective nature of this particular protest.

Around 50,000 students attended the march in London, with 50 people arrested during the demonstration around the Conservative Party HQ at Millbank; one of them for throwing a fire extinguisher off the roof; this is hardly the stuff of Gandhi or Martin Luther King. In contrast, 1.2 million people protested against the increased retirement age in France and 1 million marched against the war in Iraq in 2003.

The student protest, in light of this, seems to fade into the background somewhat.

It is, of course, entirely possible to argue that just because people didn’t attend the protest doesn’t mean they’re not upset. On the contrary, this is undoubtedly so. Talk to a representative number of students around Durham and you would find this out. But sullen resentment isn’t going to change the mind of Dave or Nick; nor is throwing a fire extinguisher off a roof. The obvious question, then, is what would make them reconsider – extreme violence? Wave upon wave of strikes and demonstrations as seen in France? More fire extinguishers thrown off roofs?

Ultimately, it seems that there is very little we can do. The NUS has proposed forcing by-elections in Lib Dem seats where their candidate was elected on the student vote. Nice idea, but probably unlikely to work in practice. The coalition government has a 70-plus majority, and a deficit-busting programme designed largely by civil servants and Tories, rather than Lib Dems. In effect, there is about as much chance of reducing the 70-plus coalition majority to nought as there is of me winning the fittest fresher title (I’m a third year).

Maybe we need to take this to a more abstract level. If we consider our recent political history, this failure, it seems, is not an isolated occurrence. Over the past century there has been a succession of protests, many of which have failed abysmally. It would, of course, be ridiculous to claim that protest in the UK simply doesn’t work; the suffragists, gay rights campaigners, and poll tax rioters would disagree with that. Yet, if one looks at the various protest movements undertaken over the past century, a general pattern does – to my mind at any rate – seem to emerge.

In essence, for a protest to be successful it must be dealing with either a sufficiently sympathetic, or sufficiently weak contemporary government.

The suffragists, for example, were operating in an atmosphere of unprecedented political liberalism in Edwardian Britain; the Liberal government under Asquith attempted a number of times to introduce a bill enabling female suffrage, and was only curtailed by the onset of the First World War. The civil rights movement of the 1960s, advocating amongst other things the legalisation of homosexuality, equal pay for women and improved rights for ethnic minorities, was likewise successful – because it had the backing of the Wilson government.

This broad rule of thumb applies in the “weak government” aspect as well. The poll tax rioters of 1990 won because Margaret Thatcher, with insufficient parliamentary support and waning general popularity, was forced to resign over the issue. Likewise, the union strikers of the “Winter of Discontent” were able to capitalise on the Labour government’s weakness (it had a majority of three in Westminster) to achieve huge personal gains.

In contrast, the CND protests from the 1960s, the Miners strike of 1984–85 and the protests over the invasion of Iraq have all failed to influence government policy. Why? The simple reason is because the government of the day commanded sufficient support to ignore such protests, and so was able to pursue its policies regardless.

Obviously this is not a rule which covers every eventuality; for example, members of successive governments may not have liked the South African apartheid system, but there was little they could do in support of the student protests. It is a useful generalisation nonetheless, and one which can go some way in helping us to understand the reasoning behind the apparent failure of the tuition fee protests.

It shows us that in reality, in 2010, whatever our views, and however many protests we may hold, the government is in too strong a position to be budged on this particular issue.

This is not, of course, an attempt to dissuade people from using their right to protest. Far from it. It is merely a warning that we shouldn’t expect too much in the way of U-turns in the near future.