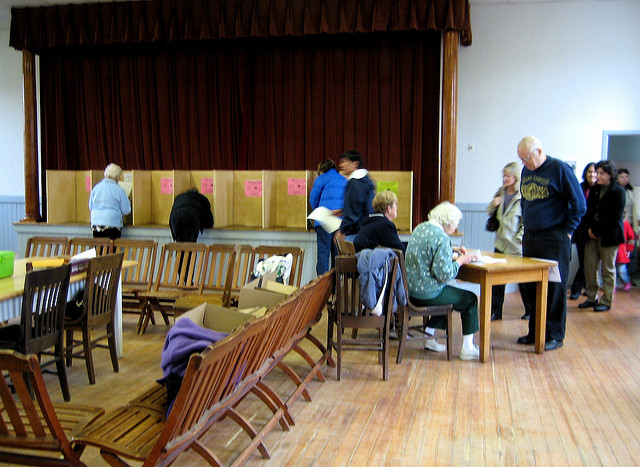 Are we obliged to vote?

Some time ago Russell Brand earned widespread media attention, including an interview from the great Paxman himself, when he declared the need for revolution. The ideas Brand put forward were a half garbled mess of idealistic declarations, portentous warnings and a thimbleful of practical suggestions. Understandably the press has been largely critical of Brand, and even those who have argued that his diatribe has value have largely confined themselves to pointing out that he is highlighting relevant problems despite his failure to provide any coherent answers to them. Nowhere has Brand received more criticism than on his comments about voting. This is, I think, rather interesting. Nowhere in any of the commentaries or opinions I have read have I encountered a serious discussion of Brand’s critique of the voting system and his call to young people to simply not vote. Brand’s argument is simple: voting does not change anything (or at least provides no meaningful change for a significant number of voters) and by voting one is implicitly supporting the system rather than demanding a new, radical and (for Brand) revolutionary solution. That it is this aspect of Brand’s argument that is dealt with most briefly is revealing, and the arguments that are marshalled against it warrant closer examination.

The majority of the arguments can be traced back to an idea with which we are all familiar. It goes something like this: our forebears gave their lives for our freedom and our right to political self-determination; it would be perverse to ignore that sacrifice by refusing to participate in democracy. While this argument initially seems compelling, it actually contains a number of problems. The first issue that we have in applying it to Britain is simple: which forebears? For many these forebears seem to be the soldiers of the World Wars; however, even a cursory glance at history shows us that these wars were caused by far less noble motivations on all sides.

Still, perhaps we are looking in the wrong place for the architects of British democracy. In 1848 a large crowd gathered in London and prepared to march on the Houses of Parliament demanding, amongst other things, universal (male) suffrage. This group, the Chartists, could perhaps serve as better martyr figures, the heroic figures of a suitably vague past struggling for the rights of the masses: forging our democracy in the fires of progress just as the industrial revolution was consuming the country. This would be tempting except for the fact that the Chartists failed: there was no march on Parliament; the petition they submitted was ignored; and within a decade the Chartist movement was barely more than a memory. All this, it should be added, was in stark contrast to the rest of Europe where France, Austria and the German states were all consumed by fervent (if short-lived) revolutions. While we can perhaps turn the Chartists into martyrs, their movement hardly ushered in a new dawn of democracy. After all, it would be more than seventy years before universal suffrage was finally achieved.

This point could be made ad infinitum but at the heart of the issue is this: campaigns for the extension of the franchise have tended to be successful where motivated by particular class or group interests; even the unsuccessful Chartists have been associated with working-class movements. Democracy was not the ideal to be achieved but a tool to be used. Even such lauded examples as the suffragette movement suffer from this problem (by no means detracting from the value of their campaign). There is no single historical group to whom we owe our democracy, and that democracy has rarely been an end in itself in British history.

It is also important to remember that, since the eighteenth century, the franchise has only ever been extended by Parliament, never by action from outside it. Thus it is crucial that we understand the rationale of those granting suffrage as well as those receiving it. The 1832 Reform Act is often hailed as the first step on the road to universal suffrage and the point at which the aristocracy’s monopoly on power was broken. Lord Macaulay’s (a reformer and member of parliament) comments on the purpose of extending the franchise is instructive in countering this triumphalist narrative:

For Macaulay this was not about empowering but controlling the people through a programme of limited concessions. It is not for nothing that Marx argued that the British aristocracy had proved itself peculiarly gifted in manipulating and influencing bourgeois opinion. Gradual extension of suffrage was used as a tool to pacify the people; it was not intended to upset the status quo.

At first, all this history may not seem very relevant to modern political issues. However, it does provide a valuable corrective to our idolisation of democracy. It shows us that voting was important to those who campaigned for it more for the uses to which they put it in support of their own group interests than for any intrinsic value in voting itself. It also shows us that an extension of the franchise can be used by elite groups to maintain their privileged status. Here we return to Brand’s point about “tacit complicity”. By voting, whether we like to admit it or not, we support the system and we must recognise that. This is not to agree with Brand and suggest that we should not vote, but what we must always remember is that this is the cost of voting. However, as we have seen above, there are also clear benefits to voting, namely the empowerment of individuals and the right of all to political expression. Thus, when we vote we must always weigh up these two sides and remember that ‘democracy’ is not valuable for any other reason than it is the best system for providing this empowerment.

The question of whether or not to vote is a matter of individual conscience; but we must understand exactly what we are doing when we vote. We should not vote simply because we have been conditioned to support this particular political system; we should not vote because of some imagined debt to half-remembered forebears; and we should not vote because those who do not vote are stigmatised by society. We should vote only because it empowers us and gives us a venue for political expression, and if it ever ceases to be effective in this regard, we should not hesitate because ‘democracy’ is somehow sacrosanct, but we must seek to change the system to one which better empowers us. This is not to say that we are there yet or that revolution is just around the corner; I do not think it is. It is simply to avow that no aspect of our political system should be left unexamined and that the only criterion by which it should be judged is its effectiveness as a tool for the empowerment of individuals.