On the Origins of Spinelessness in the American Left 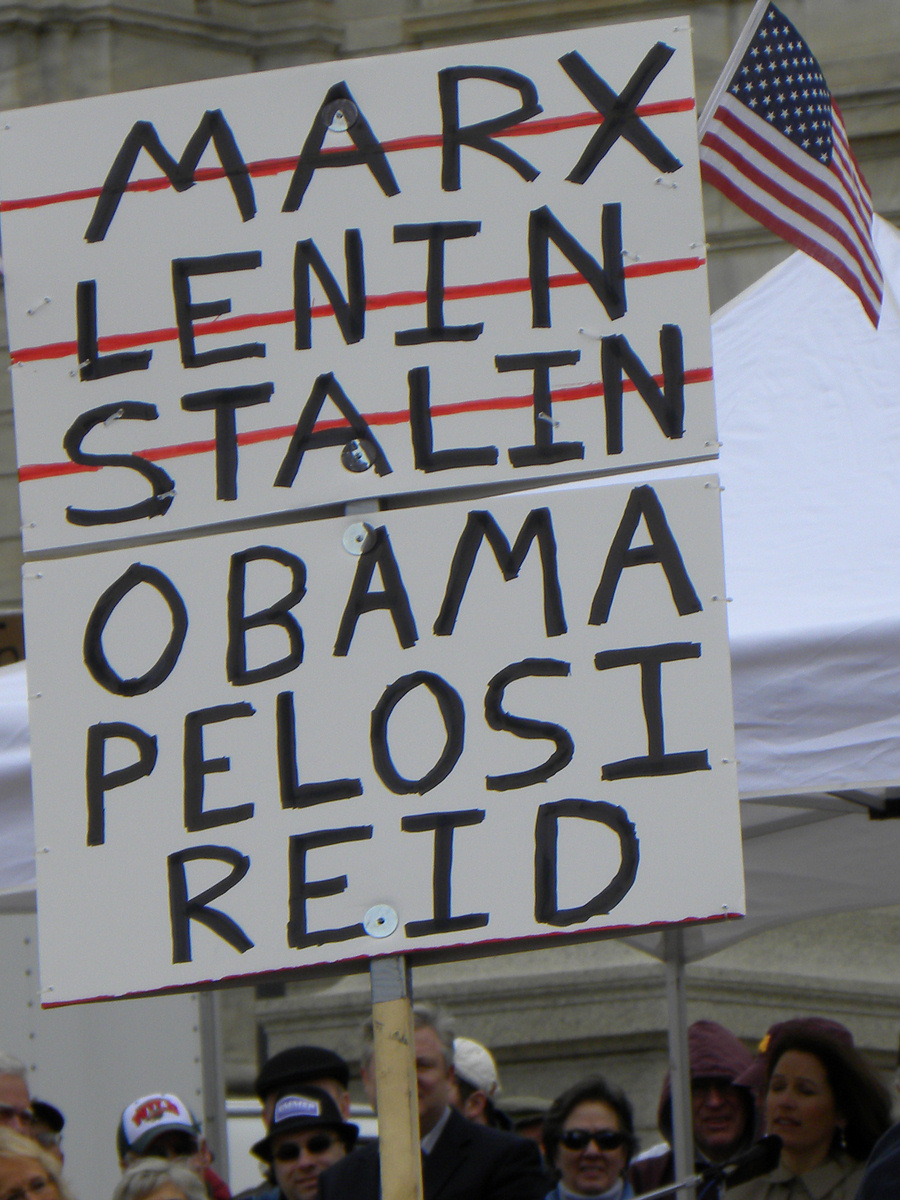 Tea Party demonstrators make their views on the theoretical basis of the Democratic Party clear.

Last year Barack Obama finally signed into law hotly contested health care bill that fell notoriously short of his stated intentions during the 2008 presidential campaigns. Two months ago the United States nearly defaulted on its public debt because of a campaign of indignant obstructionism from Republicans. In my home state of Ohio, a civil war is now taking shape between public sector unions and a budget-slashing executive that wants to strip those unions of their collective bargaining rights. The common theme in all these confrontations has been the passionate, almost cheerful confidence of the American right and the patchy, half-baked do-goodery of their opponents on the left. Having watched the same players act out this poorly written farce in the face of a host of critical issues (think political Groundhog Day, without the jokes), commentators are increasingly asking the question: why can’t the American left stand up to anyone?

The question is a good one. The Democratic Party’s centre-left counterparts in Europe- Labour in the UK, the Parti Socialiste in France, and a host of Social Democratic parties and left-coalitions scattered throughout the EU – incorporate the righteously indignant style of the American right into their rhetoric. Ed Miliband fashions himself into a defender of public benefits and enemy of Tory cynicism. The French left labels its enemies “capitalists”, thereby neatly dismissing them. Left parties across Europe confidently (sometimes messianically) push for increased integration with their neighbours, despite recent histories of mutual suspicion and war.

None of this is a feature of left politics in the U.S., and it shows. Republican truisms about small government and socialist waste regularly drown out the Democrats’ idealistic (occasionally utopian) pleas for safety nets and social justice. While the European left pontificates about the dangers of capitalism and the virtues of the welfare state, the Democrats are singing the “Why can’t we all just get along?” song, and trying without much success to buttress crumbling New Deal-era social programs and guarantees.

The main reason for this difference has to do with theory – or, rather, lack of theory, for the contemporary left in the U.S. is largely devoid of it. Impassioned invocations of “liberalism” and liberal ideals are common, but by and large they refer to an unspecific vision of an open society rather than a practical, argument-based attack on the equally nebulous term “conservatism”. Key to this point is the strange character of the term “liberalism” in the U.S.: it is synonymous with the left and often pejorative; it does not refer to free trade economics or a rights-based social contract, as it often does in European history. The Democratic Party is supposed to take its cues from liberal political theory, but unless one takes to thumping tomes by Locke on the Senate floor (and unfortunately that does not help much in a health care debate), there are precious few messiahs to turn to. This is perhaps one of the reasons so many debates in the US dissolve into quarrels over the intentions of the founding fathers, who are in fact giants of liberalism, but who are conscripted onto every side of every debate in American life. The Democrats therefore have a tough time claiming to be the inheritors of the founding fathers’ idealism, and, unfortunately, the various self-imposed limitations of the U.S. constitution fit nicely with right wing, small-government arguments. Without a clear spiritual leader or a party book, the American left must cobble together an awkward series of precedents and sentiments for every issue and invoke altruism as a self-evident political principle, while its opponents claim quite simply – and often convincingly – that we cannot pay for altruism.

On the other hand, parties of the European left have found their prophet and are quite confident that they have the socio-political universe figured out. Scanning a list of major left-wing political parties in various European Parliaments, one scarcely finds a name that does not contain “labour”, “social”, or “socialist”. Joseph McCarthy may have eviscerated American Marxism, but his long arm never quite reached across the Pond. Socialist theory, no matter how rarely parties use it, is still the dialectical backbone of the European left. So although Tony Blair cut Clause IV from the Labour Party Constitution, the historical association gives the political impression of coming down from an uncompromisingly socialist stance to a more cooperative one. In the U.S., it is exactly the reverse. The right wing can easily accuse the left of taking the country down a rabbit hole on every issue, and the left cannot claim that it has already given up on its strict socialist ambitions. This has been key to the debates on health care and the debt limit, where the President and the Democrats seem to be fighting from compromised positions, even though they control much of the government.

Structural and cultural factors play their part in reinforcing this lack of direction in the American left. The possibility of different parties controlling the executive and legislative branches of American government, which is impossible in a strict parliamentary system, was a brilliant check on executive power when it was invented, but can neutralize modern governments for years at a time. The low level of public debate crystallizes party lines and cultivates public distrust of political creativity. The story of the success of American capitalism makes voters and representatives unwilling to adapt it to modern social realities. And post-Cold War triumphalism lingers to make a Marxist out of anyone who backs new social programmes. When it is time to argue a point, the American left that never really flirted with socialism finds it hard to prove that it is making concessions: dialectics do count for something after all.

The problem is that this is not just a story about American leftism: the nuances and consequences of American politics reverberate throughout the world. European leaders watched anxiously this summer as Congress quibbled dangerously about routine legislation. The Chinese government used the moment to point out the backwardness of liberal democracies (while it quietly clamped down on agitating elements in its own country). Foreign companies worried about American intentions choose not to do business there.

This is not to say that the untrue compass of the American left is exactly a calamity. And it really is not necessary for Nancy Pelosi to distribute copies of Das Kapital to her allies in the House. But, speaking from somewhere in the sceptical centre, intelligent, well-articulated theory has been the foundation of left for the past 150 years. It is a sign of healthy democratic societies, and a check against gut-reactionaries and parochialism. It would be good for the world if we saw a little more of it in the U.S. – then maybe we could all just get along.