No Country For Unenlisted Men 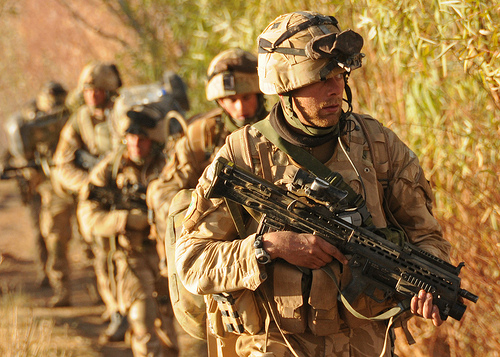 Is the re-introduction of national service tantamount to a milder form of slavery?

It seems to be a tendency of all generations to complain about how unruly their youth are. Society seems to lurch from moral panic to moral panic; in the 1950s it was the Teddy boys, in the ’60s Mods and Rockers, and in our own day inner-city gangs and the ever-pervasive chav. Regardless of how justified these fears are, the reintroduction of national service is forever mooted as a solution: by engaging young people in the armed forces for a period of time, the hope is that they will be transformed into valuable members of society.

Would it work? Politicians must be cautious about proposing any idea as a panacea, but it would clearly have some beneficial effects. It seems unlikely, for instance, that knife crime would continue to be a problem – teaching young people to kill also necessitates teaching them restraint. National service would likewise cut the very high rate of youth unemployment at a stroke: not only for the period while service is compulsory, but also by offering a clear career path to those who feel taken with the Forces.

This is the theme of this week’s Durham Union Society meeting. Rather than featuring the usual seasoned debaters, the DUS will instead host The Cyrenians for the annual “Second Chance” debate. For the past few weeks, the charity, with the group of Union members, has been training a group of vulnerable people in the arts of debate and rhetoric, and this Friday will see the culmination of their efforts. Previous years’ debates have focused on the charity’s own concerns of drug and alcohol abuse, but this year – perhaps in response to the government’s “Big Society” narrative – they have instead chosen to debate the merits of conscription.

It may not be conscription, but it is all too easily forgotten that the government has brought back national service. The “National Citizen Service” aims to recruit sixteen-year-olds into charitable work, and though it is not compulsory the hope is that it will come to be seen as a “rite of passage”. Only time will tell whether it will work in such a watered-down fashion, but the modifications are evidently an attempt to address some of the drawbacks of national service as it existed in our grandparents’ generation.

Most obviously, drafting people into military service infringes their human rights. Conscripting citizens against their will is perilously close to slavery – although historically it has only been practised in Britain when the situation demanded it, there is an argument that it ought to be regarded as part of the fulfilment of the social contract, much as paying taxes is. Regardless, necessity is not a factor nowadays: nearly all modern warfare is asymmetric. Britain’s problems in Afghanistan stem largely from the unrest of the locals, rather than any shortage of troops. Nor does it seem likely that we will be fighting a war in the near future which would require any great manpower; the age of “total war” is, thankfully, over. This “problem” has beset the German conscription system: although some sort of service is compulsory, including an option for something very similar to Britain’s National Citizen Service, less than half of young men are needed by the military.

There is also the economic argument, more important than ever. At a time when the government is slashing the defence budget, scrapping the Ark Royal amongst a myriad other things, it would be odd to start increasing troop numbers. Indeed, the cynic might surmise that the National Citizen Service has been chosen because it achieves all the PR effect of full national service, while being only a fraction of the price. No-one wants to appear a miser, but any sturdy argument in favour of national service will have to judge the project on its likely costs too.

As the debate is a charitable one, it will be open to all, members and non-members alike. If you’re interested in the issue, feel free to come along to the Debating Chamber on Palace Green this Friday, December 3, at 8.30 pm.