Mendacious MPs: The rise and fall of Phil Woolas 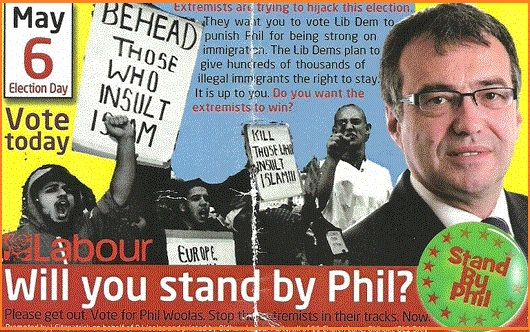 Some of Woolas’ defamatory election literature

An anti-democratic outrage. A court, “steeped in Victorian prejudice”, overturning the express will of the people. A courageous politician, “abandoned by the party he has served”, struggling to reverse a manifest injustice. If one believes his (rather brazen) website, how on earth could a judge dare to criticize that bastion of honour and integrity, Phil Woolas?

Until two weeks ago, Woolas was Member of Parliament for Oldham East and Saddleworth, having scraped home in May’s election with a majority of just 103. His opponent, the Lib Dem Elwyn Watkins, challenged the result, alleging that Woolas had knowingly defamed his character in order to win the election.

Somewhat surprisingly – given that the last time such a thing happened was in 1911 – the specially convened Election Court found in Watkins’ favour: the result was declared void, Woolas was kicked out of the Commons, and barred from standing for election for three years.

Woolas’ campaign, it has emerged, was based on “mak[ing] the white folks angry”. Oldham was the centre of race riots in 2001, and Woolas sought to capitalize on the still-simmering ethnic tensions by making his opponent out to be on the side of the extremists. In an act of mendacity which would have made Tony Blair blush, he accused Watkins of pandering to the Muslim Public Affairs Committee, an Islamist group, and implicitly endorsing the violence they apparently threatened against Woolas. Not only did the court find no evidence for these claims, it also found that Woolas had no reasonable grounds to believe they were true – that is, he had intentionally misled the public for his own advantage.

The reaction to this among politicians has been rather telling. Although Harriet Harman has disowned Woolas absolutely, the rest of the Parliamentary Labour Party seems to have rallied around one of their own. Just as those caught out in the expenses scandal insisted that their dubious claims were “within the rules”, the political class has asserted its right to do whatever it likes, regardless of both public opinion and due process.

Yet even with the law there is something of a double standard. Throughout the election campaign, the Conservatives dismissed Labour’s warnings that they would raise the rate of VAT as scaremongering – yet George Osborne’s first budget saw it rise from 17.5% to 20%. Likewise, the majority of Liberal Democrat MPs, including Nick Clegg, signed a pledge promising not to raise tuition fees for students; with his connivance, they are now to rise to £9,000 a year.

How is it that it is acceptable for political parties to lie about what they would do in government, but not for Phil Woolas to lie about his opponent’s character?

Clegg maintains that he changed his mind when he was appointed as Deputy Prime Minister, and could see the public finances in detail; and that may well be true. It does suggest that he failed to do his research beforehand, but that’s by-the-by. A few years ago, a lawsuit was attempted against Gordon Brown for reneging on Labour’s promise to hold a referendum on the Treaty of Lisbon; the court found that “manifesto pledges are not subject to legitimate expectation”. This may sound perverse – in effect it’s arguing what the cynical have known all along, that such promises aren’t worth the paper they’re written on – but it’s an important principle of Parliamentary sovereignty.

Parliament can do anything except bind its successors; if one group of politicians breaks their promises, the electorate ought to vote in their opposite numbers next time. As, on the whole, we did do.

Despite parties’ occasional tendency to dress them up as such, manifestos are not contracts. It may be ungentlemanly to say you’re going to do one thing and then do another, but it’s not illegal. But by defaming Elwyn Watkins’ character, Phil Woolas would have committed an offence even during Ordinary Time. Elections are the modern equivalent to the Roman Saturnalia: a brief period in which the masters become the servants, and vice versa. Actions which may be trivial at other times can instead have grave consequences. What Woolas did was effectively libel: the unique situation meant that instead of writing a big cheque and carrying on unharmed – as Ian Hislop might do – he instead lost his livelihood.

Without the protection of electoral law, we might end up with a situation similar to that in the US, where the senatorial candidate Christine O’Donnell felt obliged to dispel rumours by announcing “I’m not a witch.”

Woolas deserves everything he gets. As with the pending trial of David Chaytor et al., his main purpose is pour encourager les autres. Regardless of whether his judicial review succeeds in overturning his electoral ban, his case will ensure that future electoral literature stays strictly within the bounds of veracity. Or as least as much as possible. The trial of David Cameron and Nick Clegg, however, is ongoing, with a decision expected in early May 2015. May the electorate have mercy on their souls.