Mama, Don’t Take This Badge Off Of Me 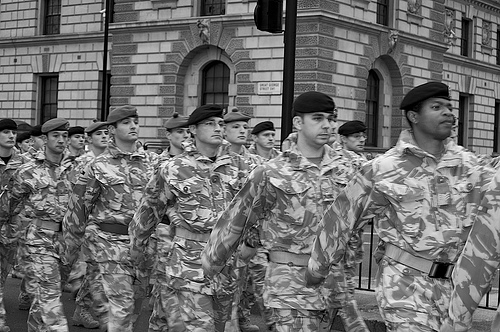 Soldiers returned from Iraq marching into the House of Commons on 23 February 2009.

“This House Would Fight for Queen and Country”

“This House Would Fight for Queen and Country” – that is, not necessarily the geographical land comprising the country, or for the government that tries to run it, but for everything that it represents; for everything that defines the country’s people; for the values of the true Englishman (or Scotsman, Welshman, or Irishman), which, as figurehead of the nation, the Queen represents. It is probably, and sadly, true that most of the inhabitants of the physical country can barely be thought of as British by these standards anymore, if a majority ever could: what we would fight for is an elusive thing, rarely embodied in its entirety, but, we believe, definitely worth fighting for.

What are these values then? Well, not easy to define, for a start. Imagine all the noble, virtuous ideas and principles in the world and combine them with a significant amount of eccentricity and dry wit, and you’ll be getting close. Altruism, chivalry, decorum, learnedness, etiquette, and seemingly pointless and bizarre traditions that unite people across time, space, class, race, and culture. These are the things this house would fight for. Nay, these are the things this House would keep calm and carry on for, in the face of whatever opposition the world may throw at us.

However, it is also evident that the world is often more physically hostile to our national values, and often just as vehemently as we true Britons defend them. But, in the steadfast and self-assured way one can expect of a Brit, we can of course be relied upon to fight in more physical terms. When the innocent, anywhere in the world, are threatened with violence, it is a direct affront to us, whether this takes the form of thugs attacking someone in a Western city-centre or the local attacks of terrorist extremists in the Middle-East. When a man is denied his basic rights of freedom anywhere in the world, it is a challenge to the honour of every Brit. We are prepared to sacrifice as much of ourselves and our wealth as is necessary to ensure the freedom and altruism our country stands for are upheld throughout the world, in every culture, and in the face of whatever personal danger this may incur.

Britannia herself is a warrior, not because we are a warlike nation: the opposite is true. We’re far too polite and gentle to find pleasure in such things, but we are a nation whose determination, steadfastness, and courage mean we are prepared to fight – calmly and moderately – where necessary to maintain the values our country represents. Our high attitude to life, the preference of the ideal Briton for the arts and for academia over a more bloodthirsty life, may have led Napoleon to mistake us for “une nation de boutiquiers“, but as he soon found out, we are far from just that (indeed, the modern business-obsessed world often embodies the selfishness and low-mindedness that we abhor). We are so proud of Britain that we are prepared to fight to the utmost for it, for the highest of ideals it represents and embodies.

To argue for the proposition at the debate this Friday will be Peta Todd (AKA Peta, 23, from Essex), a glamour model, who has demonstrated the selflessness required of a Brit in her innumerable contributions to the work of the charity Help for Heroes (which aims to provide better facilities for British armed servicemen injured in the course of duty). In the name of the charity she has climbed Mt. Kilimanjaro, cycled 400 miles in five days, bobsledded, wing-walked, skydived, and ran the London Marathon. Joining her will be Lt. Col. Brimms, a decorated senior British Army officer and commander of Field Army at Land Command from 2005 to 2007, who has himself fought physically on many occasions in the name of all that Queen and country represent.

Once the shout: “Cry ‘God for Harry, England, and Saint George!’” would have made people sign up in their thousands for the army. But in such a time of austerity and depression, is the call to war sensible?

In a period where belts are being tightened and VAT is ever increasing, surely the government cannot justify such expense on the army. David Cameron has already had to cut spending on the armed forces by 8% to, as he told the House of Commons, “get to grips with the biggest budget deficit in post-war history”. That last part is a bit telling: “in post-war history”. Does it not suggest that wars, such as World War II, bring about such a huge deficit that it serves as a benchmark of our reckoning of financial history? The UK finally paid off its loans to the US for World War II on 31st December 2006, with a final payment of £45.5 million, sixty-one years after the end of the war. This clearly shows the lasting financial disadvantage of war.

But it is not only the financial impact of war that should be considered. War creates a hole not only in the UK’s bank balance but in our social framework: children lose parents, wives lose husbands and parents see their children buried before them. In any war, hundreds of children miss out on a normal family life as their father or mother fights away from home for months or even years. Evidence has suggested that the Government has struggled to provide adequate welfare support to these families. Even as recently as last year, Bob Ainsworth told the Iraq inquiry that the Government was, “simply not getting it right… Again and again we were letting people down.” With all Britain’s experience over the past century of long wars, it is clear that nothing can adequately compensate for the social devastation that war causes.

There appears to be two themes to this debate: one of the necessity of war, and the other of monarchy and patriotism. Since Princess Diana, the media has taken a morbid fascination in the monarchy, doing their utmost to find every fault and bad camera angle. The public delights in knowing royal scandals as a kind of proof of their humanity. It seems that at present, unless the Monarchy is giving us a free party, as seen in the celebration of the Golden Jubilee, or a free bank holiday, that public consensus of it is apathetic at best. The Monarchy’s role has been constantly challenged, as shown in the DUS’ debate of last term, “This House would axe the Monarchy”. As for patriotism, apart from a vague revival for World football, tennis, and rugby matches, it is not a main part of British culture. Unlike the US, British homes very rarely hang the Union flag. Now in a multicultural society, for Britain to have the patriotism of the War periods would just seem racist and excludist.

In the upcoming DUS debate, we have speakers for the opposition who may take two very different approaches to this motion. Harpal Brar is leading the opposition. Brar is a well-known communist politician, particularly known for his position as chairman of the Communist Party of Great Britain (Marxist-Leninist) in the UK. He is also a prolific communist writer, having published eight books on Marxism, imperialism and revisionism. Since coming to Britain, he was first a student and then a lecturer in Law at the University of Westminster.

Alongside him is Steve Bell, Treasurer of the Stop the War Coalition and senior member of Communication Worker’s Union, which represents workers in postal, administrative, financial and telephone companies including the Royal Mail Group, BT, and many others. Together, these two speakers will present a very exciting opposition to the motion.

Come along to the debate this Friday at 20:30 at the Debating Chamber on Palace Green.