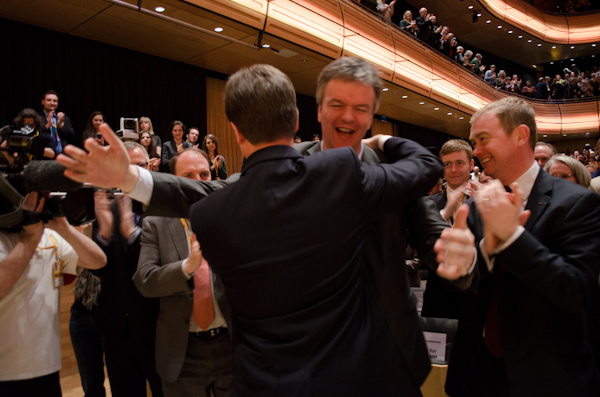 Having, last month, just arrived home from the end of Liberal Democrat Spring Conference, I thought it would be a good to write article on it. I do, however, apologise to anyone who bothers to read my ramblings, as this is quite a dense piece, rife with details of the Liberal Democrats’ conference procedure.

As a brief introduction: the conference was helpfully in Gateshead this year and Durham Liberal Youth took a contingent there over the three days. Liberal Democrat conferences are different from Tory and Labour ones because the leadership has no real control over them and ordinary members decide party policy there. Each local party and Liberal Youth sub-division are apportioned delegates who can vote based on their number of members; the local parties then vote for who their voting delegates to conference are (non-voters also attend in hoards, too). For this conference I was a voting rep for the first time, which was exciting.

Over the weekend, the party passed policy motions ranging from stronger protection of civil liberties (especially with regards to internet privacy) to reaffirming our party’s position on Europe (pro-EU but pro-reform), and even to changing the way the party will negotiate future coalitions with other parties (optimistic as always) and, probably most well-known, a discussion on the current Health and Social Bill going through Parliament.

The technical details of what happened with the NHS debate are quite dull but, since I’m a Lib Dem (so enjoy those details) and it’s important to understand this to understand what our conference decided, I will divulge. Since we had discussed the NHS at the last two conferences in policy motions (last spring our conference caused the long pause in the bill and over 100 amendments that have been made since), there was not really an option to have the debate as a full policy motion. So it had to take an emergency motion slot. These motions are proposed over the weeks leading up to conference, and then conference delegates vote on the Saturday (using STV) to select one. In this case, there were four possible motions: one on Syria, one on secret trials, one by party ‘rebels’ calling for our party to withdraw from supporting or defeat the NHS bill and one called ‘Save our NHS: the Shirley Williams motion’.

Now Shirley Williams is often described as ‘the darling of conference’: she’s a real delegate favourite, former SDP member. from the left of the party and certainly not considered in Clegg’s pocket. Yet she let her name be used in a cheesy way on a motion (clearly backed by the leadership) that, first of all, praised the amendments Lib Dem lords had made to the bill already, then called for a few further amendments and, most disappointing, in lines 31–32 of the motion said that, if these conditions were met, then Lib Dem parliamentarians should pass the bill. Once all the preferences had been reallocated, the Shirley Williams motion narrowly defeated the motion to withdraw, by 309 to 280 (I voted for the withdraw motion because I thought the debate needed to be had).

Importantly, this vote only settled which motion we would actually debate on Sunday morning! Nevertheless, the leadership’s nerves must have been settled, as even a no vote to this Shirley Williams motion couldn’t really be interpreted as delegates voting to drop the bill. In essence, delegates had voted to give the leadership an easy way out of a difficult political situation (quite generous, really).

Come Sunday morning, however, in a packed concert hall in the Sage (our rather smart venue this year), Evan Harris, former MP and, according to right-wing Tory Nadine Dorries, ‘Dr Death’, proposed that conference scrap lines 31–32 of the amendment. This was a very clever move: it meant scrapping the part of the amendment that explicitly called for our peers to back the bill, but it also meant that those against the bill could still vote for a motion praising Shirley Williams et al’s efforts in amending it. In a tense debate and a vote that required a count (we just hold our voting cards up and they estimate, normally), the deletion of those lines was passed relatively convincingly by 314–270 votes. The motion itself with those lines deleted then passed overwhelmingly.

So where does this leave us? Well, it fundamentally is not what the BBC and other outlets reported. The Lib Dem conference did not vote down the NHS bill, or vote against it. If we had wanted to do that, we would have voted to debate and vote on the other emergency motion that allowed that; but we obviously decided not to do that. Instead, we neither voted for the bill nor against; in fact, today we explicitly voted not to be in favour of the bill (note this is subtly different from voting against the bill). So, in the end, we decided to be a caricature of ourselves and sit on the fence!

So, will the Health and Social Bill survive and become an Act? Personally, I think it’s all up in the air. What was interesting was that again this year ordinary Liberal Democrat members met in a conference hall and could directly affect government policy; indeed, I suspect David Cameron was desperately hoping we would vote a certain way. As a party we have made mistakes in government for the first time in seventy years, and this NHS bill is certainly a tricky issue to sort out, but one thing is for sure: our party conference is now an important and powerful event, not a meeting of likeminded liberal eccentrics.