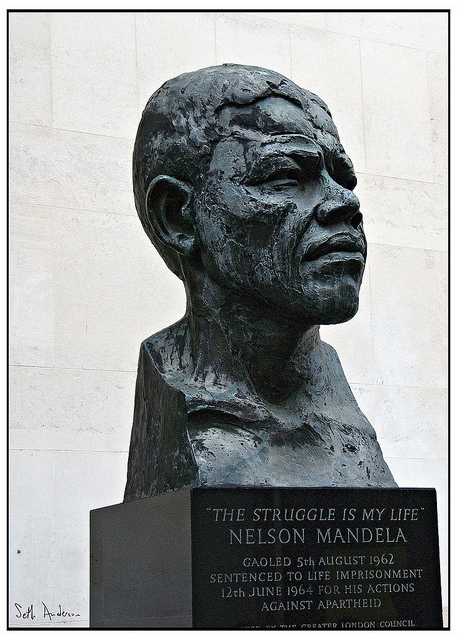 Speculation over the deterioration of Nelson Mandela’s health continues after a recent stay in Johannesburg hospital. South Africa’s ex-president has not been seen on a public outing since the World Cup in July 2010, when his wife had to help him raise his arm to wave to the crowds, and at 92 it appears he is increasingly frail.

The sobering thought that this human rights hero might not be with us for much longer is nearing a sad reality. The grief that will be felt globally at his loss is beyond comprehension. Since his release from captivity in 1994 he has been a symbol of freedom from oppression, and one for human rights in general. Is South Africa, or the world as a whole, ready to part with one of the greatest leaders of the 20th century?

South Africa will certainly take his death with immense difficulty. There is a question mark which continues to reside over the head of current president Jacob Zuma, who, although popular, has had numerous allegations made against him.

Before he came to power in 2009 he had only just been acquitted of the rape and corruption charges that he had been accused of. Indeed, his multiple marriages and his statement during his rape trial that he showered after unprotected sex to prevent possible infection is considered a detriment to the country’s HIV/Aids campaign to encourage the people to be faithful to one another and to use condoms.

Certainly, he has not filled Mandela’s substantial sized shoes, even if his popularity has not waned. He is not enough to alleviate his people’s fear that they might soon lose the greatest leader they have ever had, or are ever likely to have. Popular he may be, but it is not Jacob Zuma who has inspired people to strive for better civil rights and a better life for themselves, it is Mandela.

What about the rest of the world? After two days in hospital with a respiratory infection he is thought to have received many high profile visitors and over 10,000 messages of support from around the world, including from US President Barack Obama. This alone is evidence of the profound effect he has had internationally, and how sorely he will be missed.

The reasons for this adoration do not need much elaboration. He has spent most of his life as a member of the ANC struggling against the apartheid system. He was a political prisoner on Robben Island for 27 years before he was released and became the first black president of South Africa, a huge step in the history of that country. After he stepped down as president in 1999, he was an ambassador for South Africa until his retirement in 2004, and was heavily involved in campaigning against HIV/Aids.

This is why his opinions are still held in such high esteem. Couple such an incredible life story with an amazing personality and sense of humour which, despite his treatment during apartheid, have remained undamaged, it is not hard to see why he commands such respect and adoration from audiences worldwide. Surely then, the only legacy such a man as Nelson Mandela can leave is one that would make him proud.

Unfortunately, a negative effect of his death has already emerged before the event has occurred. Wars have already begun between his family, the ANC, the many foundations and charities he has founded, and his political and business compatriots, over the control and use of his name, which has become a global brand and is therefore worth millions. It is sad, but the abuse of his name can only become worse once he has gone, and he no longer has any say over who has the right to use it.

It can only be hoped that Mr. Mandela does not have to witness more than he has already seen of this greed. His name should not be used as a brand through which to make money, but as a watchword for the triumph of human rights over oppression. As a result of the events he has endured during his life he has already become an icon, and his status as such will only increase after he dies.

In discussing his legacy it seems only to confirm that his time is near. There are very few people who anticipate such a tragedy. Even those who cannot fully comprehend the intense loss that will be felt within South Africa and across the world, will not fail to be affected by it. However, with any luck he will pass peacefully as he deserves to do; he has already lived to a fantastic age and no-one can ask for more.

Although it will be a hard blow for all of his family, friends and admirers, his death must be looked upon as an occasion to celebrate his life and educate those who do not know his story. Only this will do Nelson Mandela the justice that his memory deserves.