He’s got a Rudd-y job to do 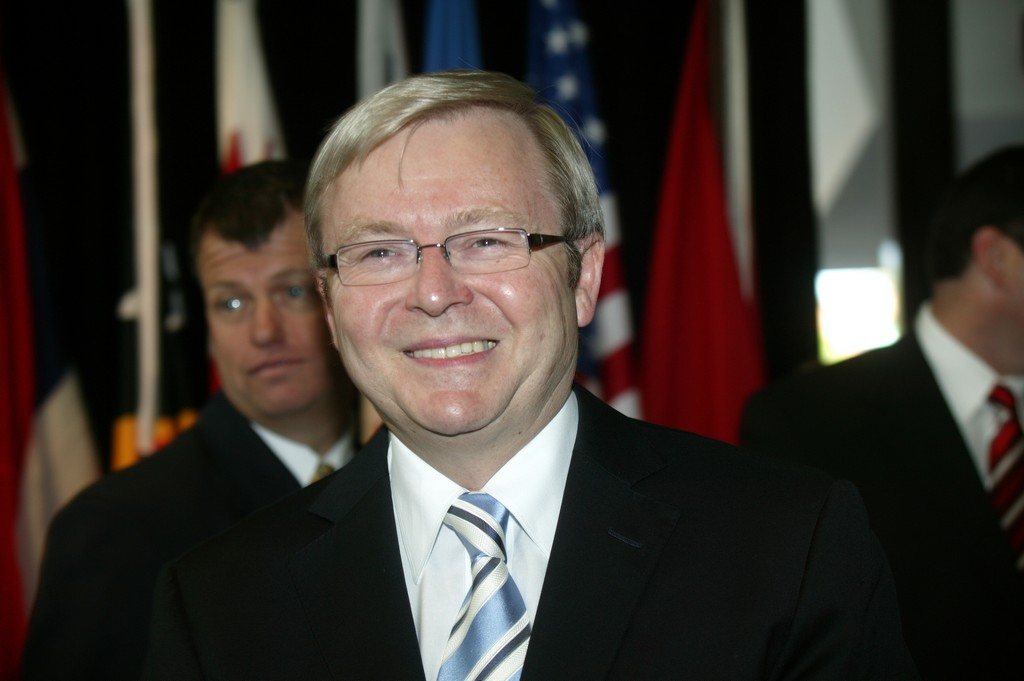 On the 24th of June 2010, when the Australian Prime Minister, Kevin Rudd, bid farewell to the nation, following a coup from his own deputy, Julia Gillard, he cut a forlorn figure. He made an emotional goodbye and apologized for ‘blubbing’ in front of the nation. He steadfastly refused to criticize those who had whipped the ground from underneath his feet and, all in all, he appeared as the broken man of Australian politics.

For those who looked behind the teary exterior, however, this was clearly a man who had unfinished business in Australian politics. This was a man who had just vowed to stay in the Labor Party for another quarter of a century, a man who had vowed to fight for his seat in the election, a man who did not say (as his wife suggested) that it had been ‘an honour and a privilege’; instead, he announced that he had to ‘zip’ and, with that, he left the press conference to the applause of the gathered media. One thing was for sure, though: Kevin Rudd had not thrown in his towel in Australian politics, and he clearly felt a) that social reform was needed in Australia, b) that Australia needed fixing and c) that he was the man to fix it.

One might think that, as ex-leader of the Labor Party, and having just been turfed out in a leadership coup, followed by the closest election since the war, that Kevin Rudd was keen to get his wreckage off the stage, and get as far away from the woman who had taken his job as possible. You might think it would be better to allow Julia Gillard to start afresh with her own cabinet of loyal supporters. But that would be forgetting Rudd’s unfinished business in Australian politics, and, perhaps more importantly, Rudd’s support within Australian politics. It soon became clear that Julia Gillard was going to have to take Rudd and the weight he held in the party in tow – better that than have a bitter ex-Prime Minister bad-mouthing you, across not just Parliament, but the whole country. It was in this vein that Kevin Rudd re-emerged out of the chaos of 2010 as Minister for Foreign Affairs, which would enable him to continue to exert his considerable influence in Australian politics.

Throughout the following year, Julia Gillard carefully navigated through the choppy waters of Australian politics, knowing from her own exploits that there is inevitably a shark waiting to pounce. Every little blow was a threat to her job and, while she gained light relief from passing climate change legislation (which her predecessor failed to do), the watered-down nature of the policy meant that it was only the lightest of relief.

Cut forward to December 2011, and Gillard appeared to be having trouble steering the ship; first attacked for ‘airbrushing’ Rudd from the history books and then, in the same month, attacked from right and left for demoting Kim Carr and, in so doing, losing more members of her crew.

Two months later and it appears that the tussle has reached boiling point again. Gillard is failing to fight accusations that her coup in 2010 was premeditated to the extent that she had written the victory speech beforehand. Meanwhile, she feebly tries to cover the obvious truth that the Labor Party has been split and, not just split, but broken in two. Minister Crean tries to lend his hand to the Gillard cause and insists that Rudd should resign if he is not prepared to be part of the Labor Party team and tow the Gillard line…. It is this last action which causes the final crack in the fragile Labor Party.

On the 22nd of February, the Right Honourable Mr. Rudd, Foreign Minister, stands up; but, this time, he is not a tearful man who has resigned from high office – instead, he is a determined man who will not be made to look a fool again. He announces that Julia Gillard was not prepared to support him publicly and, as such, he has been forced to resign, leaving Gillard embarrassed and stranded in New York without a foreign minister. This time, instead of holding back and being polite, he appears stronger and confronts the ‘invisible men’ who have been churning out attack after attack in an attempt to destroy his reputation and leadership credibility.

While many will accuse Kevin Rudd over the coming weeks of causing a rift in the Labour party and for making Australian politics dysfunctional, there are none who can really blame him. There can be no charge of disloyalty against him which should not first be charges at Julia Gillard, for all he has done is copy Julia Gillard’s tactics. He has shown the mettle he failed to show when he resigned as Prime Minister. There can be no doubt that his political dignity was left in tatters at the hands of his own deputy Prime Minister, who had betrayed him in full view of the world media, but we cannot consider this a vindictive coup.

We must remember the man who had hit zero following a coup against him, a man who felt he had a job to do, a man who looked out across Australia and saw social injustice, a man who looked out across Australia and wanted to fix this injustice. So, regardless of whether Rudd challenges for Prime Minister or not, regardless of what message comes from the Gillard camp over the coming weeks, remember that resignation speech in 2010 and know that whatever Kevin Rudd is doing is what he believes is right for Australia.