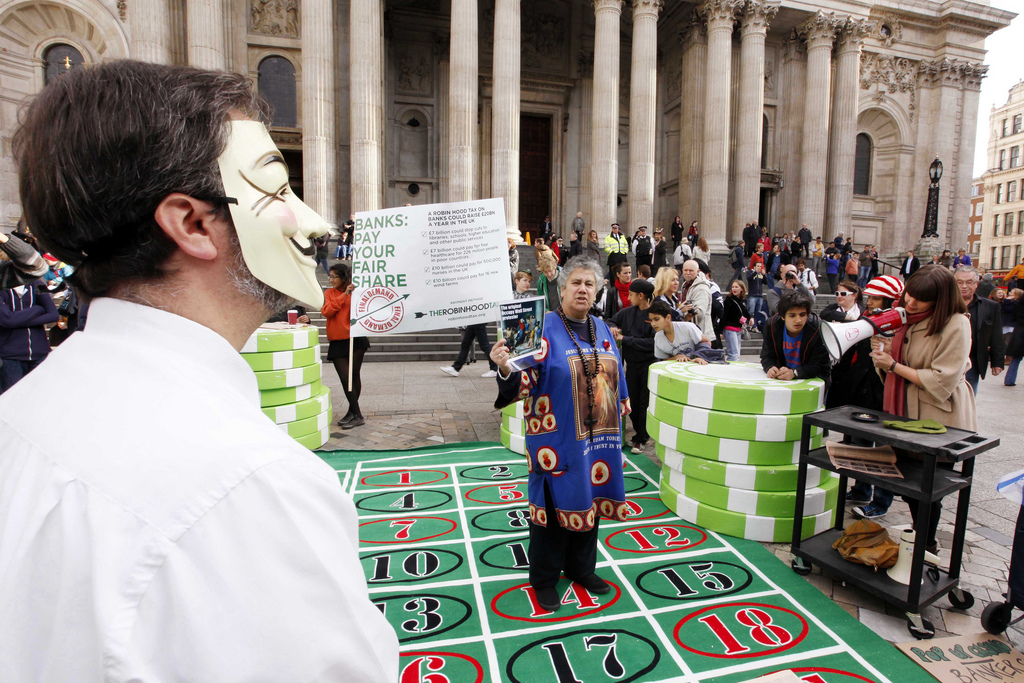 The reason behind the demonstrations is the very real fear that we will return to “business as usual” once this financial crisis has ended. The now global slogan “We are the 99%” originated from the Occupy Wall Street protest because the richest 1% in America now own a staggering 40% of American wealth. In the UK, the top 10% are 100 times wealthier than the bottom 10%. And this is not a problem that has been caused directly by the credit crunch – inequality in this country has been growing steadily over the last 30 years, throughout Conservative and Labour governments alike.

However, while growth was strong, people were often content to put up with such a drastic divide, as long as their individual lot was improving. The credit crunch has thrown this concept out of the window; reckless gambling from financial institutes and governments (directed and influenced by the richest 1%) caused the greatest economic crisis since the war, a bank bailout that has cost 10 times the annual NHS budget, £83 billion in cuts to public services (much of which has yet to take effect) and unemployment over 8%. This is an absolute disaster – but one that is intrinsic to the nature of boom-and-bust gamblers’ economies like ours.

Furthermore, the government has not changed a thing. Before the credit crunch, the Tories called for less banking regulation. Since coming to government, they have introduced no decent banking regulations. They continue to subsidise banks – to the tune of £46 million last year. Furthermore, the director of Her Majesty’s Revenue and Customs (i.e. the tax office), having been wined and dined 3,151 times in three years by corporations, allowed Vodafone and Goldman Sachs to avoid paying £15 million in taxes and fees. No wonder people are protesting!

The Greens would like to see an end to this kind of corporate lobbying of civil servants, as well as the re-establishment of the division between banks (as money-lenders) and building societies (which used to be mutuals to provide mortgages). It is utterly outrageous that institutions are able to gamble people’s homes in order to make a profit, safe in the knowledge that they will be bailed out by the taxpayer if anything goes wrong. I find it richly ironic that those on the right – the people who advocate competition-based utilities like power companies and (arguably) banks – are the very people who support the system where such monstrous government payments go from the taxpayer to banks. I personally would rather see a well-funded education and health system than my money going to prop up risky commercial ventures and bankers’ bonuses.

Further to this, large banks are known to invest in industries like arms manufacturing – something that the banks’ investors (that is, you and me!) should be able to opt out of. The partly nationalised bank RBS (including NatWest) is currently funding the exploitation of Canadian tar sands, which has been described as the biggest potential environmental disaster by humankind ever. We should have a more noble banking system – one that works for the 99% and for the planet, not for directors’ paychecks and oil companies!

Germany’s banking system has weathered this current storm much better than ours. German banks are much more local, without much of the risky investing that characterises our own system. This, along with a decent manufacturing sector, has meant that they have kept afloat and largely recovered from the crunch. The UK however has yet to show any signs of recovery. The Greens (who, after all, started in Germany!) believe in a much more logical and positive banking sector. Investments in reputable, reliable projects (like mortgages) should be administered through mutuals who are not out to make a quick buck. People who want to gamble can visit a casino.

The Occupy movement is a call against the greed of the top 1%. It is a call for a fairer system based on collectivism and cooperation, involvement, localism and justice, not the ever-increasing wealth of the few at the expense of the rest of us.

If you fancy getting involved with an Occupy protest, you can visit the Occupy Newcastle camp at the Monument, a short walk from Newcastle train station. Various Occupy websites include Occupy Newcastle, Occupy Britain, Occupy LSX and Occupy Wall Street.