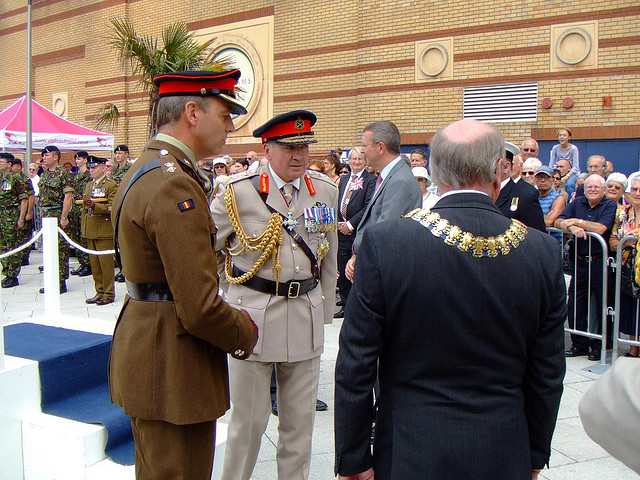 Lord Dannatt is now free to speak his mind

When General Lord Dannatt first arrived at Hatfield College to study Economic History in 1973, it would have been immediately apparent that he was no ordinary student. Indeed, he opened his trunk to reveal his service revolver to a shocked roommate. Dannatt had come to Durham fresh from a tour of duty in Northern Ireland during one of the bloodiest periods of the Troubles.

Speaking at the Durham Light Infantry Museum about his 2010 autobiography, , Dannatt offered an in-depth account of the workings of the British Army over the past 40 years. After his early days in Belfast, he commanded troops in Bosnia, and eventually rose to the position of Chief of the General Staff (CGS) – the professional head of the British Army. During his tenure the army was pushed to breaking point by a war on two fronts, and a Labour government that “didn’t understand” the pressures it was putting on the army.

However, his influence extended far beyond the battlefield. Dannatt crashed into the public consciousness, and onto the front page of newspapers everywhere, through a series of candid public statements and interviews in 2006.

Most controversially, in an interview with The Daily Mail he called for British troops to be withdrawn from Iraq as soon as possible, as he believed that their continued presence was making the security situation worse at home and abroad. This sparked debate about the right of senior military figures to criticize government policy, and Dannatt received (at times) withering criticism from sections of the media who felt he had ventured too far into the political arena. Dannatt himself later helped to fuel the controversy by accepting a peerage from David Cameron and becoming his defence advisor after leaving the army – relinquishing the role after the Conservative election victory in 2010.

In his speech last month, Dannatt explained vividly how his early experiences at the sharp end of 20th Century shaped his military life and helped to form a bold and broad vision for the future of UK defence policy. He recalled being told by a three-star General, after asking for advice on how to deal with the situation in Belfast in the 1970s, simply to try and “muddle through”, as the British Army has “broad shoulders”.

Convinced that there “must be a better way”, General Dannatt’s time in charge of the army was spent easing the burden that those broad shoulders were forced to bear. When he took over the role of CGS in 2006, the strain of fighting a war on two fronts had left the army “running hot”. Poor strategic planning on the part of coalition leaders in Iraq had allowed a vacuum to be created which was filled only too readily by Islamist militias. The same was allowed to happen in Afghanistan.

Dannatt bemoaned this kind of short-sighted approach to defence policy. Time and again he stressed the importance of the properly-resourced campaign plan, led by clear and adequately resourced policies – unlike the “fatally flawed” implementation of defence policy by the Labour government under Tony Blair, which allowed his “high quality” policy work to be sabotaged by a failure on the part of Gordon Brown to allow adequate funding to reach defence, despite the funds being readily available. Quite simply, we were “organised for one war, but fighting two”. And General Dannatt made it clear which war we should have been fighting. In the 2006 Daily Mail interview, he said that the Iraq campaign “effectively kicked the door in”, perilously close to an assertion that we shouldn’t have been there in the first place.

Today, his view on Iraq is tempered by the relative calm that the country now enjoys. Although he admits that history will be “harsh” on the military coalition that invaded in 2003, the fact that “the oil is now flowing in Basra” is proof that Iraq is a better place as a result of the international invasion, which he feels might offer a scrap of comfort to the families of soldiers killed in Iraq.

Although now fully retired from the army, Dannatt remains keen to “shape the agenda”, and his scope is typically wide. He is cautiously optimistic about the Conservative administration, which, despite the £30 billion funding black hole left by Labour, wants to “do the right thing” by defence.

Most importantly of all, he stressed, effective policy work must guide how the increasingly limited defence budget should be spent. In Dannatt’s eyes, this would mean spending less money on anachronisms from the Cold War, such as nuclear weapons, which are ill equipped to deal with the “hybrid threats” facing Britain in the 21st century.

He approves of the new administration’s plan to have a Strategic Defence Review in the lifetime of each parliament, allowing funds to be redistributed as our enemies change and adapt. However, his vision is not of a passive army that simply waits for new enemies to emerge. Given that there is not a “credible external threat” to the UK, he believes that our problems will emerge in the aftermath of failed states – which could mean countries like Somalia.

However, he does not advocate invading a country the second it starts getting into difficulties. The doctrine according to General Dannatt involves pinpointing the next ‘failed state’ and providing investment to stop this from happening, with actual military intervention as a last resort; and if we are forced to intervene militarily, he asserted that the ‘Libyan Model’ of limited intervention is a “good model for the future”, working in harmony with a local population. Even more crucially at this time of economic hardship, it will allow Britain to remain active on the world stage without the cost in “blood and treasure” of a boots-on-the-ground invasion.

In short, his desire to shape the national agenda is undimmed by having left the army. And now that he is outside both the military and political arena, he need no longer pay heed to those ready to denounce him for doing what to him comes naturally – standing up for the interests of the British Army.