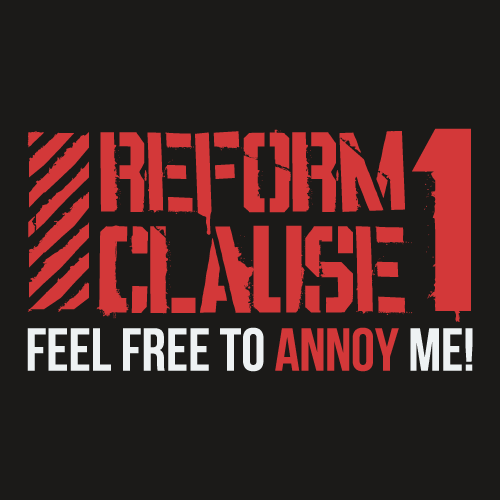 Do we have the right not to be annoyed?

So it’s that time of year again, and no, I refer not to Christmas. It is that time of year that our government decides that we’ve been flaunting and getting away with this ‘liberty’ and ‘freedom’ business for a little too long now, and it’s time to pull in the reins.

It was almost exactly a year ago that I made in support of the campaign to decriminalise the act of ‘insulting’ someone. I’m proud to say that the campaign was a success, and Section 5 of the Public Order Act 1986 was reformed after a vote in the House of Lords in January of this year. But they’re back, and this time it seems as though they’re running out of things to prevent us from doing. This time, they’ve decided that the new greatest threat to civil society is the extensive freedom we have to ‘annoy’ one another.

A proposed new law, contained in the Anti-social Behaviour, Crime and Policing Bill attempts to criminalize annoyance. Clause 1 of the bill introduces “Injunctions to Prevent Nuisance and Annoyance” (IPNAs), which seek to suppress anything deemed to be potentially “annoying”, however vague the justification. IPNAs are set to replace Anti-Social Behaviour Orders (ASBOs).

Under this draft legislation courts may grant an IPNA against a person if they have engaged in – or threaten to engage in – “conduct capable of causing nuisance or annoyance to any person” so long as it is “just and convenient” to do so. This is a lower threshold than ASBOs, where the person must have caused, or be likely to cause “harassment, alarm or distress”. The proposed law includes no defence of ‘reasonableness’, requires only a civil burden of proof, and would give the police powerful new dispersal powers.

Well, what can I say; it parodies itself. The ridiculousness of such a proposition is so self-evident that it barely needs my assistance for its mockery. In many respects, then, this article is somewhat superfluous. You don’t need me to detail for you the absurd scenarios and contradictions that would result from such a law, but as I’m not one to abandon a captive reader, we may as well have some fun.

The irony, of course, is that the constant attempt to curtail free expression is very quickly becoming the greatest source of annoyance in my life, and, I hope, the lives of anyone who cares about such things. And here arises one of those seamless, ready-made contradictions that renders my task unneeded. What are they going to do about that? Are they going to prevent themselves from preventing me from annoying people because it annoys me? Something in the tone of that question inclines me to doubt it. And so the double standard has been born, and the inescapable conundrum of subjectivity has solidified. It is the question I never get tired of asking: who is to be the judge? To whom would you award the task of deciding for you what is too annoying for you to hear? If you wish to absolve yourself from this responsibility, and place it obsequiously in the willing hands of the state, you be my guest, but you must leave me out of it.

This legislation is a continuation of a growing trend, both nationally and internationally, towards a limitation of expression and the encroachment of the state into the private life. This is all justified, of course, in the name of ‘sensitivity’ and ‘toleration’. Utopian no doubt, but it shows an extraordinary lack of vision – or indeed of historical knowledge – to conclude that this is fundamentally a good thing. The potential repercussions for public protests and displays of dissent hardly need mention.

The ambiguity of this legislation, along with the subjectivity of what classifies as ‘annoying’, means that the enforcement of this law would be entirely arbitrary, and dangerously at the discretion of law enforcement officials. The concept of having a law that everyone is in danger of breaking, without knowing exactly why, is the oldest trick of the despot. The danger of being offended, having our feelings hurt, and having to suffer the ‘torture’ of annoyance is quite simply the price we have to pay for living in a free society, and I for one consider it a bargain.

Just in case this new legislation survives the collapse from the weight of its own contradictions, a campaign has been launched by the unlikely partnership of The Christian Institute and the National Secular Society called: ‘Reform Clause 1: Feel Free To Annoy Me!’. The campaign, which is resisting the draft legislation, officially launched at the House of Commons on Wednesday 27 November. I would strongly urge everyone to support the campaign in whichever way you can. Badger your local MPs, post constant campaign updates on Facebook, bore your friends by constantly bringing it up in conversation, go protest in the streets. In other words, be as fantastically annoying as you possibly can, it may be your last opportunity.